For the past eight years, Yumiko Nishimoto, a torchbearer for this summer's Tokyo Olympics, has been planting cherry trees in the northeastern Japan prefecture of Fukushima as a symbol of hope as it seeks to recover from the devastation of the 2011 earthquake, tsunami and nuclear disaster.

Nishimoto, head of a nonprofit organization, has led efforts to plant 20,000 cherry trees along a 163-kilometer major national road near the Pacific coast, which also passes through towns and villages that are still partly uninhabitable. 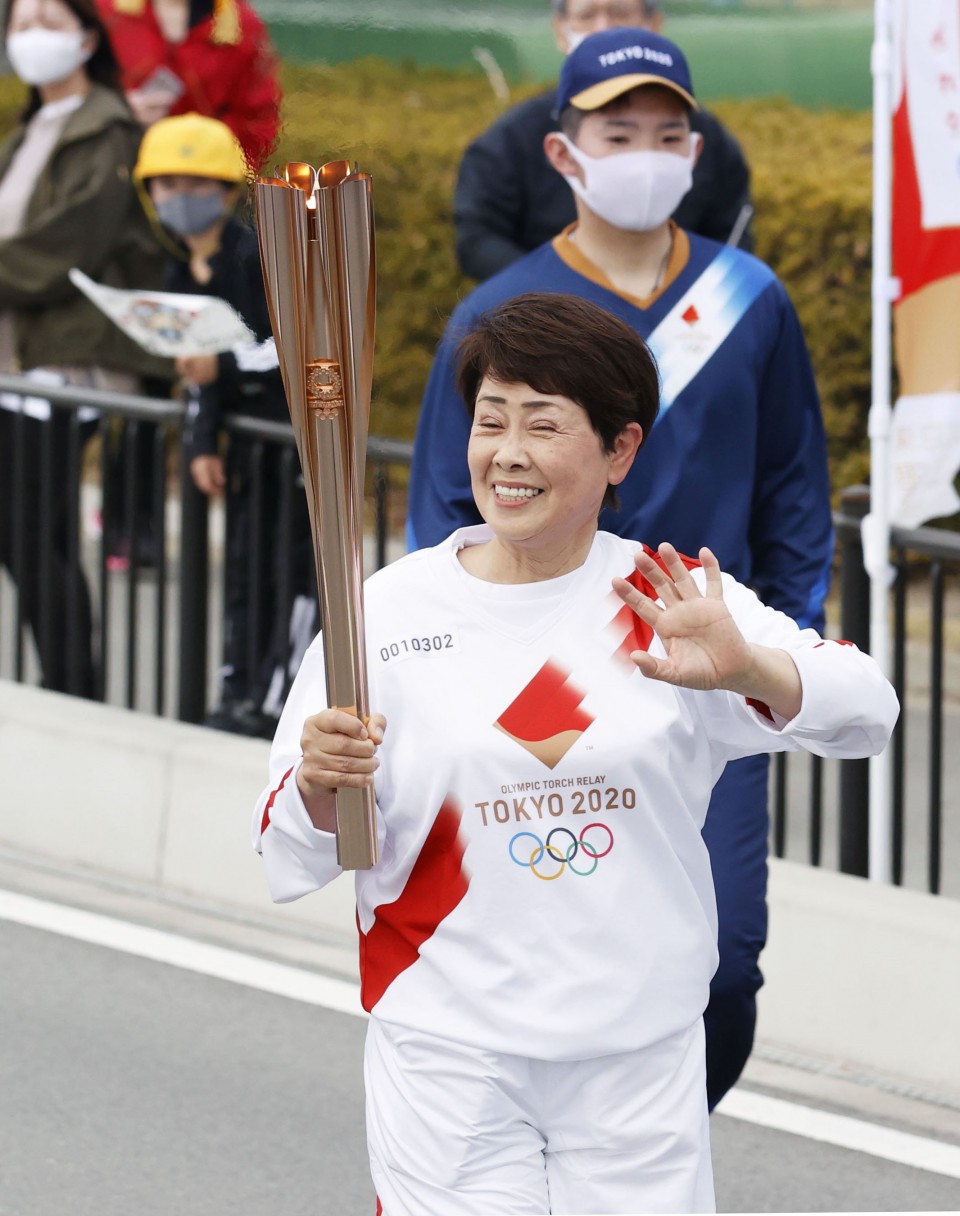 "Many people, including children, have been forced to live far from their hometowns," Nishimoto said in a recent interview. "I want the cherry trees to bring people together when they bloom in spring and introduce the region to people around the world."

Since January 2013, the 67-year-old has planted about 13,000 trees with volunteers, ranging from local high school students to people from outside of Fukushima, in Hamadori -- the easternmost region of the prefecture where the crippled Fukushima Daiichi nuclear plant is located.

A small stretch of that cherry tree road was included in Thursday's opening day of the relay, with Nishimoto among the runners.

Bearing small pink or white flowers, cherry blossoms, or "sakura" in Japanese, are a symbol of spring in Japan. Many festivals are held to celebrate when the flowers bloom, while people have traditionally gathered for "hanami" parties to eat and drink under the trees.

But the trees planted under Nishimoto's sakura project have a meaning beyond that.

Each tree has a pink placard with messages addressing the future, written by former residents of the region, including junior and high school students who were forced to evacuate their homes, or from people who became "owners" of the trees after making financial contributions to the project.

"I want to come back, but I'm scared of seeing how my hometown has changed," said a message from a man who evacuated following the meltdowns at the nuclear plant. Other messages read, "Please don't forget how fortunate you are to have a place you can call home and live life to its fullest," and, "Always remember what happened that day and never give up on your dreams."

Nishimoto, who raised three sons in the town of Hirono, founded a group called "Happy Road Net" more than two decades ago with other mothers after they were asked by local high school students to help them create a better community.

Initially proposed by the students before the catastrophe struck on March 11, 2011, the idea of planting rows of cherry trees was to create beautiful scenery that would help attract more people and businesses to the region -- and ensure that there would be jobs nearby for the students after graduating. 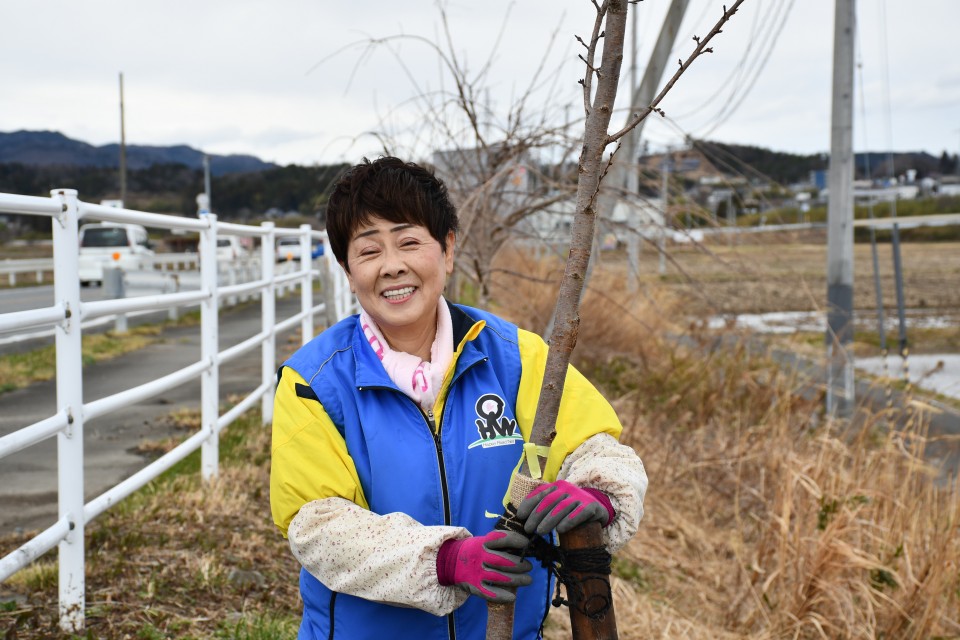 Yumiko Nishimoto stands next to a cherry tree in Naraha, Fukushima Prefecture on March 14, 2021.(Kyodo)

But the magnitude-9.0 earthquake struck and the ensuing tsunami ravaged the coastal area of Fukushima, as well as Miyagi and Iwate prefectures located to its north, triggering the world's worst nuclear crisis since the 1986 Chernobyl accident.

Evacuation orders were issued after tsunami waves hit the Fukushima nuclear plant, causing the release of massive amounts of radioactive material. While decontamination work has progressed over the decade, about 337 square km are still designated as no-go zones.

"We were in no state to plant cherry trees. I evacuated to Tokyo and went back and forth between there and disaster-hit areas delivering emergency supplies," Nishimoto recalled, adding that the tsunami even claimed the life of one of the students who had played a central role in the project.

It was not until 2013 that she started planting the trees with students who remained in the region. In September of that year, Japan won the bid to host the 2020 Summer Olympics in Tokyo.

She said the students thought the Olympic torch relay would be a perfect way to show their hometowns and the cherry trees to the rest of the world as the buildup to the games gains attention overseas. Just about a month after Tokyo was picked as the host city, the students launched campaigns to bring the relay to Hamadori.

Nishimoto and the students met with then Japanese Prime Minister Shinzo Abe and past Olympic ministers to make their voices heard.

"Many people seem to think that Fukushima has not changed since the earthquake and they are surprised when they actually visit," she said. "We wanted people around the world to see Hamadori as it is now, not only as the place that suffered the nuclear accident." 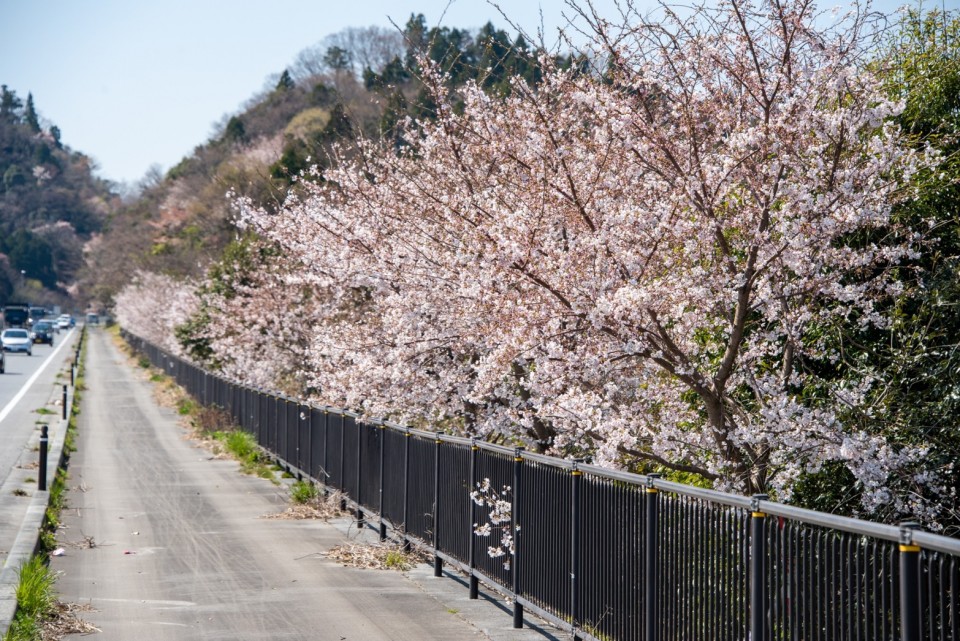 In 2019, the J-Village soccer training center, which was an operational base to handle the accident, was selected as the starting point of the relay. Nishimoto, meanwhile, who lives just a kilometer away, was named one of the 10,000 people to carry the "sakura gold" torch, decorated with a cherry blossom motif, during the 121-day event.

The J-Village is a "treasure" to her, she said. Her third son joined a soccer class there right after it was built and played there for many years, and she too volunteered there and even played soccer with fellow moms.

But the Tokyo Olympics were postponed on March 24 last year, just two days before the start of the torch relay, due to the coronavirus pandemic.

"Everybody has gone through difficult times over the past year. The Tokyo Olympics have been called the reconstruction Olympics, but I want the games to offer hope to people who have suffered due to the coronavirus pandemic as well," she said.

Over the years, the cherry trees planted during cold winter months have become larger and flowered, while more and more people have visited Fukushima to join in the organization's initiative.

"Unlike planting the trees at parks, local people use the road every day so the trees can be seen all the time and be part of their lives," said Toyohito Ikeda, who has visited Fukushima every year since the project's launch.

"The trees will attract people (from other parts of Japan). I think the true meaning of reconstruction is to have people actually come and see the situation with their own eyes," the 59-year-old said.

In mid-March, some 40 people in raincoats, including Ikeda and his wife Megumi, 56, scooped dirt with shovels and planted about 70 trees in slippery and muddy conditions due to heavy rain and wind.

However, planting the trees is the easiest part, Nishimoto said. Because the trees are very delicate, she has been patrolling regularly to make sure that they are growing healthily.

Still, Nishimoto said with a smile that everything is worth it, considering what it will bring to the community.

"The memory of the 2011 devastation may fade one day. But by seeing the flowers in spring, people can be reminded of what happened here," she said. "The cherry blossoms will pass on the experience to the generations to come."