Terunofuji continued to be the class of the Summer Grand Sumo Tournament, improving to 6-0 in a one-sided win and retaining his sole lead on Friday after six days at Tokyo's Ryogoku Kokugikan.

With the spotlight on him following his historic re-promotion to ozeki, Terunofuji seized his favored left-hand overarm hold from the jump and forced No. 5 Hoshoyru (2-4) out with a minimum of fuss. 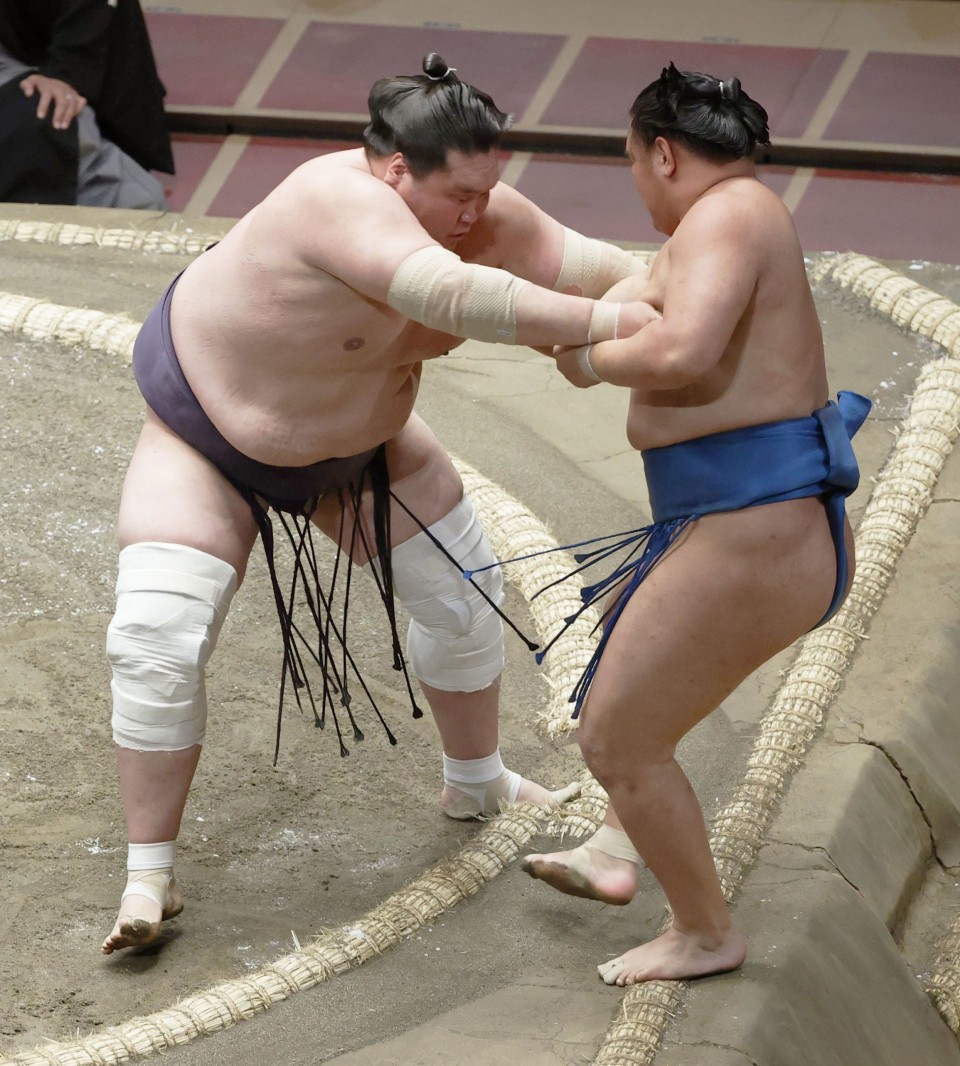 Ozeki Terunofuji (L) defeats Hoshoryu on the sixth day of the Summer Grand Sumo Tournament at Ryogoku Kokugikan in Tokyo on May 14, 2021. (Kyodo) ==Kyodo

The 29-year-old Mongolian is fighting as an ozeki for the first time since September 2017, when knee injuries began taking their toll and eventually dropped him into the sport's second-lowest division.

Terunofuji returned to the top-tier makuuchi division last July, when he won his second career grand tournament. He won his third in March to seal his epic comeback with re-promotion to ozeki.

Friday's makuuchi-division bouts began with eight wrestlers at 4-1, four rank-and-file maegashira and four in the three elite "sanyaku" ranks below yokozuna, komusubi Mitakeumi, sekiwake Takayasu, and the ozeki duo of Takakeisho and Shodai.

When the day's dust had cleared, only Takayasu and Takakeisho remained one win back of Terunofuji.

With 44-time grand tournament champion Hakuho out of action while he recovers from knee surgery, Terunofuji and his three ozeki peers are the main attraction at the 15-day event. After two straight days of four ozeki wins, Friday proved something of a disappointment as both Asanoyama (3-3) and Shodai (4-2) were outclassed.

Takakeisho, however, got the job done, unleashing a ferocious charge that sent No. 2 Tobizaru (1-5) flying from the ring.

Sekiwake Takayasu won a wild entertaining bout with Mitakeumi (4-2), whose record against the former ozeki fell to 6-18. The komusubi came out hard at the jump and repeatedly put Takayasu under pressure but could not finish off his opponent.

Takayasu, a master of straw-bale footwork, twice slipped away along the ring's edge until finally winning a slapping exchange and flinging Mitakeumi out with an overarm throw.

Asanoyama's fight with No. 4 Kiribayama (2-4) developed into a contest of which wrestler could tip the other over at the straw, and Asanoyama simply failed to match his less-heralded opponent's execution.

"He took such a low position and I failed to adjust to that," said Asanoyama.

Top-ranked maegashira Wakatakakage (4-2), whose only losses have come against Takakeisho and Terunofuji, has been one of the tournament's stars with his speed and poise on the opening charge. On Friday, he read No. 5 Onosho's charge perfectly and easily slapped him down to his second defeat.

Sekiwake Takanosho was forced out by komusubi Daieisho, leaving both with 3-3 records.

The Summer tourney is the first in two years after last year's event was canceled following the announcement of a state of emergency. The first three days this time were held behind closed doors due to the current state of emergency in Japan's capital, with up to 5,000 fans allowed to enter from Wednesday in accordance with government guidelines.