Ozeki Terunofuji put on a master class to take the sole lead of the Summer Grand Sumo Tournament on Wednesday, when Tokyo's Ryogoku Kokugikan was opened to fans after the first three days took place behind closed doors.

Terunofuji improved to 4-0 with a powerful display in which he quickly seized control of komusubi Mitakeumi's belt and dumped him out of the ring to his first loss. 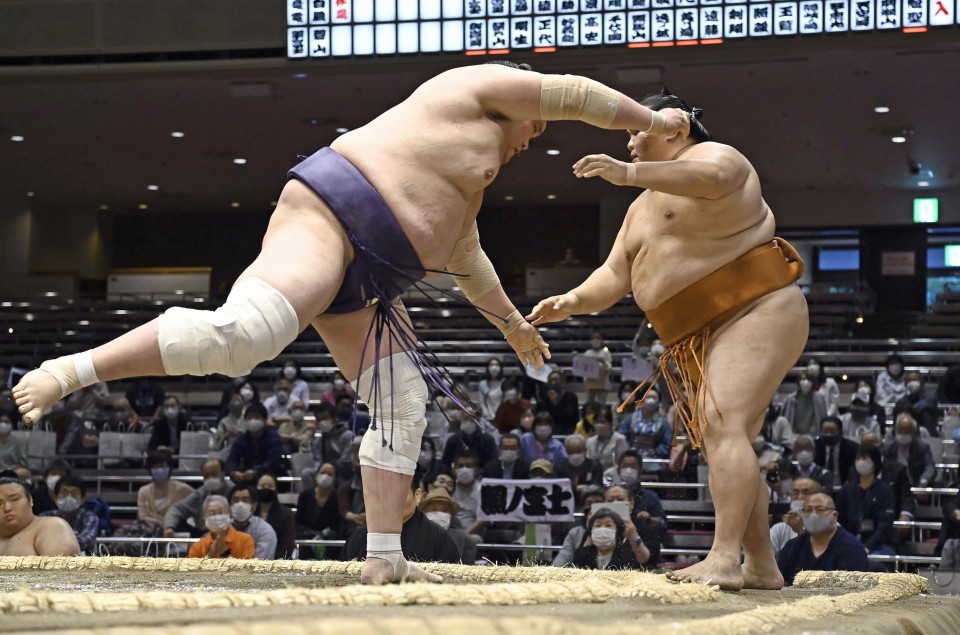 Ozeki Terunofuji (L) defeats Mitakeumi on the fourth day of the Summer Grand Sumo Tournament at Ryogoku Kokugikan in Tokyo on May 12, 2021. (Kyodo) ==Kyodo

The 29-year-old Terunofuji was promoted back to ozeki for this tourney after winning the Emperor's Cup in March and completing a remarkable comeback from knee injuries that at one point left him buried in the sport's fifth-tier jonidan division.

Responding to government guidance due to a coronavirus state of emergency in Tokyo, the Japan Sumo Association started the 15-day tournament in silence. Although the state of emergency remains in effect, the JSA has been allowed to admit up to 5,000 fans from Wednesday.

Even with the sport's lone yokozuna, Hakuho, out of the tournament while he recovers from knee surgery, the fans were treated to some exciting sumo, with all four ozeki winning their bouts.

Seven wrestlers started the day with unbeaten 3-0 records, but the first five to fight all lost, making the day's final clash between Terunofuji and Mitakeumi battle for the sole tournament lead.

Asanoyama (2-2) was quickly forced back and staring a third straight loss in the face, but used some fancy footwork at the end to turn the tables on No. 1 Hokutofuji (0-4). The ozeki at first dug his heels into the straw bales to prevent an easy pushout, but took advantage of a small amount of space to reset his feet.

When Hokutofuji gave it another go, Asanoyama dodged the brunt of his attack, got around the maegashira's flank and forced him out instead.

Sekiwake Takayasu, who is eyeing a future return to his former rank of ozeki, fell to No. 1 maegashira Wakatakakage (3-1), who entered with back-to-back wins over ozeki opponents.

The maegashira repeatedly attacked low, defying Takayasu's attempts to slap and shove him away. Getting in close, Wakatakakage neutralized Takayasu's one-dimensional attack, stood him up and shoved him out.

Sekiwake Takanosho (3-1) was pushed to the brink by a strong charge from No. 4 Myogiryu (0-4). But when the maegashira hesitated and regrouped in order to deliver the decisive shove, Takanosho counterattacked, seized control and forced his opponent backward over the straw bales.

The tournament is the second in history to have matches held behind closed doors after last year's Spring Grand Sumo Tournament in Osaka. Since the cancelation of last year's May tourney, all of the JSA's grand tournaments have been held in Tokyo.