Newly re-promoted ozeki Terunofuji improved to 5-0 on Thursday, passing a tough test from No. 1 maegashira Wakatakakage to retain his sole lead on the fifth day of the Summer Grand Sumo Tournament.

Fighting a wrestler who entered the match on the heels of two wins over ozeki and one over a former ozeki, Terunofuji cautiously sparred with Wakatakakage (3-2) from a distance. 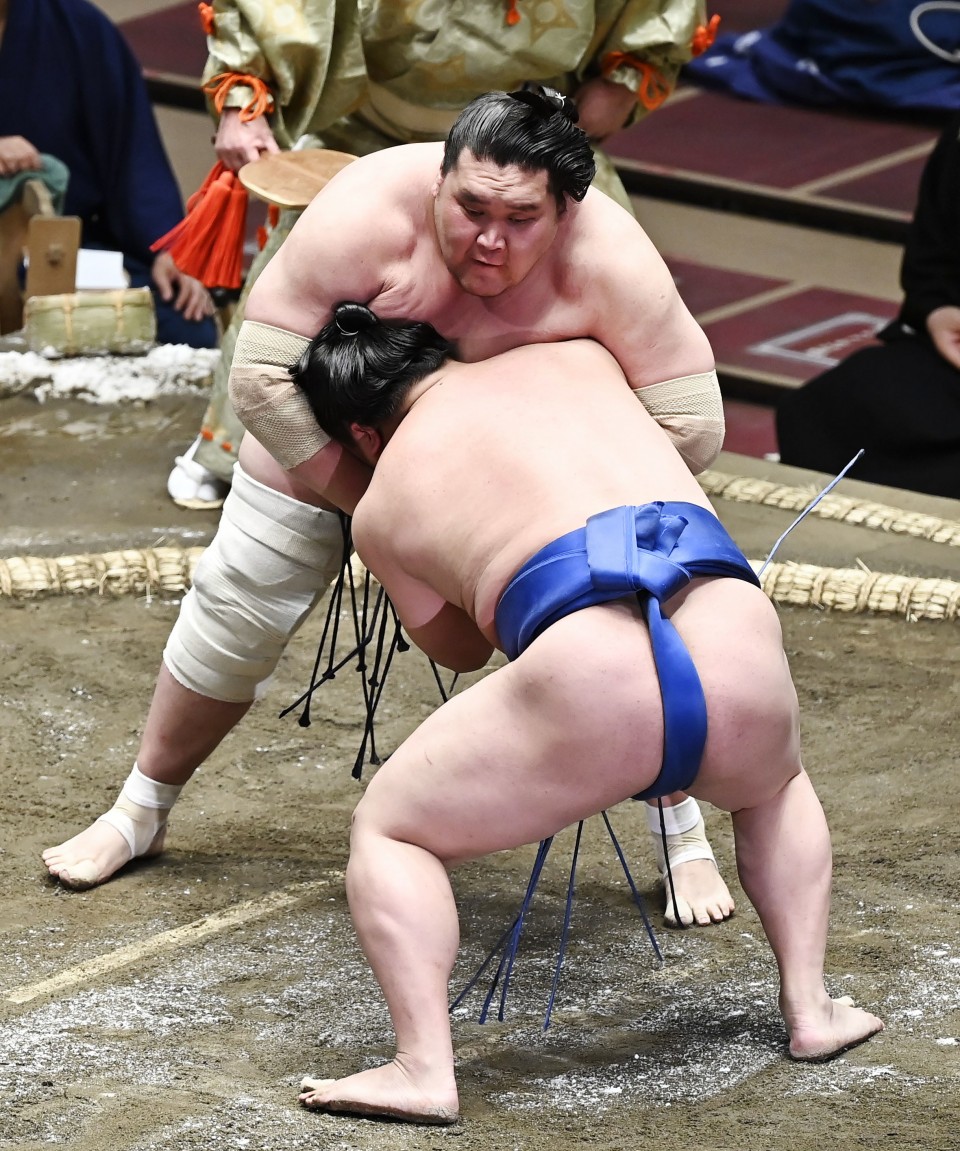 Terunofuji (back) takes down Wakatakakage on the fifth day of the Summer Grand Sumo Tournament in Tokyo on May 13, 2021. (Kyodo)

The maegashira repeatedly moved in for a belt hold to break the stalemate before backing away, until Terunofuji latched on to Wakatakakage's right arm, dragged him to the edge of the ring and forced him out.

The 29-year-old Mongolian is fighting as an ozeki for the first time since September 2017, when knee injuries began to take their toll on his career and dropped him into the sport's second-lowest division. He returned to the top-tier makuuchi division last July, when he won his second career grand tournament. He won his third in March to seal his re-promotion.

With 44-time grand tournament champion Hakuho out of action while he recovers from knee surgery, Terunofuji and his three other ozeki peers are the main attraction at the 15-day event at Tokyo's Ryogoku Kokugikan. And for the second straight day, all four came out unscathed.

Shodai, a relegation-threatened "kadoban" ozeki after his failure to win eight bouts in March, needs eight wins this time to avoid demotion to sekiwake, the sport's third-highest rank, in July. He improved to 4-1 by beating No. 2 Meisei (1-4).

Ozeki Takakeisho (4-1) earned a solid victory, slapping down No. 4 Kiribayama, while ozeki Asanoyama barely avoided defeat to improve to 3-2 with a last-ditch overarm throw of No. 2 Tobizaru (1-4).

Sekiwake Takayasu (4-1), whose lackluster shoving attack on Tuesday left him with first loss, delivered a pushing-and-shoving master class to force komusubi Daieisho (2-3) over the straw.

Komusubi Mitakeumi (4-1), too, shook off a one-sided loss to Terunofuji on Wednesday with a well-executed counterattack to shove out Takanosho to his second loss.

Having been forced back to the straw, the sekiwake tried to dodge the komusubi's final thrust and snatch victory from defeat as he had the day before. But Mitakeumi saw it coming and timed his final shove, striking as Takanosho shifted his weight.

Tamawashi won with a classy shove-out of No. 11 Chiyoshoma (2-3), calmly receiving his opponent's charge deflecting his attempted belt holds, knocking him off balance and driving him out.

The Summer tourney is the first in two years after last year's event was canceled following the announcement of a state of emergency. The first three days this time were held behind closed doors due to the current state of emergency in Japan's capital, with up to 5,000 fans allowed to enter from Wednesday in accordance with government guidelines.