Japanese Foreign Minister Toshimitsu Motegi on Tuesday voiced "grave concerns" over China's unilateral attempts to change the status quo in the East and South China seas on the second day of a meeting of the Group of Seven foreign ministers, the Japanese government said.

As the ministers discussed issues related to China and Russia, Motegi said during the meeting that Japan is also concerned about Beijing's handling of human rights in connection with the Muslim Uyghur minority in the Xinjiang autonomous region as well as the situation in Hong Kong, according to the Japanese Foreign Ministry. 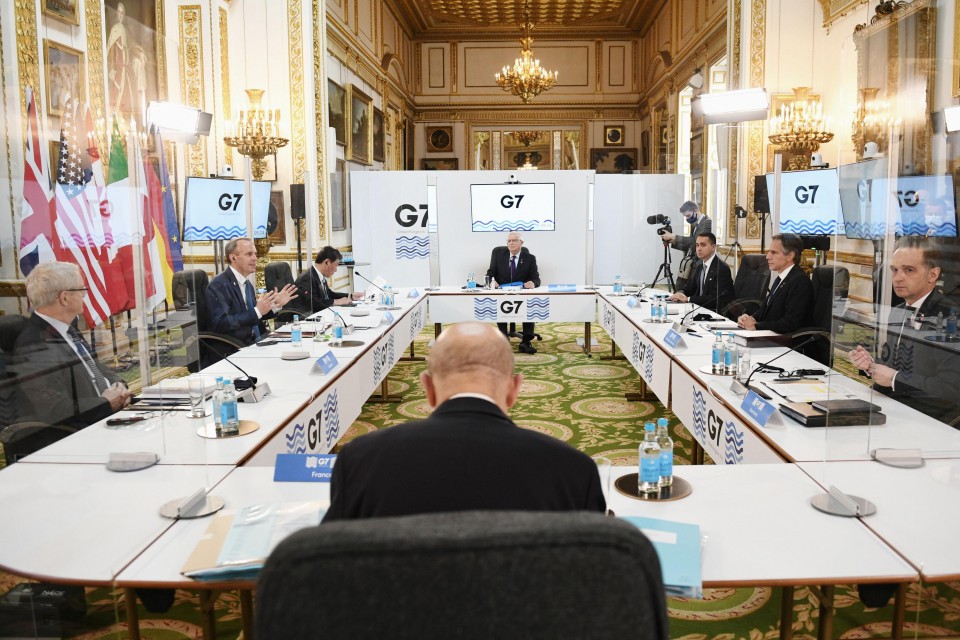 Foreign ministers of the Group of Seven countries sit for talks on May 4, 2021, in London. (Pool/Getty/Kyodo)

British Foreign Secretary Dominic Raab, the chair of the three-day gathering, told reporters that they will issue a joint statement after the meeting to demonstrate their determination to promote open societies, human rights and democracy, in a veiled counter to China and Russia.

U.S. Secretary of State Antony Blinken said unity is important to protect an international rules-based order that has maintained peace and prosperity, according to the State Department. Russia's military buildup near the Ukraine border was raised by Britain during the meeting.

The ministers also discussed the situation in Myanmar, where the violent crackdown on protesters by security forces following the Feb. 1 coup has stoked concerns about human rights issues.

Representatives of India and South Korea were among guests joining the meeting on Tuesday to discuss the promotion of a free and open Indo-Pacific.

The ministers are expected to discuss matters related to the anti-coronavirus response and climate change on the third day of the event before wrapping up the three-day meeting.

The G-7 groups Britain, Canada, France, Germany, Italy, Japan and the United States, as well as the European Union.