Foreign ministers of the Group of Seven industrialized countries on Tuesday condemned violence against peaceful protests by Myanmar's security forces, one day after massive anti-coup demonstrations erupted across the country as people joined a general strike.

"Anyone responding to peaceful protests with violence must be held to account," the G-7 ministers said in a joint statement after a spate of violence that has left three protesters dead, including two in the nation's second-largest city Mandalay on Saturday. 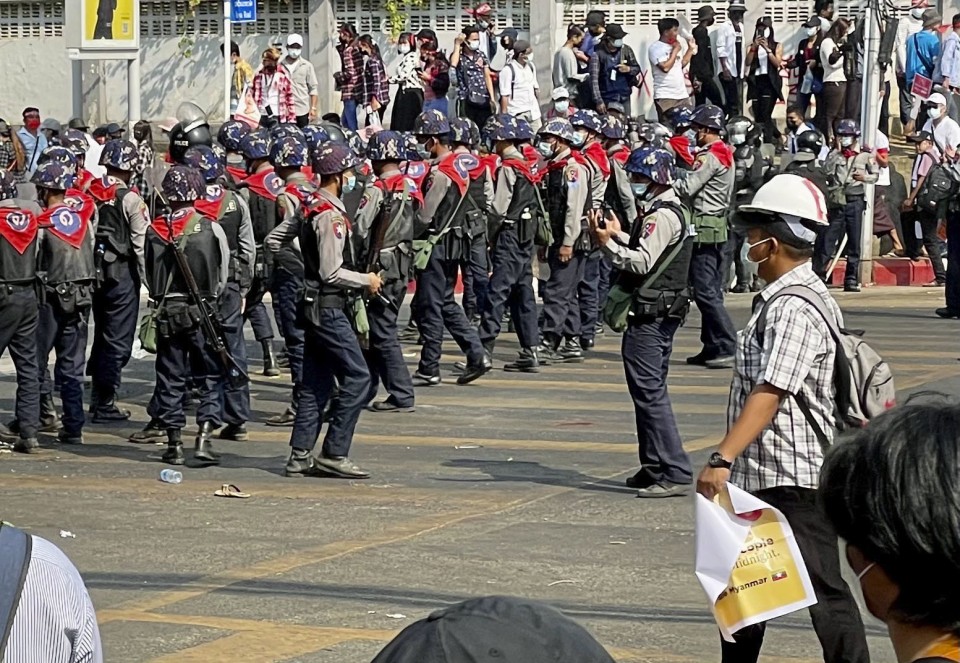 Security forces stand guard in Yangon, Myanmar, on Feb. 22, 2021, as people take to the streets to protest against the Feb. 1 military coup. (Kyodo) ==Kyodo

A young woman who was shot in the head in a Feb. 9 demonstration in the capital Naypyitaw died Friday after 10 days on life support.

The ministers urged the military and police in Myanmar to "exercise utmost restraint and respect human rights and international law" and called for an end to the "systematic targeting of protesters, doctors, civil society and journalists."

They once again called for the "immediate and unconditional release" of officials including ousted civilian leader Aung San Suu Kyi.

The G-7 groups Britain, Canada, France, Germany, Italy, Japan and the United States, as well as the European Union.

Newly subject to the U.S. sanctions are air force chief Gen. Maung Maung Kyaw and Lt. Gen. Moe Myint Tun, who are members of the State Administration Council, the highest decision-making body set up by the military following the coup that ousted Suu Kyi's elected government.

Secretary of State Antony Blinken, in a statement, condemned the violence and suggested additional measures may be forthcoming.

"We condemn the security forces' brutal attacks on unarmed protesters," he said. "We also condemn the ongoing arrests and detentions of hundreds of politicians, human rights defenders and peaceful protestors."

Calling for the restoration of a democratically elected government, the secretary said the United States "will not hesitate to take further action against those who perpetrate violence and suppress the will of the people."

On Feb. 11, the administration of U.S. President Joe Biden said it imposed asset freezes on 10 individuals, including the military chief and coup leader, Senior Gen. Min Aung Hlaing, and three business entities owned or controlled by the military. It also said it was redirecting around $42 million in aid to Myanmar.

The military says a new election will be held after a state of emergency is lifted, with power transferred to the winning party.

But people have taken to the streets daily to protest the coup and are calling for those detained following the takeover to be released. Monday's protests appeared to be largest in the three weeks since the coup, with millions of people participating, according to local media reports.