The foreign ministers of Japan and South Korea held their first talks in more than a year amid soured bilateral ties, but failed to narrow gaps over issues involving wartime history and Tokyo's decision to release treated radioactive water from the crippled Fukushima nuclear plant into the sea.

Meeting with his South Korean counterpart Chung Eui Yong on the fringes of the Group of Seven foreign ministerial gathering in London, Japanese Foreign Minister Toshimitsu Motegi demanded Seoul present at an early date a solution that would be acceptable to Tokyo with regard to the wartime labor and "comfort women" issues, the Japanese Foreign Ministry said. 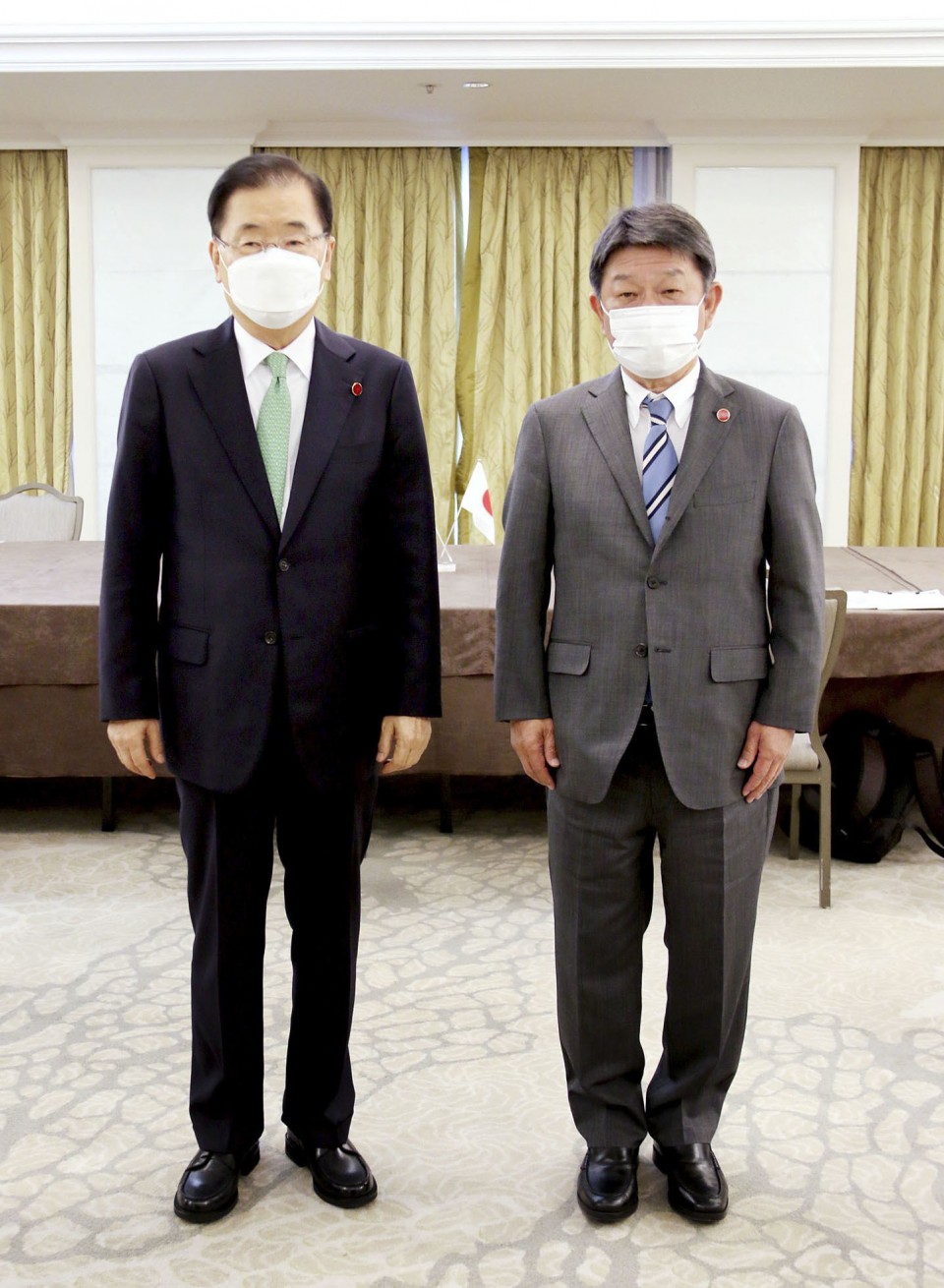 Chung, for his part, said it would be impossible for the two sides to resolve the issues unless Japan has a "correct" perception of history, South Korea's Foreign Ministry said.

The two ministers met for the first time since Chung took the post in February. Mirroring the deteriorated relations, Motegi and Chung had not even held telephone talks.

Motegi also expressed concerns about Seoul's external communications amplifying its opposition to Tokyo's decision to release treated radioactive water from the Fukushima Daiichi nuclear power plant into the sea, according to the Japanese ministry.

Chung voiced "deep concerns" that Japan made the decision on the planned discharge of wastewater without sufficient prior consultation with neighboring countries, the South Korean ministry said, according to Yonhap News Agency.

Motegi said Japan will continue to provide information to South Korea and other parties on the issue.

In mid-April, South Korean President Moon Jae In instructed government officials to actively consider ways to take Japan's decision to the International Tribunal for the Law of the Sea in a bid to stop its neighbor from discharging the water into the sea.

Despite remaining gaps over a range of issues between the two countries, the ministers appeared to keep hope alive for improving bilateral relations.

Motegi told an online press conference after the meeting, "We were able to share the view that we cannot leave the Japan-South Korean relationship as it is."

Motegi also indicated his willingness for another meeting with Chung in the future.

According to the Japanese ministry, the two agreed to continue communication between their ministries in an effort to restore the strained ties.

They shared the view that the two countries should develop relations "in a future-oriented manner," Yonhap quoted the South Korean ministry as saying.

The meeting between Motegi and Chung was held in London as South Korea was invited to the G-7 gathering as a guest along with Australia, India, South Africa and Brunei, this year's chair of the Association of Southeast Asian Nations.

Tokyo-Seoul relations have sunk to their lowest point in decades following South Korean Supreme Court rulings in 2018 that ordered Japanese companies to compensate plaintiffs who were laborers during Japan's 1910-1945 colonial rule of the Korean Peninsula.

Japan takes the position that a 1965 bilateral agreement settled all claims related to its colonial rule of the peninsula, including those of the laborers and former comfort women.

The last foreign ministerial talks the two neighbors held were in February 2020 between Motegi and then South Korean Foreign Minister Kang Kyung Wha in Munich, Germany.

Separately, the two and U.S. Secretary of State Antony Blinken affirmed close coordination in an effort to achieve the complete denuclearization of North Korea, the ministry said.

It marked the first such gathering since the launch in January of U.S. President Joe Biden's administration, which recently completed its policy review on North Korea.

On Monday, Blinken expressed hope that North Korea will return to negotiations toward the goal of denuclearization, saying the Biden administration has made clear that it will pursue "practical" diplomacy on the issue, unlike the grand-bargain style employed by Biden's predecessor Donald Trump.

In the hour-long meeting, Blinken explained to the two key Asian allies the outcome of the policy review and the three affirmed concerted cooperation in promoting the denuclearization of North Korea, according to a Japanese Foreign Ministry official.

Motegi welcomed the U.S. policy review, saying Washington takes into account Tokyo's policy toward Pyongyang and that the Biden administration attaches importance to ensuring close coordination with the two Asian allies in pursuing its North Korea policy, the official said.

The official refrained from revealing details of the U.S. policy review, however.

Blinken and Chung backed Japan's efforts to address North Korea's abduction of Japanese nationals in the 1970s and 1980s, according to the official.

The three ministers met on the sidelines of the Group of Seven foreign ministerial meeting in the British capital.

The three-way talks were initiated by the United States, according to diplomatic sources, after South Korea was invited by Britain to join the G-7 session as a guest along with India, Australia, South Africa and Brunei, this year's chair of the Association of Southeast Asian Nations.

Washington hopes for improved ties between Tokyo and Seoul, seeing that robust trilateral ties are indispensable for curbing Pyongyang's weapons development and keeping an increasingly assertive Beijing in check.