While the South Korean public grows increasingly critical of Japan's decision to release treated radioactive water into the sea, the administration of President Moon Jae In is facing criticism of its own over its seemingly inconsistent stance on the matter.

A local newspaper reported Thursday that a working group within the South Korean government had concluded last year that releasing the water from the stricken Fukushima Daiichi nuclear power plant into the Pacific would not pose a problem from a scientific standpoint. 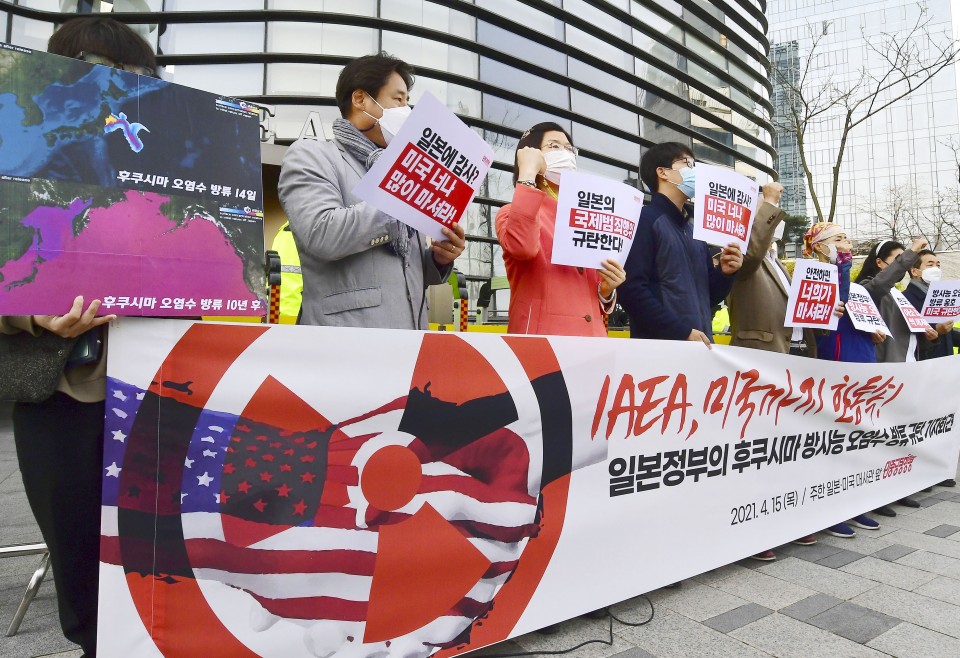 People rally in front of the Japanese Embassy in Seoul on April 15, 2021, to protest against the Japanese government's recent decision to release treated radioactive water from the crippled Fukushima Daiichi nuclear power plant into the sea. (Kyodo) ==Kyodo

According to the JoongAng Ilbo, a working group that was made up of government agencies such as the Oceans and Fisheries Ministry issued a report in October in which the possible impact of the treated water on the country's public and environment had been analyzed.

The group's report said that even if the water reached the sea near South Korea several years after its release, it "would not have a significant impact because the water would be spread and diluted while it is carried by the ocean current."

The report also said tritium, a relative of hydrogen that emits weak radiation, is "difficult to be concentrated or accumulated in a living body," and that there is an "extremely low possibility" of being exposed to radiation by consuming fisheries products.

On Wednesday, one day after the Japanese decision, Moon instructed government officials to actively consider ways to take Japan's decision to the International Tribunal for the Law of the Sea in a bid to stop its neighbor from discharging the water into the sea.

A spokesperson for the main opposition People Power Party criticized the Moon administration for its two seemingly inconsistent positions. "If on the one hand the working group issues a report indicating there is no problem, but the presidential office says on the other hand that we will take legal action, whose words should the people believe?"

A protest rally was held outside the Japanese Embassy in Seoul again on Thursday, with some people also voicing criticism of the United States and the International Atomic Energy Agency over their support for the Japanese plan.

Tuesday's decision by the government of Prime Minister Yoshihide Suga to start discharging the treated water into the sea in around two years' time has sparked strong reactions from Japan's neighbors, such as China and South Korea.

The decision had followed years of discussions on how to dispose of the water used to cool melted fuel at the plant in northeastern Japan, which was hit by a massive earthquake and tsunami in 2011.

Japanese government officials pointed out that other countries with nuclear power plants, including South Korea, have also released treated radioactive water from their plants into the environment.