A group of former "comfort women" in South Korea are set to appeal a local court ruling that dismissed their damages lawsuit against the Japanese government over their treatment at Japanese military brothels during World War II, one of them said Wednesday.

The April 21 ruling by the Seoul Central District Court followed a contrary one in January by the same court but by a different panel of judges that ordered the Japanese government to compensate 12 women, including those who have died since filing the suit.

The appeal plan was announced by Lee Yong Soo, a 92-year-old former comfort woman and one of 20 plaintiffs in the latest case. A person familiar with the case said the appeal is expected to be filed Thursday. 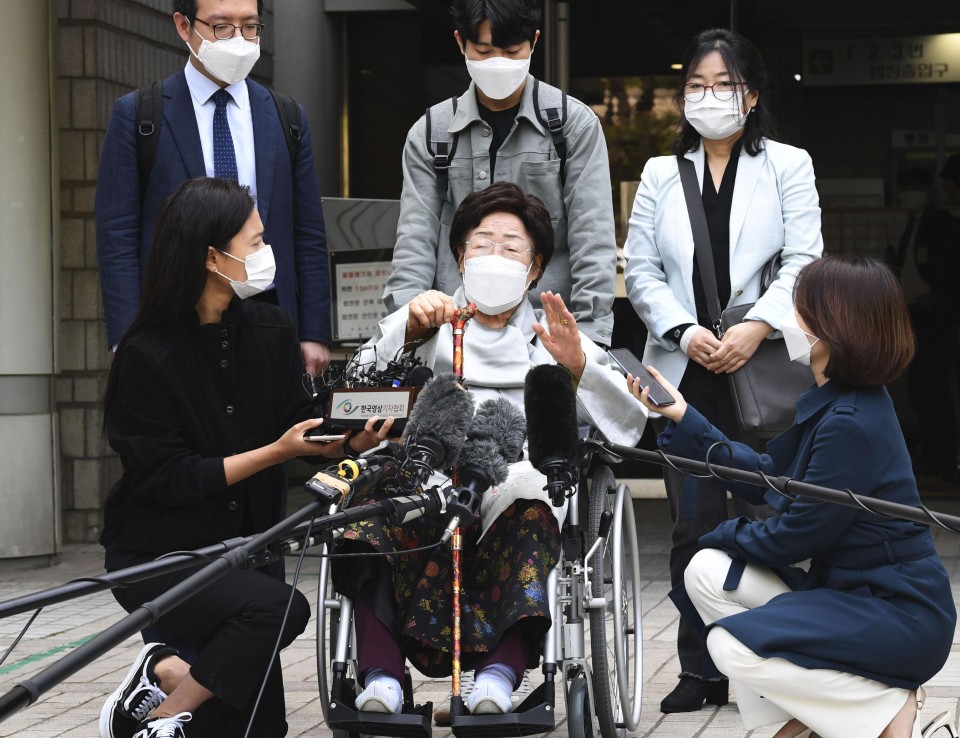 Lee Yong Soo (C), one of 15 surviving "comfort women" acknowledged by the South Korean government, meets the press in Seoul on April 21, 2021, after the Seoul Central District Court dismissed their damages lawsuit against the Japanese government. (Kyodo)

The January ruling was a blow to Japan-South Korea ties, which had already sunk to their lowest level in decades after a series of South Korean top court rulings in late 2018 that ordered compensation from Japanese firms for wartime forced labor.

In dismissing the suit, the April 21 ruling applied sovereign immunity to the case -- a concept under international law that a state is immune from the jurisdiction of a court in a foreign country -- and determined South Korea has no jurisdiction over it.

The Jan. 8 ruling rejected the application of the legal concept. While it has since been finalized, there is no sign the Japanese government would agree to pay compensation to the 12 plaintiffs in the earlier case.

Lee has called on the Japanese and South Korean governments to have the comfort women issue resolved at the International Court of Justice.

Japan has taken the position that all claims related to its 1910-1945 colonial rule of the Korean Peninsula were settled "completely and finally" under a 1965 bilateral agreement under which it provided grants and loans to Seoul.