Terunofuji will contest the upcoming Summer Grand Sumo Tournament as an ozeki, returning to the sport's second-highest rank for the first time in 21 meets, the Japan Sumo Association confirmed Monday in the form of its latest rankings.

The 29-year-old Mongolian sealed promotion by winning the Spring Grand Sumo Tournament in March with a 12-3 record, becoming the first wrestler in history to regain ozeki status after dropping as low as the fifth-tier jonidan division. 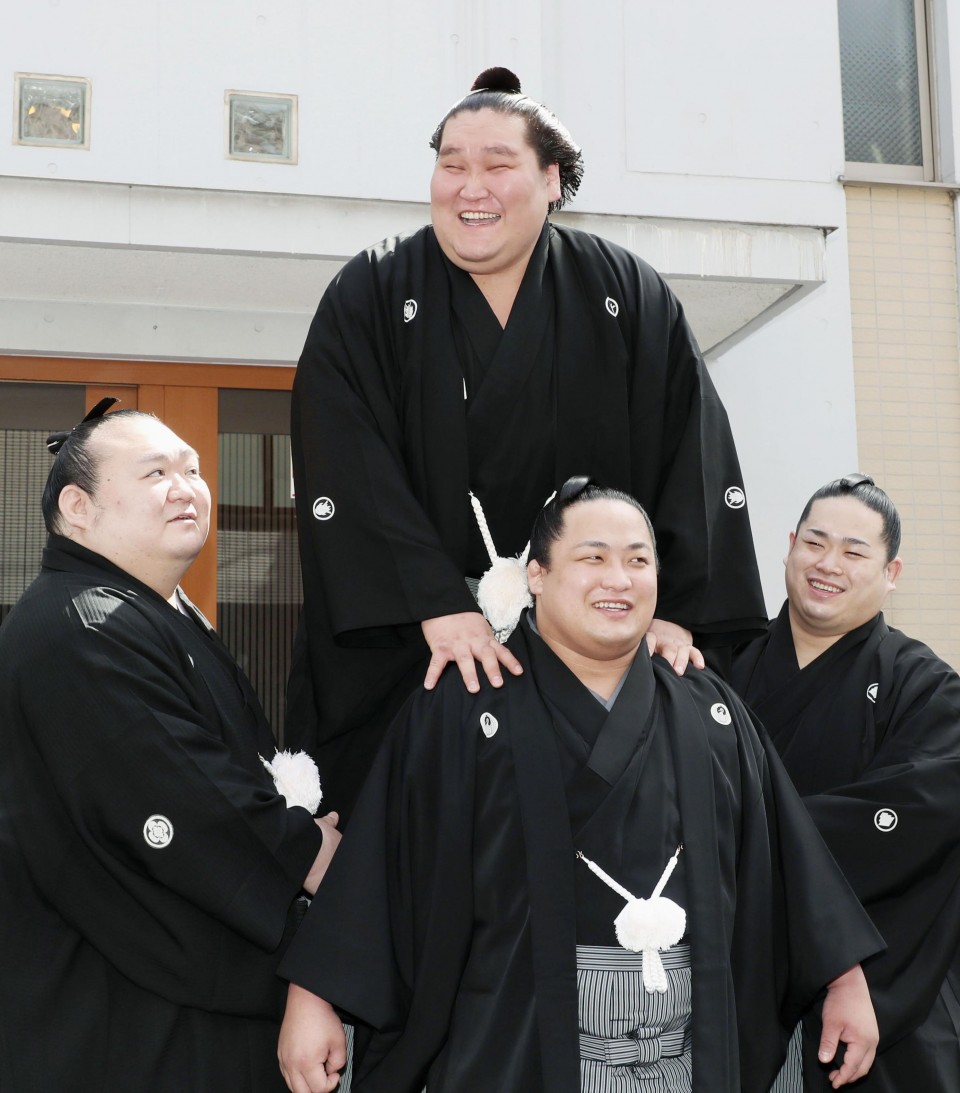 Sumo wrestler Terunofuji (top) celebrates his promotion to the sport's second-highest rank of ozeki as he is hoisted up by stablemates in Tokyo on March 31, 2021. (Kyodo)

Terunofuji, who is ranked behind Takakeisho as the second west ozeki, had plummeted to jonidan in March 2019 following a host of health problems, including injuries requiring surgery on both knees.

Hakuho, who is likely to miss the May 9-23 tourney at Tokyo's Ryogoku Kokugikan after surgery on his troublesome right knee, sits on top of the rankings as the east yokozuna. He is expected to make his return in July's grand tournament.

The winner of a record 44 top-division titles, he is sumo's sole grand champion following the retirement of fellow Mongolian-born grappler Kakuryu during the March meet. It is the first time since September 2012 that only one yokozuna has sat atop the rankings.

The rankings include four ozeki for the first time since the 2019 Nagoya meet. Asanoyama leads the east ozeki ahead of Shodai, who will compete as a demotion-threatened "kadoban" after going 7-8 in March.

Former ozeki Takayasu will fight as a sekiwake from the east following his promotion back to sumo's third-highest rank for the first time in seven tournaments.

Takanosho occupies the west sekiwake position after posting a winning record for the fourth meet in a row.

The May tournament will be the first since 1966 without any wrestlers debuting in either of the sport's top two divisions.

The association announced Monday it will hold the first three days of the tournament behind closed doors as a state of emergency is in place through May 11 for the Japanese capital.

The competition will be the second 15-day meet to open without spectators, following last year's Spring Grand Sumo Tournament, which was held completely behind closed doors.

This year's New Year and March tournaments were also held at Ryogoku Kokugikan under states of emergency, but with admission capped at 5,000 spectators per day in accordance with government guidelines.