Returning ozeki Terunofuji on Monday set his sights on promotion to sumo's highest rank of yokozuna as he vowed to take courage from the recent success of Japanese athletes in other sports.

The 29-year-old Mongolian won the Spring Grand Sumo Tournament in March to seal his second promotion to the second-highest rank of ozeki, a position he last held in September 2017 before falling down the sport's hierarchy. 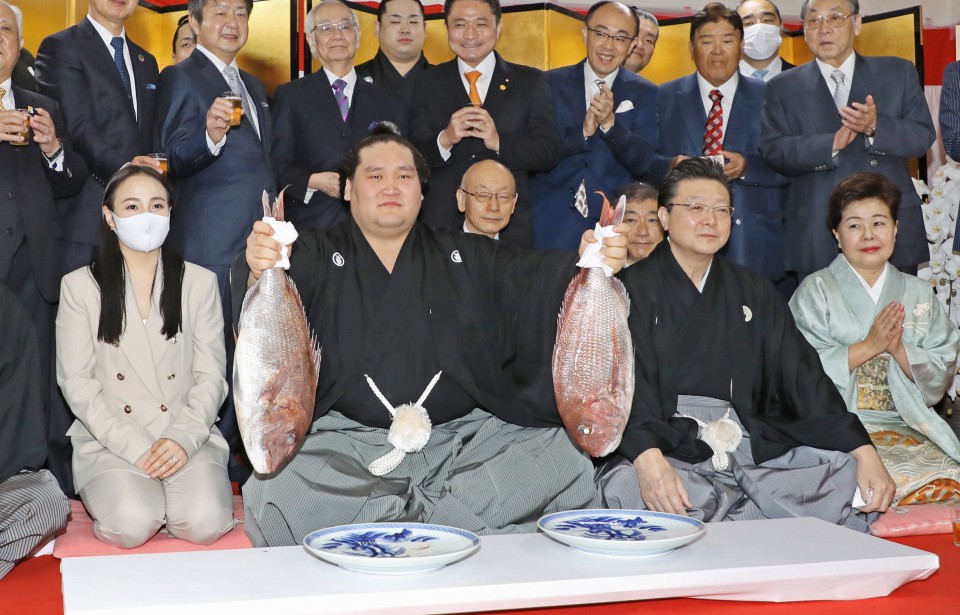 Sumo wrestler Terunofuji (2nd from L) celebrates his promotion to the sport's second-highest rank of ozeki together with his wife (L), stablemaster Isegahama (3rd from L) and supporters in Tokyo on March 31, 2021, following his title win at the 15-day Spring Grand Sumo Tournament through March 28. (Pool photo) (Kyodo) ==Kyodo

"There's only one thing I have yet to experience. I want to have a go (at promotion to yokozuna) at least once, and hope to end my career in a way that makes me feel I've given all I could," Terunofuji said during a telephone interview.

Terunofuji made his debut in May 2011 and won his first promotion to ozeki after May 2015 meet, but injuries to both his knees and illness saw him drop as low as the fifth-tier jonidan division in March 2019.

His remarkable resilience, however, steered him back to claim his second Emperor's Cup in July last year, on his return to the elite makuuchi division, before he captured his memorable third title last month.

Yet despite that feat, Terunofuji believes swimmer Rikako Ikee overcame an even bigger obstacle after the 20-year-old battled back from leukemia to win two relay berths for the Tokyo Olympics this month during the national championships.

"Diseases are scarier than injuries. I'm sure she put in quite an effort," Terunofuji said of Ikee.

"It gives me motivation having athletes from my own generation performing well," Terunofuji said.

Terunofuji had 15 bouts during training at his Isegahama stable on Monday and claimed his condition is improving ahead of the upcoming Summer meet from May 9 at Ryogoku Kokugikan.

An ozeki needs two consecutive championships or a record as good to become a yokozuna, the grand champion of the sport.

"I will be a yokozuna if I produce results, and it will be because of my lack of effort if I can't. I just need to do what I've been doing," Terunofuji said.