A man held on suspicion of causing Taiwan's worst train derailment in seven decades was positively identified as being at the scene of the accident, authorities said on Tuesday.

Wang Kwo-tsai, deputy minister of transportation and communications, confirmed that the suspect, Lee Yi-hsiang, is the man seen in a photograph, believed to have been taken by a survivor of the accident, standing on top of a hill looking down at the accident with other spectators, whose identities have yet to be confirmed. 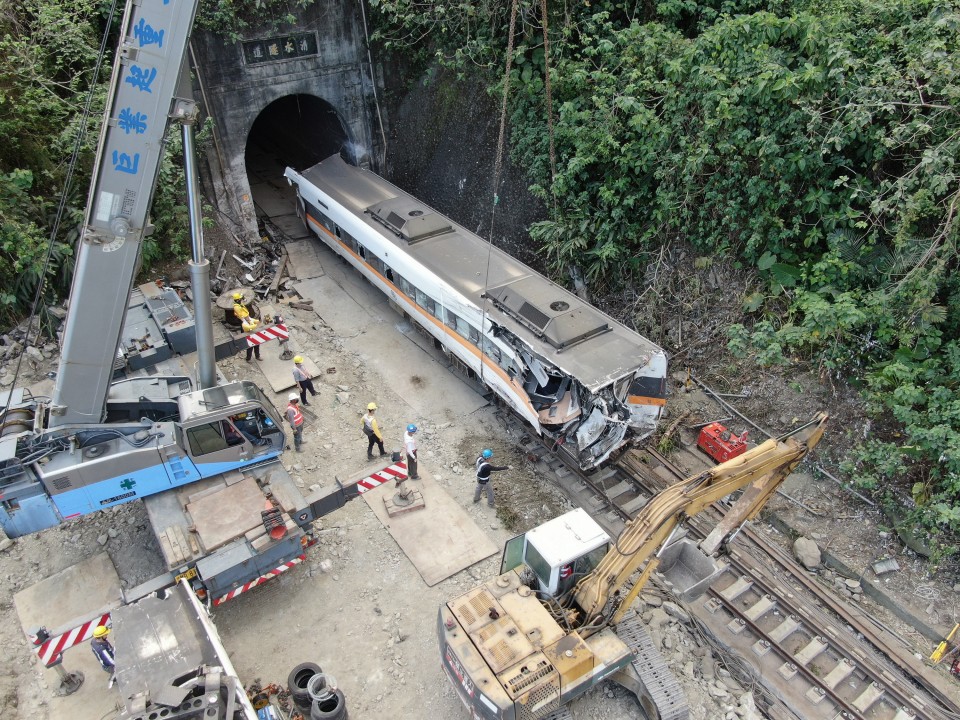 Workers remove a derailed train from a tunnel in Hualien County in eastern Taiwan on April 6, 2021. (Central News Agency/Kyodo)

Lee is the driver of a crane truck that rolled down a slope on April 2, hitting an express train as it was passing through a tunnel. Authorities suspect that the truck was parked without the emergency brake engaged.

Lee was detained on April 4 and released on bail of NT$500,000 ($17,515) the following day. But earlier Sunday, following an appeal from prosecutors, he was again remanded in custody after the high court in the county overruled the district court's decision to release him, ordering the lower court to reconsider its ruling.

Investigators have taken steps to provisionally seize his assets to prevent him from transferring his personal assets and those under his two companies.

It is unclear why Lee was at the construction site on the day of the accident as the TRA had ordered all construction work to be halted during the four-day Tomb Sweeping holiday.

Prosecutors are pursuing charges of negligent homicide against Lee, who has apologized for what happened.

Authorities said the accident left 50 people dead and more than 200 injured as of Tuesday.

Transportation Safety Board Chairman Young Hong-tsu told a press conference on Tuesday that after examining evidence currently available, it was determined that the driver of the No. 408 Taroko train had less than seven seconds to react before the train rammed into the crane truck lying on the track 40 meters ahead of the tunnel.

Li Gang, convenor of the board's Rail Occurrence Investigation Division, said as the eight-car express train was carrying 498 people and traveling within the speed limit of 130 kilometers per hour, it would have needed at least 500 to 600 meters to bring the 358-ton train to a complete stop.

Authorities found that before the crane truck rolled down the slope, its engine had been turned off. It said the brakes of the vehicle had been modified without the certification of the manufacturer.

Li said they have learned that more vehicles and other people were also at the construction site on the day of the accident.

Meanwhile, the Ministry of Health and Welfare dismissed criticism that it launched a donation campaign to help pay for the losses incurred in this accident, emphasizing that the account was established in accordance with the law and precedents.

Seeking to appease critics, President Tsai Ing-wen said on Tuesday that all expenses for which the government is found to be responsible will be paid for out of the government budget, including any compensation to the victims.