Some 120 passengers were standing in the express train that derailed in a tunnel in eastern Taiwan on Friday killing 50 people, indicating the seating arrangements could have pushed up the death toll, Taiwan authorities and media said Sunday.

Out of total of 498 passengers, 122 were standing in the train with eight cars running at a maximum speed of 130 kilometers per hour, the authorities said. Witnesses of the accident that happened at 9:28 a.m. said it looked as if all the standing passengers fell down when the train derailed. 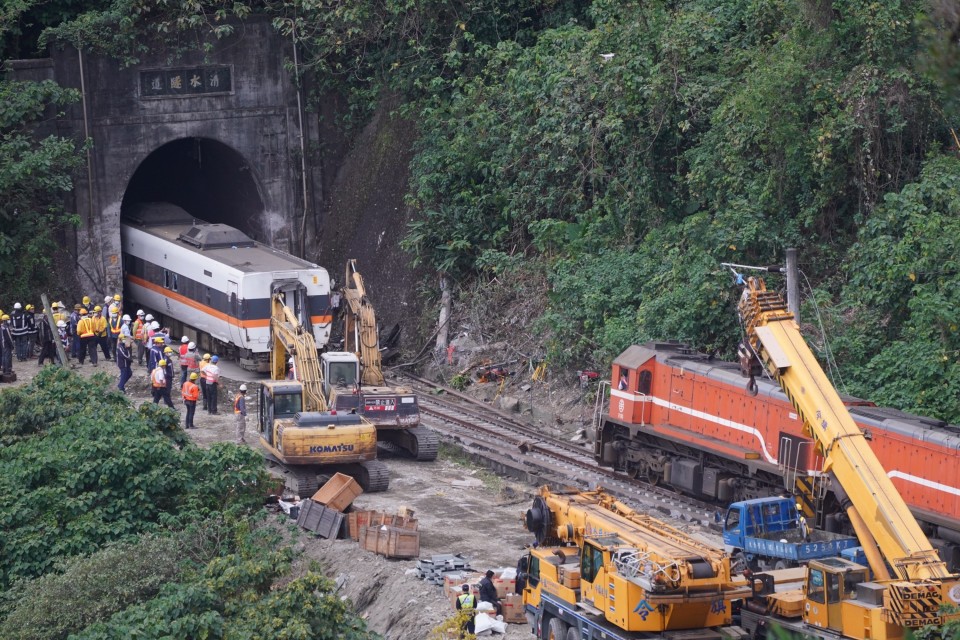 Workers on April 4, 2021 use power shovels and a diesel locomotive to remove from a tunnel carriages damaged following the deadly derailment of an express train in Hualien County in eastern Taiwan (Central News Agency/Kyodo)

The authorities said they will examine the relation between the seating arrangements and the large number of casualties, considering putting a restriction on the capacity of standing train passengers.

Packed with passengers on the first day of the Chingming tomb-sweeping festival, a four-day holiday period dedicated to offering prayers to ancestors, the train was traveling from Shulin, an inner city district in southwestern New Taipei City, to Taitung on the southeastern coast when it derailed while passing through the Qingshui tunnel, 30 km north of Hualien City.

Calling the accident "the island's worst rail disaster in seven decades," the authorities said that casualties stood at 50 dead and 202 injured as of Sunday.

Among those who died were a 5-year-old girl, a Frenchman who would have turned 28 on Sunday, and two American women in their 20s. The train driver, 32, and his 31-year-old assistant also lost their lives.

Regarding the cause of the accident, the authorities suggested in a preliminary report that the derailment might have been triggered by a truck parked without the emergency brake engaged on a slope that rolling down and hit the express train.

The truck was parked there by a driver surnamed Lee, a construction site manager working for the Taiwan Railway Administration.

Television footage Sunday showed Lee read a statement apologizing for what happened while trying to fight back tears. He was taken to a district court in Hualien County on Friday for questioning and released Saturday.

But earlier Sunday, the high court in the county overruled the district court's decision to release him, ordering the lower court to reconsider following prosecutors' appeal on Saturday.

Prosecutors are pursuing charges of negligent homicide against Lee.

Meanwhile, Transportation Minister Lin Chia-lung offered to resign over the disaster. But President Tsai Ing-wen rejected the offer, saying it is not the time to discuss a resignation, according to a spokesman of the president.

Tsai visited Hualien on Saturday and vowed a "rigorous investigation" into the cause of the accident.

Premier Su Tseng-chang, who visited the crash site and hospitals in the area on Friday, has apologized twice on behalf of the government.

Deputy Transportation Minister Wang Kwo-tsai told a press conference on Sunday the train service will not resume until everything has been confirmed safe.

The Foreign Ministry said at least 90 countries expressed condolences via various means, including Japan, the United States, and mainland China, as well as Pope Francis and the Dalai Lama.