A crane truck driver held responsible for Taiwan's worst rail disaster in seven decades was released on bail on Saturday, as the death toll rose to 51.

Television footage showed the man, surnamed Lee, saying "I'm sorry" as he walked out of the District Court in Hualien County, eastern Taiwan, after being freed on bail of NT$500,000 (US$17,515). 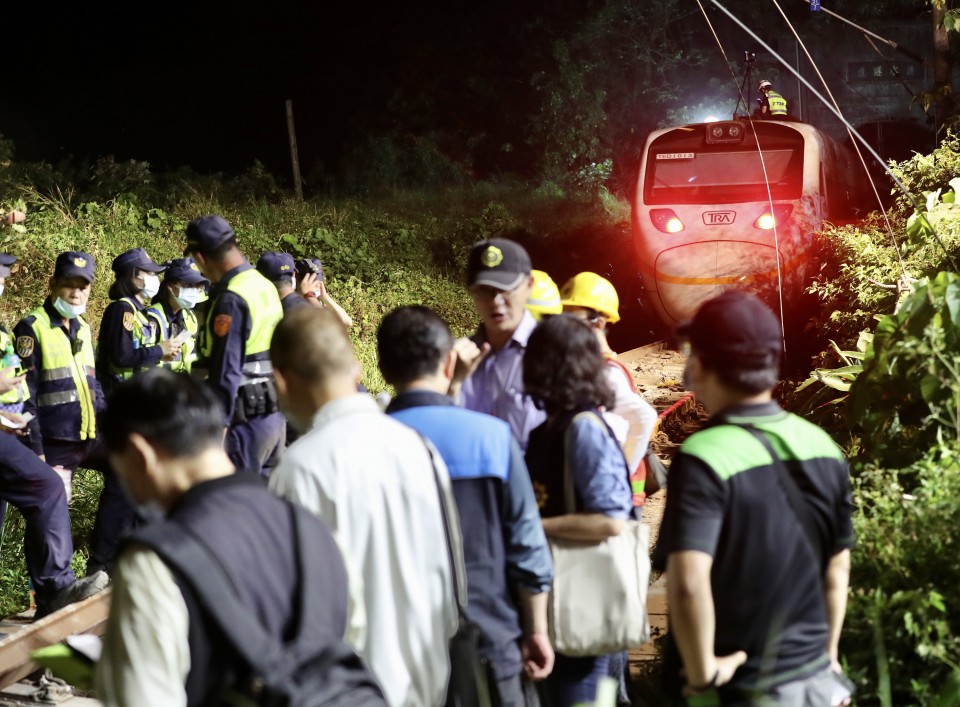 Investigators collect evidence at the site of the deadly derailment of an express train in Hualien County in eastern Taiwan on April 2, 2021. (Central News Agency/Kyodo)

Railway authorities have said the driver, whose truck was parked on a slope near a rail tunnel, might have been forgotten to engage the emergency brake, causing the vehicle to roll down and hit the express train when it was passing.

Calling the accident "the island's worst rail disaster in seven decades," the authorities said that casualties stood at 51 dead and 188 injured as of Saturday evening.

Among those who died were a 5-year-old girl and a Frenchman who would have turned 28 on Sunday. An American woman in her 20s was identified as a fatality on Saturday. The train driver, 32, and his 31-year-old assistant also lost their lives.

The accident happened at 9:28 a.m. on Friday, the first day of the Chingming tomb-sweeping festival, a four-day holiday period dedicated to offering prayers to ancestors.

The No. 408 Taroko, with eight cars carrying 496 people, was traveling from Shulin, an inner city district in southwestern New Taipei City, to Taitung on the southeastern coast when it derailed while passing through Qingshui Tunnel, some 30 kilometers north of Hualien City.

President Tsai Ing-wen, who visited Hualien on Saturday, vowed a "rigorous investigation" into the cause of the accident.

Premier Su Tseng-chang, who visited the crash site and hospitals in the area on Friday, apologized again on Saturday on behalf of the government for what happened.

Minister of Transportation and Communications Lin Chia-lung said he was deeply saddened by the accident and promised to shoulder political responsibility when the time comes.

The Foreign Ministry thanked at least 80 countries expressing condolences via various means, including Japan, the United States and mainland China.

China's state-run Xinhua News Agency reported that Chinese leader Xi Jinping expressed grave concern over the accident, mourned the deaths of "our compatriots," offered condolences to their families and wished those injured a speedy recovery.