South Korean President Moon Jae In on Wednesday instructed government officials to consider taking Japan to the International Tribunal for the Law of the Sea to block its decision to release treated radioactive water from the crippled Fukushima Daiichi nuclear power plant into the sea, the presidential office said.

The move to consider taking a legal action against Japan at the tribunal in Hamburg, Germany, came after the Japanese government's decision a day earlier triggered strong public opposition in South Korea. 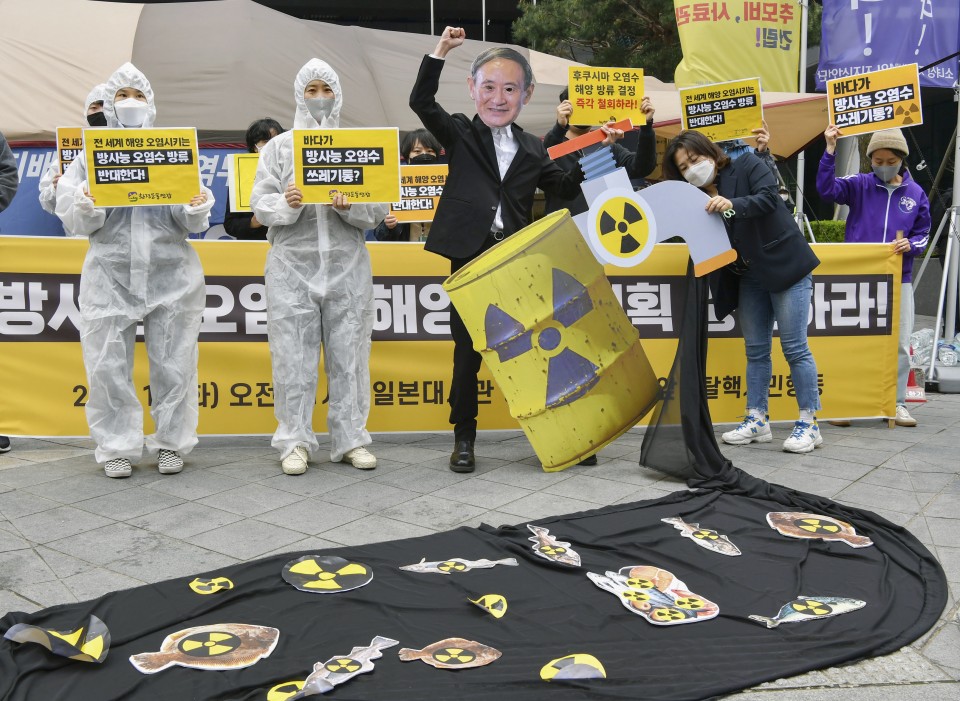 South Korean environmental group members gather near the Japanese Embassy in Seoul on April 13, 2021, to protest against the Japanese government's decision earlier in the day to release treated radioactive water from the crippled Fukushima Daiichi nuclear power plant into the sea, with one (C) of them wearing a mask of Japanese Prime Minister Yoshihide Suga. (Kyodo) ==Kyodo

At a time when bilateral ties have sunk to their lowest point in decades over issues related to Japan's 1910-1945 colonial rule of the Korean Peninsula, the dispute about the release of the treated water into the Pacific Ocean has emerged as a new problem between the two countries.

Moon expressed great concern over the plan to Japan's new ambassador to South Korea, Koichi Aiboshi, on Wednesday when he met him to receive his credentials.

"South Korea is greatly concerned as the two nations are geographically closest and share the sea," Moon told Aiboshi, according to the presidential office.

Moon instructed officials to consider options that include seeking a provisional measure from the tribunal to stop the release of the water, according to the office.

In Tokyo, Chief Cabinet Secretary Katsunobu Kato said the Japanese government has yet to receive a notice from the South Korean government about such consideration of a legal action, but added, "Japan will offer careful explanations to the international community to foster understanding" of its water release plan.

"In releasing ALPS treated water, Japan will make sure to follow international laws as well as regulations and rules within and outside of Japan to ensure safety," Kato added, referring to an advanced liquid processing system, or ALPS, that removes various radioactive materials from contaminated water.

On Tuesday, Japanese Prime Minister Yoshihide Suga finalized the decision and said, "Disposing of the treated water is an unavoidable issue for decommissioning the Fukushima Daiichi plant," vowing to ensure "more than adequate" compliance with safety standards and to take steps to protect the fishery industry.

South Korea has opposed to the release of what it calls "contaminated water" as the treatment leaves tritium, a relative of hydrogen that emits weak radiation, unremoved. Japan has said the treated water with the material poses no safety concerns.

Japanese government officials said other nations including South Korea have discharged tritium into the sea and into the air.

The Japanese Embassy in Seoul said on its website that tritium released from the South Korean nuclear plants amounted to 360 trillion becquerels in 2018, explaining the amount is based on the information from Korea Hydro & Nuclear Power Co., operator of nuclear power plants in South Korea.

In the water accumulated at the Fukushima plant, tritium totaled some 860 trillion becquerels as of March 2020, according to the plant's operator, Tokyo Electric Power Company Holdings Inc.

However, Korea Hydro & Nuclear Power told Kyodo News that the company has treated the radioactive material from the plants so that it does not cause any damage to the environment.