Local fishermen expressed anger and frustration at the Japanese government's decision Tuesday to release treated water from the crippled Fukushima Daiichi nuclear power plant into the sea, fearing their efforts to restore fishing following the 2011 disaster will go down the drain.

The controversial move came at "the worst time" for fishermen who are stepping up preparations for the restart of full-fledged coastal fishing off Fukushima Prefecture, northeastern Japan, after years of small-scale, trial fishing -- complete with safety checks for radioactive materials to win back consumer trust -- ended in March. 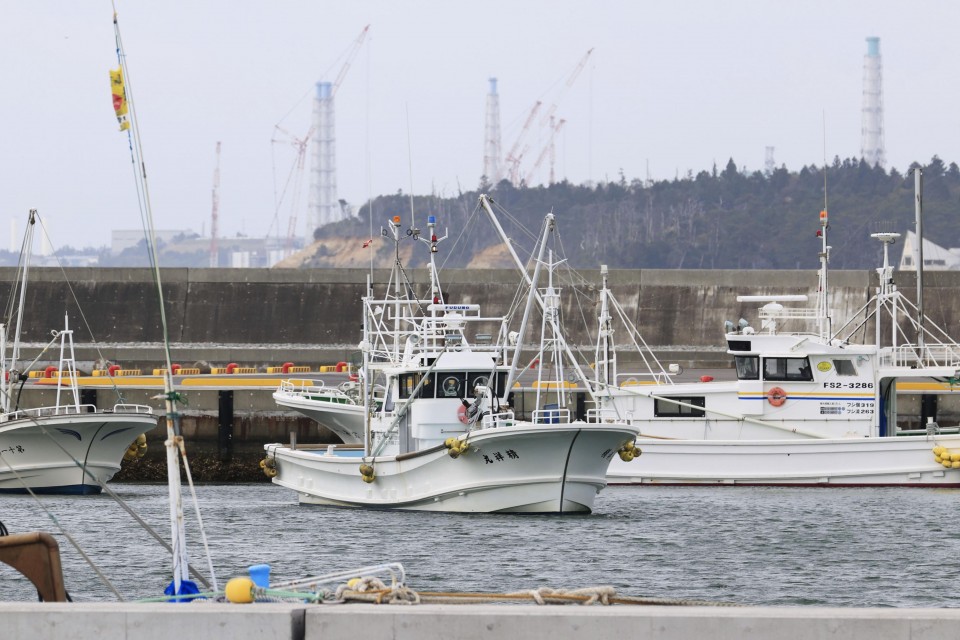 Photo taken on April 13, 2021, shows fishing vessels at a port in Namie in Fukushima Prefecture, northeastern Japan. The Japanese government decided the same day to release treated radioactive water from the crippled Fukushima Daiichi nuclear power plant into the sea despite the worries of local fishermen. (Kyodo) ==Kyodo

"Why now? I'm strongly opposed to the release (of treated water)," said Yoshimi Terashima, a fisherman from the Fukushima town of Shinchi. "I want to go fishing every day like I used to," said the 73-year-old, who can do so only twice a week at present.

At the Nakoso fishing port in Iwaki, Fukushima Prefecture, Katsuo Watanabe, 82, learned about the government decision as he was fixing his fishing equipment.

"The shortage of successors became more serious after the nuclear accident. If (the treated water) is released into the sea, more young people will see no future for the industry and fishing in Fukushima will decline," Watanabe said.

The government of Prime Minister Yoshihide Suga decided to release into the sea treated radioactive water that has been accumulating at the Fukushima plant, with the controversial operation expected to start in two years' time.

Most radioactive materials such as strontium and cesium are removed from water pumped into the damaged reactors to cool the melted fuel but tritium, which is said to pose little risk to humans in low concentration, remains.

Hiroshi Kishi, who heads the national federation of fisheries cooperatives, called the formal government decision "extremely regrettable and totally unacceptable" in the group's "strong protest." He had expressed firm opposition to the government's move when he met Suga last week.

Kishi took issue with the government's reversal of its earlier stance to gain local approval first.

"It severely hurts the feelings of fishermen not only in Fukushima but across the nation," Kishi said in a statement.

The fishing industry in Fukushima has been grappling with reputational damage and struggling to restore consumer confidence in its marine products. Fukushima Gov. Masao Uchibori deferred judgment on the government's decision when he met with industry minister Hiroshi Kajiyama on Tuesday.

Marine farmers in neighboring Miyagi Prefecture fretted over the possibility that the government move will hurt their business prospects further.

Miyagi is a big producer of sea squirts, accounting for over 40 percent of the total in Japan, but they are among fishery products covered by an import ban imposed by South Korea following the 2011 nuclear accident caused by a massive earthquake and tsunami.

"It will move the lifting of the South Korean embargo further away," said Katsuyuki Atsumi, 62, who is in the sea squirt-farming business in Ishinomaki, one of the areas hit hard by the natural disaster.

Still, some expressed understanding regarding the decision, with the feasibility of plant operator Tokyo Electric Power Company Holdings Inc.'s road map for scrapping the nuclear complex by 2041 to 2051 increasingly in question after a series of delays.

"To move the decommissioning of the plant forward, we cannot keep the treated water stored forever," said Nobuyuki Aizawa, 69, who runs a seafood processing firm in Natori, Miyagi Prefecture.

One of the challenges in the decommissioning process is how to dispose of around 1.25 million tons of treated water in tanks on the premises.