Hideki Matsuyama won the Masters at Augusta National Golf Club on Sunday to become the first player from Japan to claim a men's major championship.

Matsuyama finished one stroke ahead of American rookie Will Zalatoris after carding four birdies and five bogies for a final-round score of 73 and 10-under for the four days.

He started the final round 11 under par with a four-stroke lead over four golfers -- England's Justin Rose, Australia's Marc Leishman and Americans Xander Schauffele and Zalatoris. 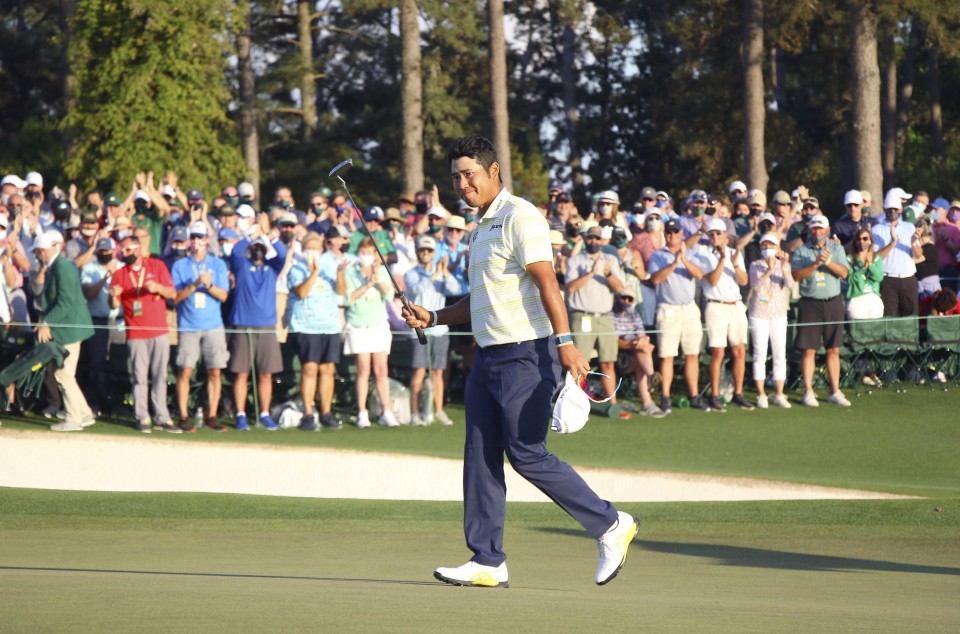 Matsuyama survived some late slip-ups, and a determined challenge down the back nine from Schauffele, who finished 7-under, to claim the iconic green jacket in dramatic fashion.

The 27-year-old Schauffele carded four straight birdies before his challenge ended with a triple-bogey on the par-3 16th.

"I felt nervous from the start of the day and right through until the end," Matsuyama said. "I was thinking about (my family) all the way around. I'm really happy I was able to play well for them."

Matsuyama recovered from an opening-hole bogey with birdies on the second, eighth and ninth. He stretched his lead to six shots on the back nine, but left the door open for Schauffele when he hit the water going for the green in two on the par-5 15th.

Following Schauffele's fourth straight birdie, the lead was down to two shots with three to play, but the American's nightmare on the 16th hole all but ensured the 29-year-old Matsuyama's victory.

Matsuyama landed in the bunker on the 18th, but blasted his way onto the green to give himself two putts to win the title in his 10th appearance at the tournament.

"Until last week, I hadn't even been in the top 10 (on the tour) or contended for a title this year. I had no expectations, but in Wednesday's practice my shots started to feel good again, and I began to think I might have a chance," Matsuyama said.

The native of Ehime Prefecture on the island of Shikoku said he hoped to lead the way for other Japanese golfers to win majors. 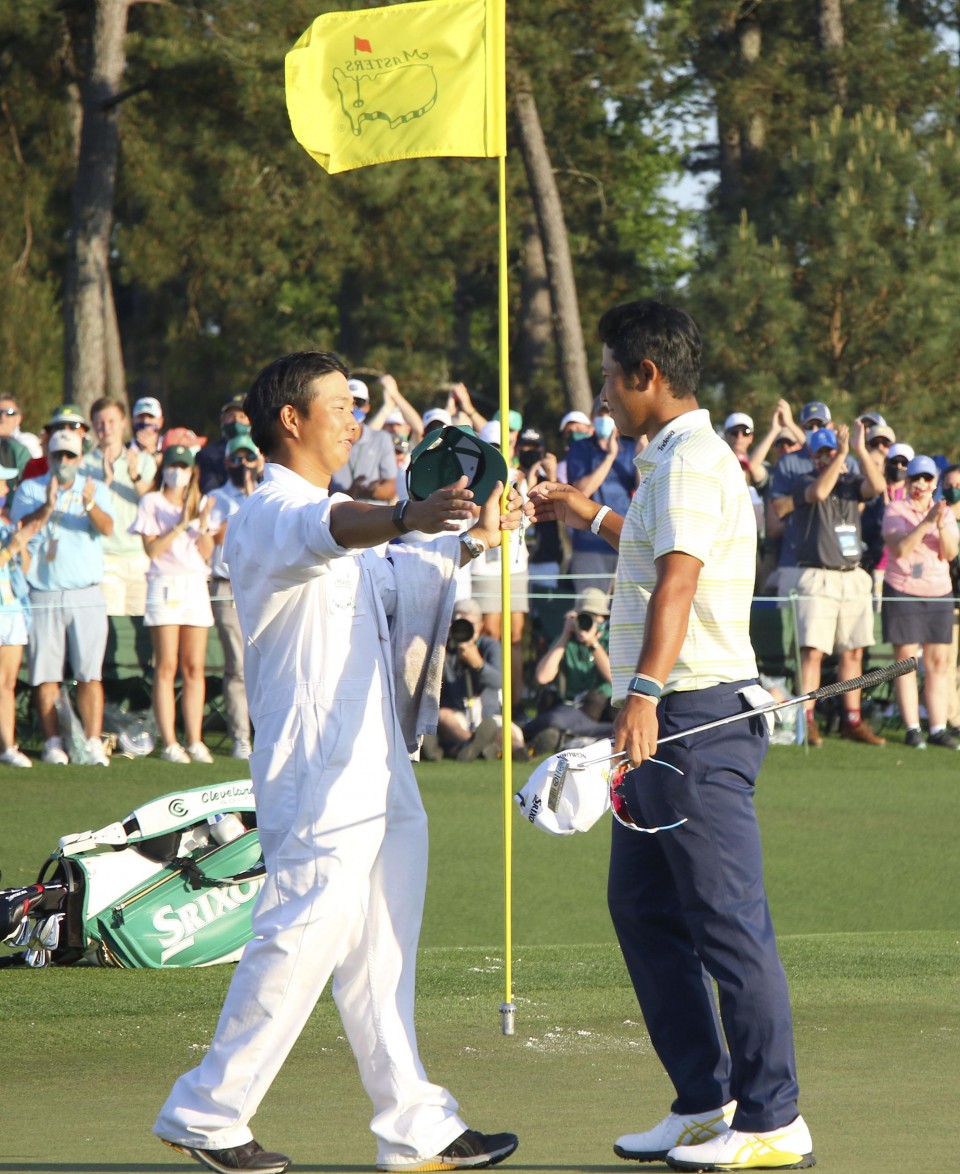 Hideki Matsuyama (R) of Japan greets his caddie on the 18th green after Matsuyama won the Masters Tournament on April 11, 2021, at Augusta National Golf Club in Augusta, Georgia. Matsuyama became the first player from Japan to claim a men's major championship. (Kyodo) ==Kyodo

"Hopefully I'll be a pioneer and many other Japanese will follow," he said.

"I'll be really happy if my victory here inspires children watching on TV to reach this stage in five or 10 years' time and compete against me. For that reason, I want to keep on winning."

The 24-year-old Zalatoris, playing two groups in front of Matsuyama, was bidding to become the first player since Fuzzy Zoeller in 1979 to win the Masters on his debut.

He birdied two of his last four holes to card a final round of 70 and miss a playoff with Matsuyama by a single stroke.

Tiger Woods, a five-time winner of the green jacket, was among the golf luminaries to congratulate Matsuyama on his victory.

In a Twitter post, Woods acknowledged the significance of the result for both Matsuyama's home country and the world of golf.

"Making Japan proud Hideki. Congratulations on such a huge accomplishment for you and your country. This historical (Masters) win will impact the entire golf world," Woods tweeted.

Japan Golf Tour Chairman Isao Aoki, a longtime member of the PGA Tour, lauded Matsuyama for his hard work, saying the win was a dream-come-true for Japanese golf fans.

"Every golf fan in the country has waited a long time for this moment. It must have taken blood, sweat and tears to become a Masters champion. I hope he will continue with such heart, patience and skill," Aoki said. 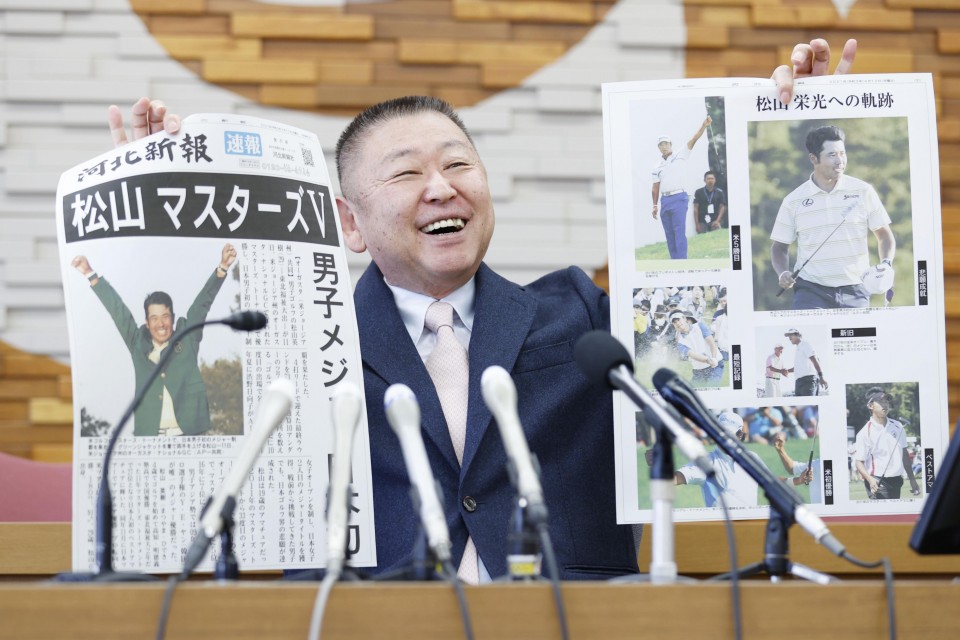 Matsuyama is the second golfer from an Asian country to clinch a men's major, following South Korean Y.E. Yang's PGA Championship win in 2009.

A five-time winner on the PGA Tour and eight-time winner on the Japan Golf Tour, Matsuyama made his Masters debut a decade ago as an amateur. Only weeks after his university town of Sendai was hit by the March 11 earthquake and tsunami disaster, Matsuyama finished in a tie for 27th as the tournament's low-scoring amateur. 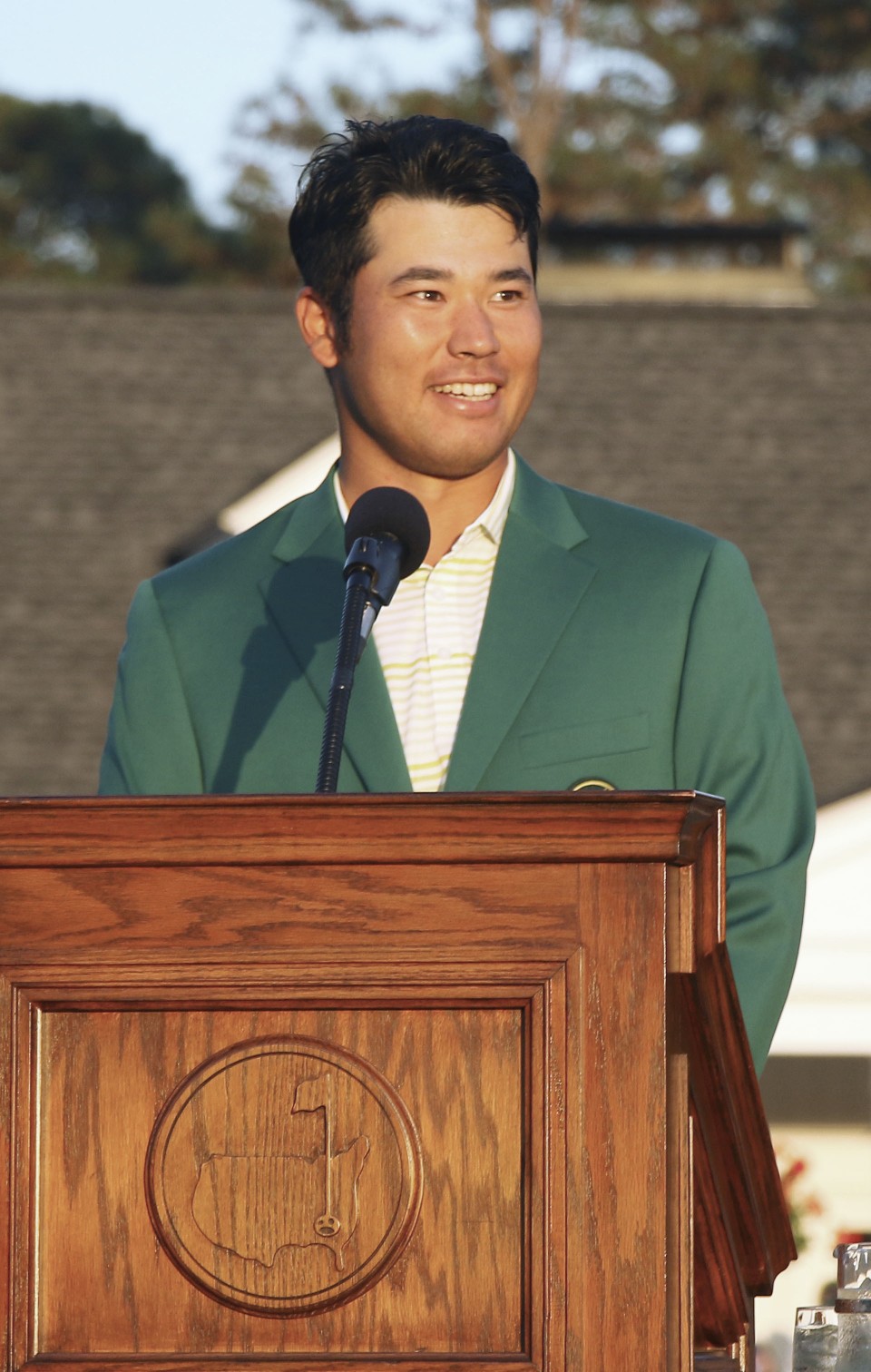 "I had the chance to come here 10 years ago and I could change myself. It was great I could deliver good news to those who gave me the push then," Matsuyama said. "I made them nervous toward the end so next time I win, I hope to finish on a strong note."

Two women from Japan have won majors -- Hisako Higuchi at the 1977 LPGA Championship and Hinako Shibuno at the 2019 Women's British Open.

"I was really proud as a Japanese compatriot. Congratulations, so much that the word itself cannot express," said Shibuno, while Higuchi lauded "a win at the majors that the whole country has been longing for."

Matsuyama has three more majors this season with the PGA Championship in May, the U.S. Open in June and the British Open in July.

Looking ahead, Matsuyama wants to win a gold medal for Japan on home soil this summer at the Tokyo Olympic Games, which have been postponed by a year because of the coronavirus pandemic.

"If (the Olympics) are held, I want to aim for gold. I think my experience today will serve me well to that end," he said.