He also said in an interview that the U.N. nuclear watchdog's involvement, including dispatches of experts, would lend credibility and offer reassurance about environmental safety. Japan's insistence that the water does not pose a danger to health is disputed by neighboring countries as well as domestic fishing groups. 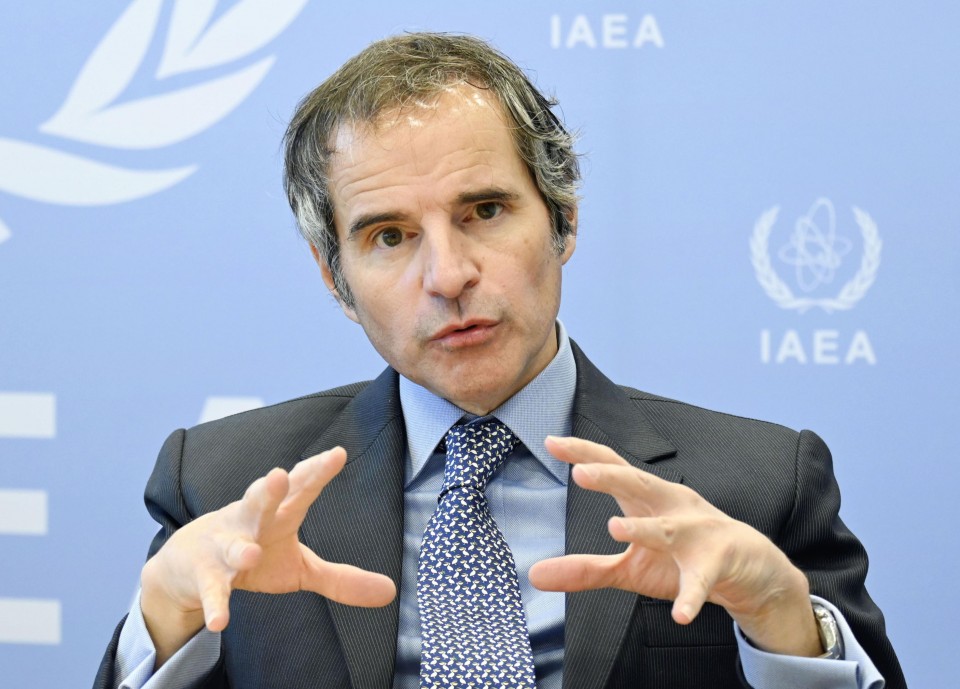 The Japanese government decided Tuesday to allow the plant operator Tokyo Electric Power Company Holdings Inc. to release into the sea more than 1 million tons of treated water that has accumulated at the complex since a massive earthquake and tsunami triggered a triple core meltdown in March 2011.

The water will be significantly diluted and released in small amounts, with the step-by-step operation set to start in about two years' time.

"The IAEA will be at the center of this activity," including offering technical support and monitoring the safe implementation of the plan, Grossi said.

He said the organization will be present "in a permanent way" by participating in the before, during and after phases of the water discharge project, which could last several years.

The director general, who visited Fukushima last year, said he will return to the northeastern prefecture before the discharge operation starts and expressed hope that his trip would help reassure people concerned.

The Fukushima project to release "a very vast" amount of stored water is a "complex task," different from controlled water discharges by operating nuclear power plants around the world based on an agreed procedure, Grossi said.

He said it will be necessary to ascertain that all the water to be discharged has been processed "to the maximum level agreed."

"The agency is going to be managing the assistance operations side by side of course with Japanese counterparts" and will seek assistance from other international experts to "enrich the quality of the whole operation," the IAEA chief said.

"Of course Japan could do this unilaterally," Gross said, citing the country's technology and expertise. "But this would create enormous credibility gaps and problems in terms of transparency, in terms of the confidence that is needed."

"By having an international, impartial body like the IAEA accompanying, joining this preparation, these measurements and the assessment of the measurements, then this ingredient of confidence and transparency is there," he said.

"I cannot imagine a better, more efficient way to provide the international community with the necessary, timely, comprehensive information of what is going on than having the IAEA involved," the director general said.

Japanese Chief Cabinet Secretary Katsunobu Kato on Thursday welcomed the IAEA's plan for a scientific investigation by experts from the agency.

"We understand the investigation team is comprised of people with expertise in the field of nuclear safety regardless of nationality," Kato said at a regular news conference in Tokyo.

Given various opinions on the matter, Kato said Japan must give explanations with transparency based on scientific grounds, and is grateful for the help of the IAEA and experts to that end.

On Tuesday, China and South Korea expressed opposition to Japan's announcement on the water release plan, with Chinese Foreign Ministry spokesman Zhao Lijian saying Beijing had urged Tokyo not to release the treated radioactive water at the Fukushima plant "without permission" from other countries and the IAEA.

At the Fukushima Daiichi plant, water pumped into the reactors to cool the melted fuel, mixed with rain and groundwater, is treated using an advanced liquid processing system, or ALPS. The process removes most radioactive material except for tritium, which is said to pose little health risk.

Over 1.25 million tons of contaminated water was stored in tanks as of March this year on the site.

Last month, Japan asked the IAEA to conduct a safety review and make public its view in the event Tokyo decides to dispose of the treated radioactive water accumulating at the Fukushima plant.