A Japanese court ruled for the first time Wednesday that the government's failure to recognize same-sex marriage is unconstitutional as it violates the right to equality, in a historic verdict hailed by activists as a step toward a change in their lives.

But the Sapporo District Court, ruling on a suit brought by three same-sex couples in Hokkaido, rejected their demand for 1 million yen ($9,100) each for psychological damage caused by what they called the government's negligence in not amending the law to allow them to marry. 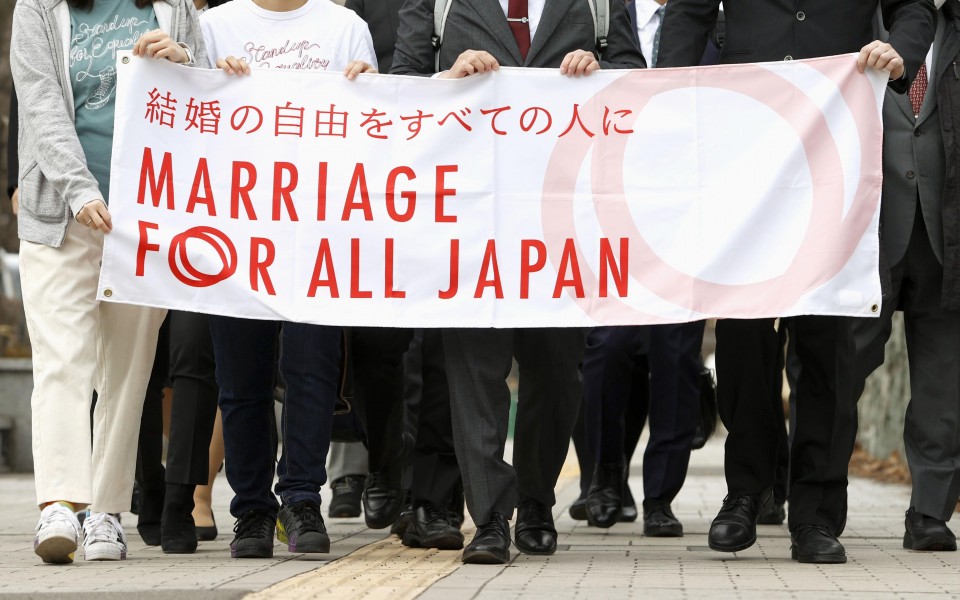 Even so, plaintiffs and supporters rejoiced at what they welcomed as a landmark ruling in Japan, the only Group of Seven country that refuses to recognize same-sex marriage.

"My tears didn't stop flowing. The court took us seriously," said a plaintiff in his 40s, who uses Ryosuke Kunimi as his pseudonym, following the verdict.

The plaintiffs were among 13 couples who filed similar lawsuits on Valentine's Day in 2019 in Sapporo, Tokyo, Osaka and Nagoya. Another three same-sex couples filed a suit in Fukuoka in September that year.

The three couples in Hokkaido -- two male couples and one female couple -- said they had tried to register their marriages with local authorities in January 2019 but were rebuffed on the grounds that same-sex marriage has no legal status.

Presiding Judge Tomoko Takebe sided with the couples who claimed the government was violating Article 14 of the Constitution that ensures the right to equality, describing as "discriminatory" the government's failure to implement legal measures to offer "even a degree" of marital benefits to same-sex couples.

In rejecting the demand for compensation, Takebe said, however, that the state reparations law had not been violated, noting the difficulty for Japan's parliament to quickly recognize the problem.

The lawsuit also revolved around the interpretation of marriage in Article 24 of the Constitution that stipulates, "Marriage shall be based only on the mutual consent of both sexes and it shall be maintained through mutual cooperation with the equal rights of husband and wife as a basis."

Takebe agreed with the government that there was no violation of Article 24 of the Constitution, saying it related to heterosexual marriage and did not mention same-sex marriage.

The plaintiffs' lawyers argued the article's intent was to preserve gender equality and individual respect, and it does not preclude marriage between people of the same sex.

The government has interpreted the article as applicable solely to heterosexual couples. It has also indicated that "husband and wife" used in civil law and family registration law refers to a man and a woman, and thus it cannot accept marriage applications from same-sex couples.

On Wednesday, the government reiterated that its interpretation of the civil law does not violate the Constitution.

"Our claims were not accepted in this ruling," its top spokesman, Chief Cabinet Secretary Katsunobu Kato, said at a press conference, adding the Justice Ministry would study the details of the decision as well as the lawsuits pending elsewhere in the country.

The trial attracted 153 people who queued outside the courtroom for a chance to witness the ruling.

Yumi Hino, a 65-year-old transgender woman who was at the hearing, said, "I came because I thought it would be a historic event. (The ruling) will be a light of hope for LGBT couples."

One of the plaintiffs said, "It's like a dream. Now the government only needs to act."

LGBT people are not granted benefits enjoyed by straight couples such as medical visitation rights and the ability to make medical decisions for their partners, co-parenting rights and spousal income tax deductions.

To make it easier for them to enjoy the same public service benefits as straight couples, 74 municipalities were issuing partnership certificates as of January, with more than 1,500 couples having signed up, according to Nijiiro Diversity, a pro-LGBT group.

But the certificates are not legally binding, leaving gay and lesbian couples, and their families vulnerable.

The city of Sapporo started to issue partnership certificates in 2017, becoming the first major Japanese city to do so.

Public sentiment appears to have shifted toward greater awareness and acceptance of sexual minorities in recent years, even as it remains difficult for LGBT people to come out in a mostly conservative society.

Masayuki Tanamura, a professor on family law at Waseda University, called the ruling "groundbreaking" and an "appropriate judgement" based on changes in societal awareness, noting some companies also offer health benefits for LGBT couples.

In a 2018 survey conducted by advertising giant Dentsu Inc., at least one in 11 people between 20 to 59 years old identified themselves as LGBT. The poll also showed 78.4 percent approved or were likely to approve of same-sex marriage. However 65.1 percent of LGBT respondents said they had not told anyone about their sexuality.

Twenty-nine countries and territories, including the Netherlands, United States, South Africa and Taiwan, recognize same-sex marriage, according to Tokyo-based campaign group Marriage for All Japan.