At least 91 civilians were killed by Myanmar security forces on Saturday in the bloodiest day since anti-coup protests began in February, local media reported, with a crackdown on demonstrations across the country intensifying as the military celebrated its annual Armed Forces Day.

Earlier in the day, the military marked its first Armed Forces Day since ousting Aung San Suu Kyi's elected government in the Feb. 1 coup, with a ceremony and a military parade in the capital Naypyitaw. 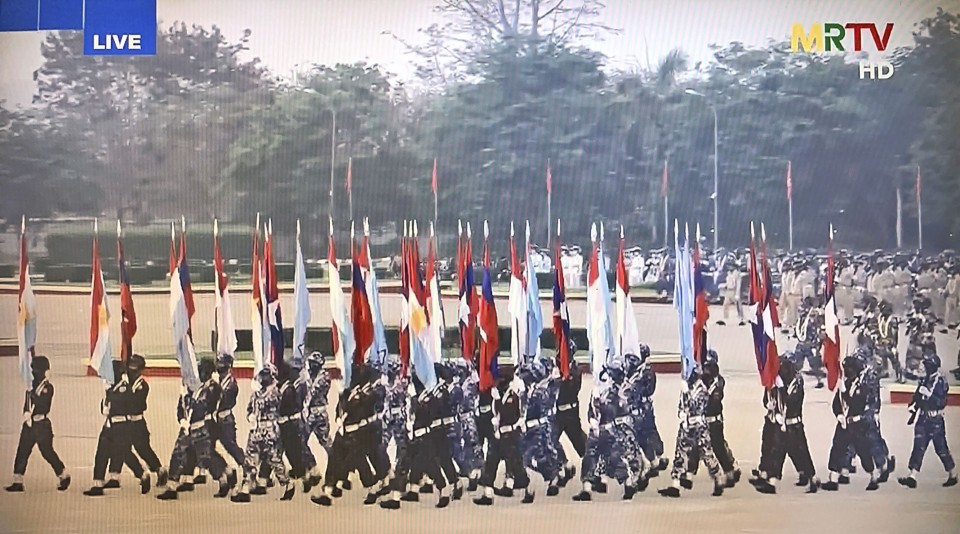 Photo taken March 27, 2021 from a program aired by Myanmar's state-run television shows soldiers take part in a military parade on Armed Forces Day in Naypyitaw (For editorial use only)(Kyodo)

Online media Myanmar Now said the 91 civilians were killed by the military in 40 towns across the country, while other local media reported the dead include children as young as 5-years-old.

The British Embassy in Yangon released a statement from Ambassador Dan Chugg condemning the brutality against civilians.

"On Myanmar's Armed Forces Day, the security forces have disgraced themselves by shooting unarmed civilians. Dozens of innocent people have reportedly been killed, including children," the statement posted to the embassy's official Twitter account read.

In preparation for the ceremony, the military has been cracking down on anti-coup protests using deadly force. The armed forces put out constant notices on state television warning that anyone attempting to interfere in the day's events was "at risk of being shot in the head."

According to the human rights group Assistance Association for Political Prisoners, 328 people have been killed as of Friday night in the military's violent campaign since the coup.

In a speech at the event, coup leader Senior Gen. Min Aung Hlaing, who inspected the military parade, strongly condemned the demonstrations while reiterating his position that the takeover was "unavoidable" due to what he termed fraud in last year's election. He did, however, vow that the military would "transfer power after a free and fair election" but gave no details.

Min Aung Hlaing also criticized the National League for Democracy, which resoundingly won last November's general election, as "trying to launch an unconstitutional government," and hinted at bribery allegations against them, including Suu Kyi.

Armed Forces Day marks the date in 1945 when Gen. Aung San, Suu Kyi's father, began the resistance to the Japanese occupying forces during World War II and is considered the most important event for the military to showcase its prowess.

About 8,000 soldiers and other personnel attended this year's parade, where weaponry was put on display. Visiting Russian Deputy Defense Minister Alexander Fomin was present at the ceremony, as Min Aung Hlaing thanked his country for being "a true friend."

In prior years, representatives from 20 to 30 countries would attend the ceremony. This year, however, officials from only eight countries attended, including Russia, Thailand and China, underscoring the troubled nation's growing isolation from the international community.

Japan was invited this year as well, but Japanese Foreign Minister Toshimitsu Motegi said earlier this month that Tokyo has no intention of sending Japanese personnel to the event.

Previous Armed Forces Day military parades were held with over 10,000 personnel from Myanmar's army, navy and air force, as well as tanks, missiles and other types of weaponry on display. The event was canceled last year due to the coronavirus pandemic.