An online tour of breweries in Kagawa Prefecture was launched this month by the Takamatsu Regional Taxation Bureau for people abroad to experience and learn more about Japanese sake from the comfort of their homes.

According to the bureau, the four prefectures in the Shikoku region exported a total of 233.4 kiloliters of sake in 2019, but only 19.0 kiloliters, or less than 10 percent, was from Kagawa. 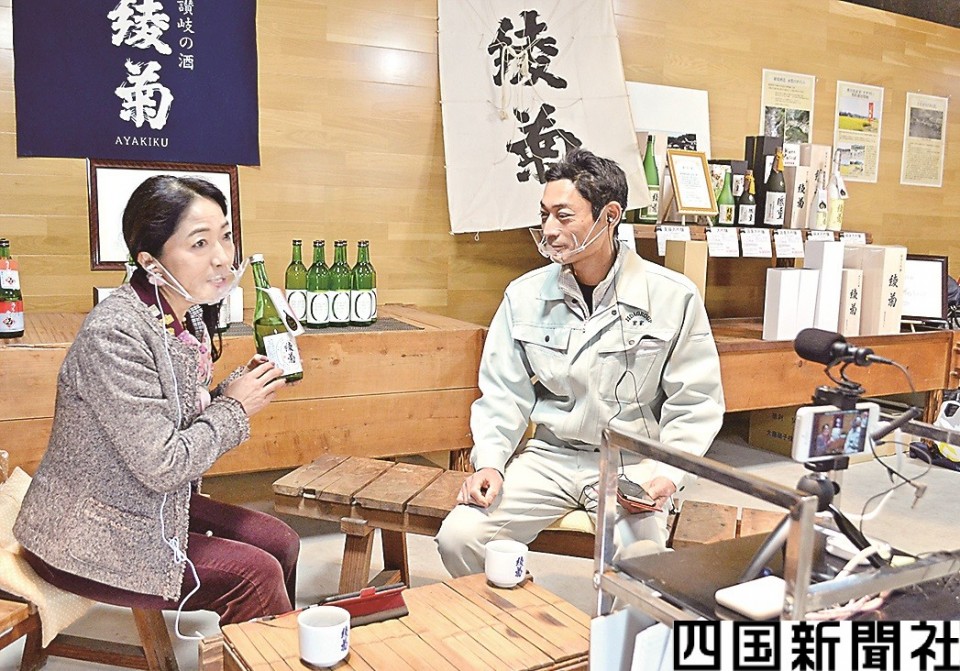 In a bid to promote sake exports by Kagawa breweries, the bureau came up with the idea of organizing a virtual tour of local sake breweries.

For the inaugural round, it recruited 21 foreign residents of the prefecture to take part in the tour and to talk about their experiences on social media afterwards.

With local sake delivered in advance, the participants enjoyed an English video introducing the sake brewing process and sightseeing spots in the prefecture. They were also able to learn more about sake and Kagawa by asking questions via a chat function using a videoconferencing app.

Six breweries, all members of the Kagawa Sake Brewery Association, were featured in the tour.

Participants on Feb. 20 enjoyed a live broadcast from Ayakiku Sake Brewing Co. in Ayagawa, along with pre-recorded footage of Shodoshima Shuzo Co. in Shodoshima and Maruo Honten in Kotohira, as well as of the Seto Inland Sea and Kotohiragu shrine, two major sightseeing spots in Kagawa.

Meanwhile, those who took part on Feb. 21 were introduced to Kawatsuru Sake Brewing Co. in Kanonji, Nishino Kinryo Corp. in Kotohira and Yushin Brewer Co. in Ayagawa.

During the live broadcast on Feb. 20, Ayakiku's chief brewer Shuichi Miyake showed the participants around the brewery. "Sake pairs well not only with Japanese meals but Western cuisine too," he said.

After the virtual tour, a delighted participant who hails from New Zealand said it was a lot of fun, while a British participant remarked that the sake was tasty and spoke of a newfound appreciation for the traditional Japanese drink.

"I am glad we had this opportunity to let people know about Japanese sake and Kagawa," said Kenji Kishimoto, president of Ayakiku. "I hope this event will help spread the word to as many people as possible."