International Olympic Committee chief Thomas Bach voiced confidence Thursday that the Tokyo Olympics will go ahead this summer, saying there is "no plan B" even as doubts grow amid a sharp resurgence of coronavirus cases in the Japanese capital and elsewhere.

"We have at this moment, no reason whatsoever to believe that the Olympic Games in Tokyo will not open on the 23rd of July in the Olympic stadium in Tokyo," Bach said in an online interview with Kyodo News two days ahead of marking six months until the rescheduled event begins. 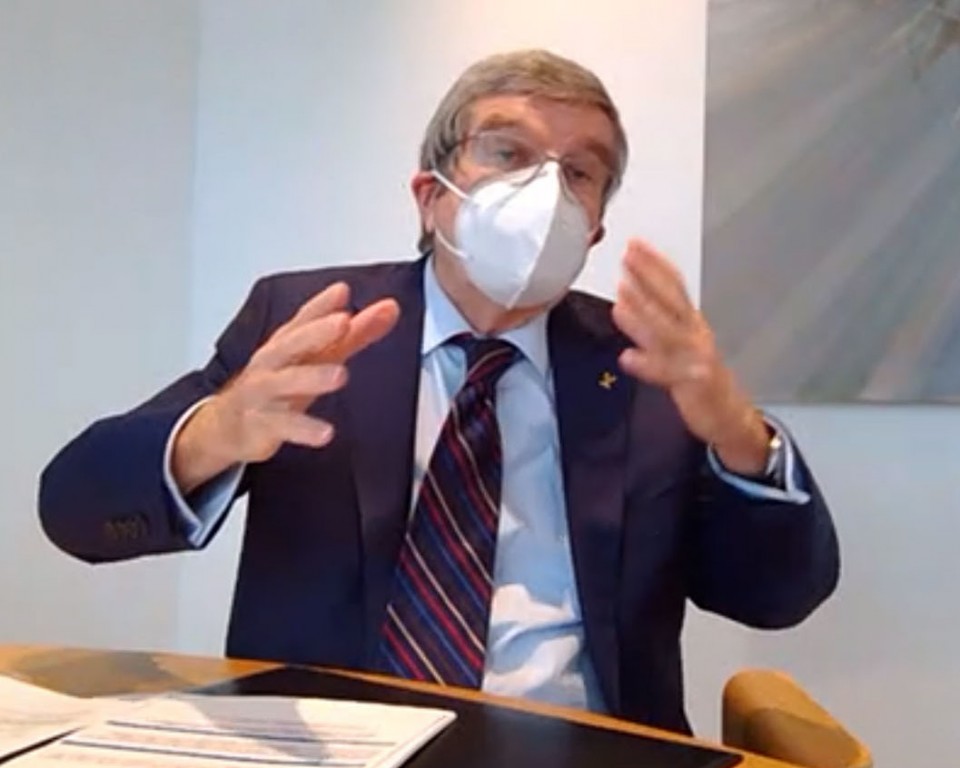 But he hinted at the possibility of reducing the number of spectators, saying the IOC has to be "flexible" to protect the lives of the people involved.

"You may not like it but sacrifices will be needed. This is why I'm saying, safety first, and no taboo in the discussion to ensure safety," the IOC president said.

Japan has been preparing to hold the Summer Games with spectators -- even exempting from quarantine fans coming from countries with infections under control. The hosts, however, have said they will make a final decision by the end of spring whether to welcome spectators.

The Olympics and Paralympics, which were originally scheduled for 2020, were pushed back in March that year after athletes expressed fears over the novel coronavirus, and a number of qualifying events had to be canceled.

While the virus continues to spread across the globe, Bach said the world is now better equipped to prevent infections, brushing aside speculation that the fate of the games may be known in the next two months or so.

"First of all, let me be clear that you cannot compare March 2021 with March 2020 because there is such great progress in science, medicine, vaccination and (virus) tests," he said. "All this was not available in March last year. Nobody knew yet how really to deal with the pandemic, and now we know much more."

Bach said he believes coronavirus vaccines will become available by April or May in many countries. The 67-year-old also said March and April are two important months in terms of deciding how the games will be staged but drawing specific measures against the virus can wait until June.

Reiterating his trust in Japan's anti-virus steps, Bach said he would be "happy" if possible to again visit the country in May, when the nationwide Olympic torch relay will go through the city of Hiroshima, which suffered the devastation of the world's first atomic bombing.

Beyond the Tokyo Games, he said the Beijing Winter Olympics will go ahead in 2022 as planned.

Japanese Prime Minister Yoshihide Suga has insisted that the international mega sporting event will be held as scheduled as "proof that humanity defeated the coronavirus."

Still, Japan and the IOC, as well as athletes, face mounting challenges ahead and many questions remain unanswered.

Japan and many other countries have been facing a surge in infections, reporting more daily cases compared with 10 months ago when the games were postponed for one year, and increasing threats of new and more potentially contagious coronavirus variants.

Tokyo has logged more than 1,000 cases of daily infections in recent days, and some other areas of the country are now under a monthlong state of emergency, during which residents are requested to stay at home as much as possible and restaurants asked to close earlier.

The virus has also cast a shadow over the games' qualification process. Only 57 percent of the Olympic spots had been secured as of March last year when the games were pushed back and many athletes still struggle to train to keep their Olympic hopes alive.

Moreover, as the Olympics approach, Japan has failed to win strong public support for the games as infection cases continue to rise.

An opinion poll by Kyodo News earlier this month found that 80 percent of respondents want a cancellation or postponement of the games. Only 14 percent supported hosting them as scheduled, less than half of the percentage in the previous survey in December.

"From a human point of view, I have some understanding," Bach said, given that countless people have been in hard times. "It is difficult to imagine what will happen in six months."

The following is the gist of remarks made by International Olympic Committee President Thomas Bach in an online interview with Kyodo News on Thursday.

-- Tokyo Olympics to go ahead this summer and there is "no plan B."

-- There is "no taboo" in efforts to protect health of people involved, suggesting number of spectators may be reduced.

-- Current situation is different from March 2020, when postponement of Summer Games was decided, as world has more know-how in dealing with coronavirus pandemic.

-- March and April to be "very much important" over what to do with spectators but many specifics can still be worked out later.

-- He is confident in Japan's ability to formulate anti-virus steps.

-- Coronavirus vaccines will contribute to safety of Olympics.

-- Low public support in Japan understandable, but that will rise as virus situation improves.

-- Beijing Winter Olympics to go ahead as planned in 2022.

-- He would be "happy" to again visit Japan in May if possible.