Japan's top government spokesman said Tuesday that the widespread distribution of coronavirus vaccines is not a prerequisite for going ahead with this summer's Tokyo Olympics and Paralympics.

"We are considering comprehensive measures to hold a safe and secure games, even without making vaccines a condition," Chief Cabinet Secretary Katsunobu Kato told a press conference.

Prime Minister Yoshihide Suga's administration has remained adamant that the Olympics and Paralympics, postponed last year due to the global COVID-19 pandemic, will be held from late July through early September, despite public skepticism as infections in the country continue to surge. 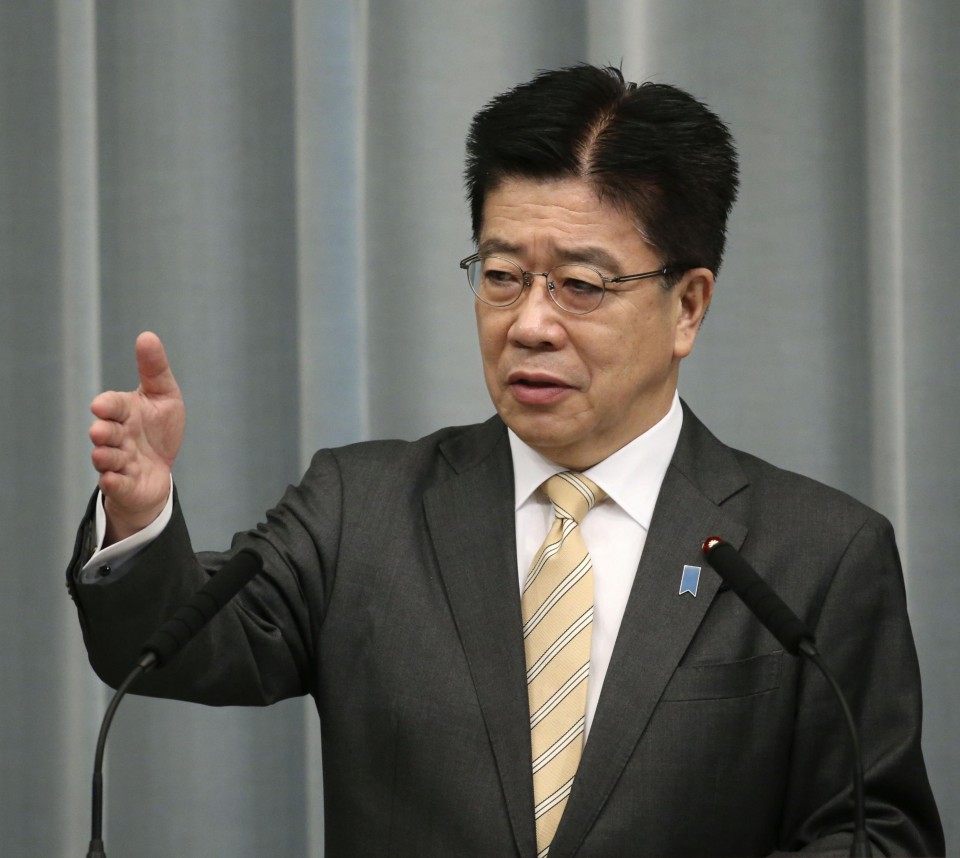 Around 80 percent of respondents in a Kyodo News survey conducted this month said the games should be rescheduled again or canceled.

In the nation's capital Tuesday, there were 155 patients with serious COVID-19 symptoms, exceeding 150 for the first time and up 12 from the previous day, according to the Tokyo metropolitan government, adding to concern about the strain on the medical system.

There were a record 1,001 serious cases nationwide, having increased by around 100 per week since the beginning of January.

Since December, at least 17 people infected with the virus are believed to have died while quarantining in hotels or at home after their symptoms suddenly worsened, according to a Kyodo News tally.

Many were elderly individuals who were asymptomatic or suffering from mild symptoms. Some of them had been in the process of scheduling hospitalization.

Over 30,000 people nationwide are currently isolating at home, while nearly 8,000 are staying in hotels.

Vaccinations are slated to begin in Japan by late February, starting with medical workers, followed by people aged 65 or older from late March, then people with pre-existing conditions and those caring for the elderly.

Suga, who turned 72 last month, falls in the second category and will be inoculated when his turn comes, said an official from the Ministry of Health, Labor and Welfare.

The general population is expected to become eligible for vaccination from around May, according to government sources.

Administrative reform minister Taro Kono, who was appointed to lead the vaccination efforts, promised the swift distribution of doses across the country.

"I will do everything in my power to ensure safe and effective vaccines can be given to as many people as possible, as quickly as possible," he said at a press conference on Tuesday.

Health minister Norihisa Tamura said for vaccinations to move forward according to the government's timeline, approval would need to come in mid-February.

"We are making plans with that in mind," he said at a separate press conference the same day.

The distribution of the vaccines poses various logistical challenges, including the need to store some types at subzero temperatures.

Kono said his job would be clearing those hurdles, but the government's coronavirus response would continue under the purview of Tamura and economic and fiscal policy minister Yasutoshi Nishimura.

Suga has vowed to secure vaccines for Japan's population of 126 million by the first half of 2021, with the government having agreements with Pfizer Inc., AstraZeneca Plc and Moderna Inc. to receive enough doses for 145 million people.

The Pfizer vaccine, the only one already under review by the health ministry, is expected to receive fast-track approval based on clinical trials conducted in other countries.

Meanwhile, Okinawa said Tuesday it will request the central government to add the southernmost island prefecture to the coronavirus state of emergency that took effect for some prefectures earlier this month, Okinawa Gov. Denny Tamaki said during a press conference.

The prefecture, which logged 113 infections the same day, declared its own emergency, taking effect from Wednesday through Feb. 7.

Suga declared a monthlong state of emergency on Jan. 7 for Tokyo and three neighboring prefectures, later expanding it to another seven of Japan's 47 prefectures.

Under the state of emergency, people are urged to refrain from going outside unnecessarily and restaurants are asked to shorten their opening hours.