Japan's expanded state of emergency over the novel coronavirus pandemic is expected to dent consumer spending by more than 2 trillion yen ($19.3 billion) as the declaration could lift unemployment and cut sales at eateries and retailers, economists said.

Takahide Kiuchi, executive economist at the Nomura Research Institute, estimates that consumption will be reduced by 2.3 trillion yen, as Prime Minister Yoshihide Suga said Wednesday the state of emergency declared for Tokyo and three neighboring prefectures last week was being extended to another seven prefectures. 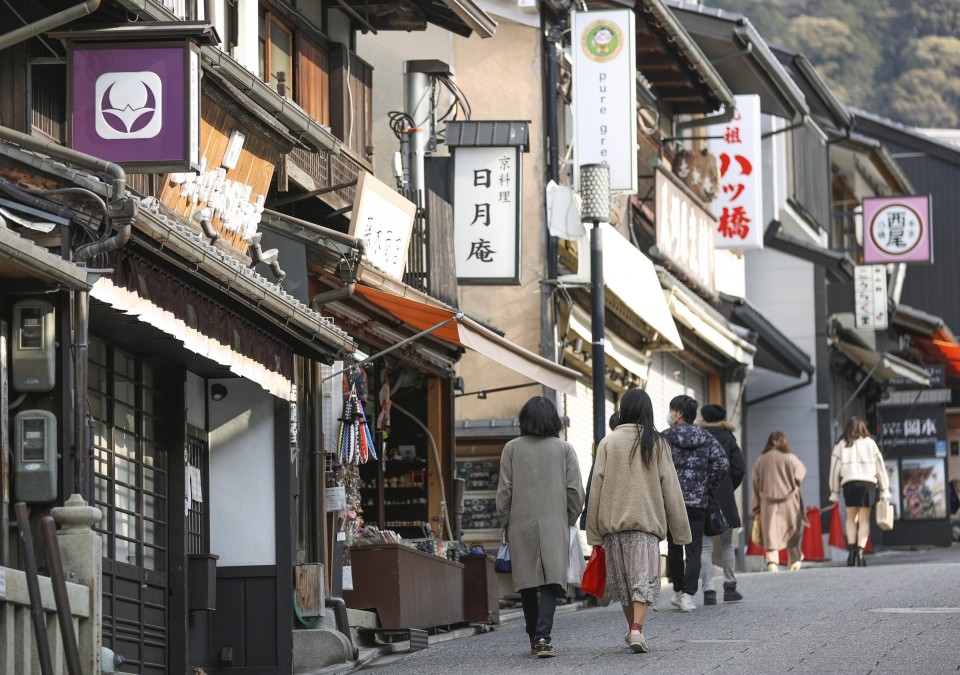 Fewer people than in a normal year walk in Kyoto, western Japan, on Jan. 13, 2021, amid the coronavirus pandemic. (Kyodo)

The loss corresponds to 0.40 percent of Japan's annual gross domestic product in nominal terms, with residents' income in the capital and the other 10 prefectures including Osaka, Aichi and Fukuoka accounting for 60.6 percent of the country's economy, Kiuchi said.

In the 11 prefectures, residents are asked to stay at home, restaurants are requested to close by 8 p.m. and firms are encouraged to have employees work from home or stagger their shifts until Feb. 7. Under the second state of emergency, declared nine months after the first, some service providers such as department stores and some entertainment facilities are also likely to cut their operating hours.

The expanded emergency "will increase the number of unemployed people by 373,000, and raise the jobless rate by 0.55 percentage point," Kiuchi said.

Toshihiro Nagahama, chief economist at the Dai-ichi Life Research Institute, said the Japanese economy will shrink by 2.5 trillion yen, or 0.4 percent of its annual GDP, and up to 131,000 people will lose their jobs with the unemployment rate rising by 0.2 percentage point, due in part to the expanded emergency declaration.

Nagahama said in a report his estimate also reflects the impact of the suspension since Dec. 28 of the "Go To Travel" campaign, a government-subsidized program intended to boost the virus-hit domestic tourism sector.

According to the average forecast of 36 economists polled from Dec. 25 to Thursday by the Japan Center for Economic Research, Japan's economy was projected to contract an annualized 0.99 percent in the January-March period.

As the country has faced a third wave of coronavirus infections since November, Suga said on Jan. 4 that the government was considering declaring a second state of emergency, without specifying a start date, duration or the areas covered.