A monthlong state of emergency planned by the Japanese government to contain a resurgence of novel coronavirus infections is expected to knock trillions of yen off private consumption, with some economists predicting the economy will return to contraction.

Expected economic impacts of a state of emergency in Tokyo and three neighboring prefectures, which the government of Prime Minister Yoshihide Suga is considering declaring on Thursday, will likely be smaller than those seen after the first emergency declaration in April last year in Tokyo and six prefectures. 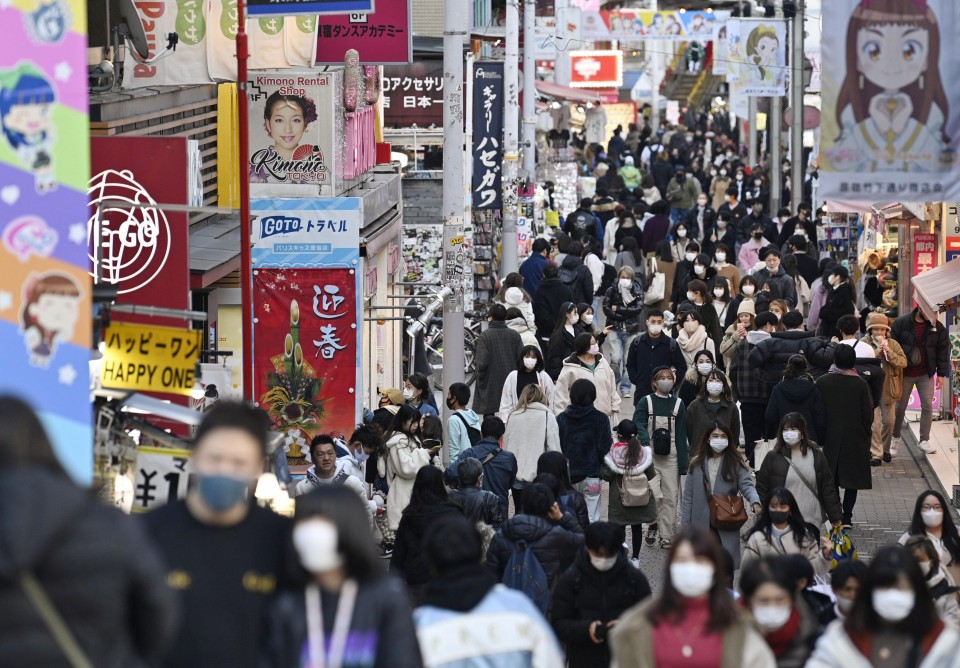 People wearing face masks walk on a street in Tokyo's Harajuku area on Jan. 4, 2021, amid the coronavirus pandemic. (Kyodo) ==Kyodo

The declaration then was later expanded to the entire nation and fully lifted in late May. Expected restrictions this time, though not legally binding and limited to the Tokyo area, could still wipe out a significant part, if not all, of growth previously expected in the January to March quarter, economists said.

An economic slowdown in the capital could have a ripple effect, and there is even a possibility that the planned state of emergency will be expanded, they said.

Tokyo reported more than 1,200 new coronavirus infections Tuesday, with a record-high 111 COVID-19 patients in serious condition. It was the second-highest figure for the capital, after 1,337 cases reported on Dec. 31.

"The situation has been getting worse, and if the areas and the period of the declaration are extended, the percentage of the GDP shrinkage in the current quarter could be a double-digit one," said Shinichiro Kobayashi, a senior economist at Mitsubishi UFJ Research and Consulting Co.

"In that case, the repercussions would materialize not only in the form of consumption falls but corporate bankruptcies and increased unemployment," Kobayashi said. "That means Japan's economy could fall into a vicious cycle of deterioration in employment and income levels."

Kobayashi had last month predicted an annualized real 0.5 percent contraction in Japan's economy in the first quarter of 2021 due to the virus resurgence.

With the first state of emergency prompting people to refrain from nonessential outings and a range of businesses to cut operating hours, Japan's gross domestic product contracted an annualized real 29.2 percent in the April to June period from the previous quarter.

As economic activities restarted gradually after the emergency was fully lifted, the economy showed a sharp rebound in the following quarter, growing an annualized 22.9 percent.

According to the average forecast of 35 economists polled in December by the Japan Center for Economic Research, the economy was projected to grow an annualized 1.31 percent in the January-March term following 3.44 percent growth in the quarter to December.

Takahide Kiuchi, executive economist at the Nomura Research Institute, said about 4.89 trillion yen ($47.5 billion) of domestic consumption is estimated to disappear due to the state of emergency declaration for the Tokyo area, pushing down the nation's annual GDP by 0.88 percentage point.

The estimate is based on an assumption that 55.8 percent of the country's private consumption is not of an essential or urgent nature as shown by the government's household spending data, Kiuchi said.

Although private spending projected to be lost would be smaller than the estimated loss of 10.7 trillion yen last April and 11.2 trillion yen the following month, Kiuchi said the planned state of emergency could be expanded to nationwide in stages, knocking 14.0 trillion yen off consumption per month, or pushing down the annual GDP by 2.53 percentage points.

"Even if the target area is limited only to Tokyo and its vicinity, economic activities in different areas interact and almost all other regions in Japan will be affected," Kumano said.