One afternoon at an elementary school on the outskirts of Cairo, first-grade Egyptian students were busy wiping their desks clean and sweeping the floor with brooms under the supervision of teaching staff.

The scene, observed recently by a Japan International Cooperation Agency official, represents one of the class activities in a curriculum based on the Japanese education method that emphasizes moral training and social harmony, in addition to acquiring academic skills. 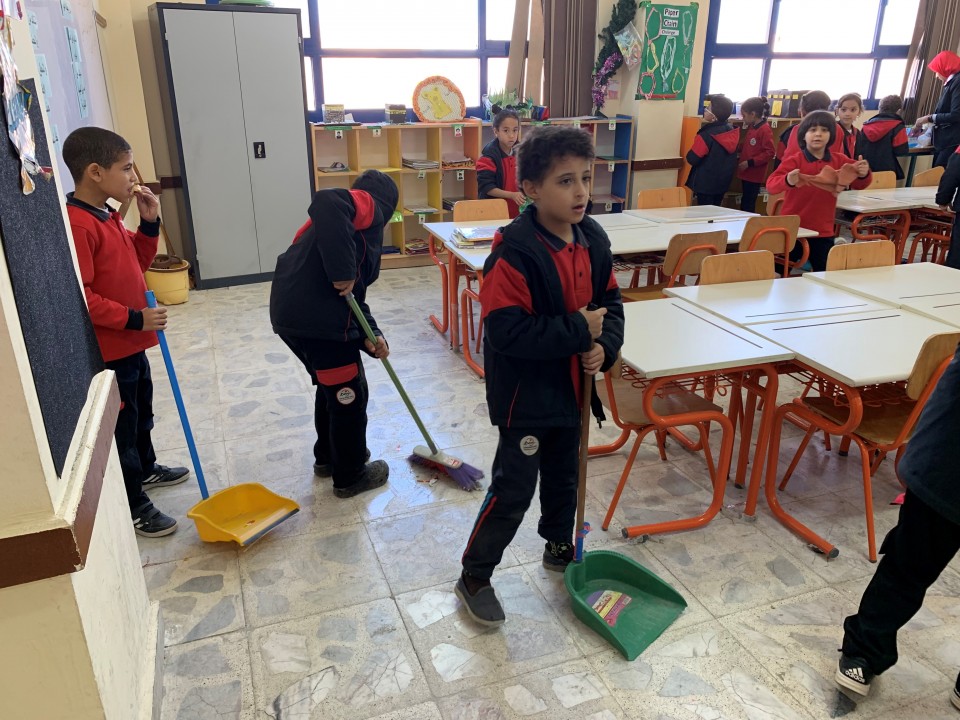 Pupils clean the floor of their classroom at a Japanese-style elementary school in the outskirts of Cairo in December 2019. (Photo courtesy of Japan International Cooperation Agency)(Kyodo)

At more than 40 Japanese-style schools launched in Egypt since 2018 in partnership with the Japanese government, children tidy up their classrooms and common areas, take turns helping the class for the day and have designated times to reflect on how they spend their day, in what experts call a "holistic" approach to schooling.

The project came after President Abdel Fattah el-Sisi visited a Tokyo elementary school during a trip to Japan in 2016.

In a country where cleaning is regarded as a vocation for low-paid workers, tasking students with tidying up school facilities initially raised the eyebrows of some parents.

But the Japanese-style education is fast winning recognition as Egyptian students started showing a sense of responsibility and cooperation outside of the school setting, such as offering to help out at home, said Mizuki Matsuzaki, who until recently served as deputy chief of JICA's Egypt office.

With JICA extending 18.6 billion yen ($180 million) in low-interest loans and dispatching teaching professionals to the Middle East country, the Egyptian government is considering increasing the number of such schools to about 100.

Besides Egypt, over 20 countries have adopted the Japanese method amid growing enthusiasm among developing countries in Asia, Africa, the Middle East and Latin America about incorporating the education methods that have supported Japan's economic and technological advances.

Seeing this as an opportunity to increase Tokyo's soft power, the Japanese government has set aside around 70 million yen a year to boost exports of education services since 2016 in an initiative dubbed "Edu-port Nippon."

Egypt's case is an example of over 60 programs launched around the world under the initiative, which fosters not only the export of the educational methods but also supplies teaching materials such as textbooks and software, according to the Ministry of Education, Culture, Sports, Science and Technology.

It helps publishers and other education-related companies establish businesses in young markets overseas when Japan's aging population is casting doubt over their sales at home, the ministry said.

Children who learn virtues or skills in a Japanese influenced environment will be indispensable resources in the workforce when Japanese companies set out to do business or make production facilities there, said Yoshiko Matsunaga, deputy director at the ministry's Office for International Strategy Planning.

"It will benefit both sides in a win-win situation," Matsunaga said. 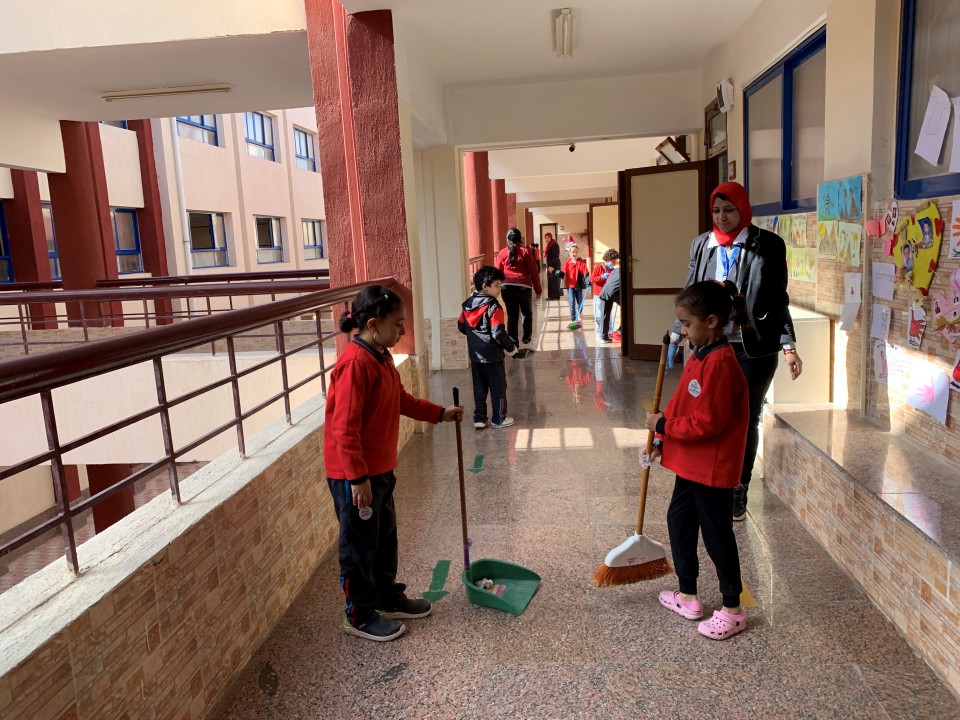 Pupils sweep the corridor with brooms at a Japanese-style elementary school in the outskirts of Cairo in December 2019. (Photo courtesy of Japan International Cooperation Agency)(Kyodo)

Assistance to music education in Vietnam represents yet another example of Edu-port Nippon.

Hiroshi Tamezawa, a project leader in charge of the promotion of in-school music education abroad at Yamaha, said the Vietnamese government expects children to develop responsibility and cooperation through the process of practicing music in class.

Instruments included in the syllabus are the vertical flute and melodica -- two instruments commonly used in classes in elementary schools across Japan, where playing them in unison is an integral part of school life for children.

Yamaha said it will broaden such activities to other parts of the world and has already tapped into six other countries -- Indonesia, Malaysia, India, the United Arab Emirates, Brazil and Egypt.

"I hope our efforts will help enrich children's learning experience, and they find ways to live in harmony," Tamezawa said, citing his desire to make the joy of playing instruments available to children around the world.