Japan's vending machines are known for their ubiquity -- scattered throughout the country on city blocks, in train stations, as well as near-desolate areas in the countryside.

Most sell beverages, but eggs, apples, hamburgers, and even fish stock are available, too. In a pinch, you can also get shirts, underwear, ties, and now, surgical masks. What else could one want? 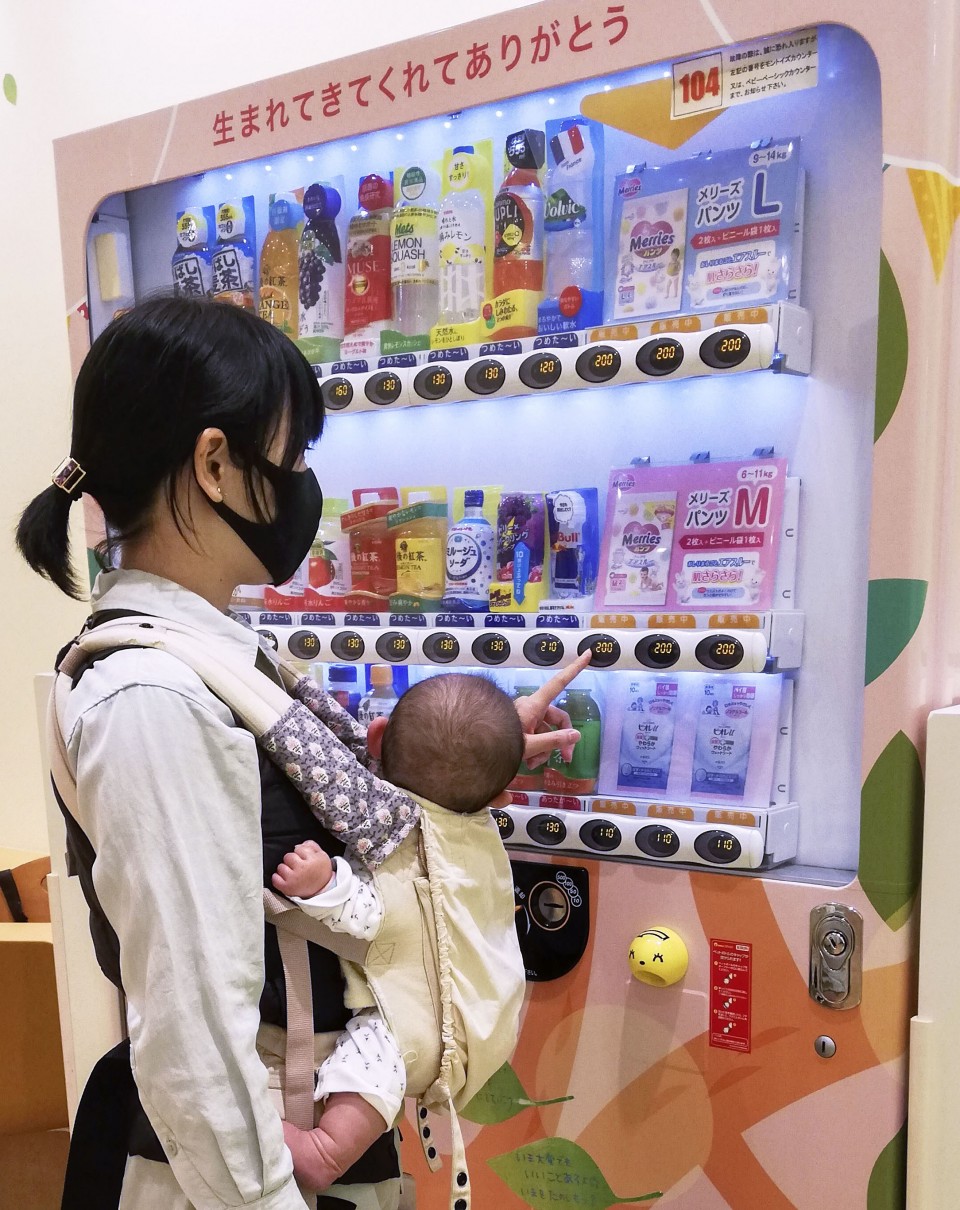 A woman purchases disposable diapers from a vending machine in Yokohama on Jan. 3, 2021. (Photo courtesy of Comachiplus)(Kyodo)

The answer, in a country concerned with its shrinking population and keen to encourage more births, appears to be babies' diapers and formula, now beginning to show up in machines in a number of locations nationwide.

In Hokkaido, central and local government bodies have gotten involved in pushing vending machine sales of such items, targeting rest stops on highways.

At Hana-road Eniwa, for instance, a roadside station located along a national highway in Eniwa, where there is a 24-hour "baby corner," a vending machine dispenses disposable diapers, baby wet wipes, and canned liquid formula that can easily be transferred to a baby's bottle.

The Hokkaido Regional Development Bureau, local municipalities, and Hokkaido Coca-Cola Bottling Co. joined hands on the initiative in 2019. So far, such vending machines are available at 11 roadside stations on Japan's northernmost island.

"When we thought about what could be done to help people, we came up with the idea of supporting child-rearing with vending machines with Hokkaido Coca-Cola, with which we had formed a tie-up in the event of disasters," said a person in charge at the regional development bureau, an arm of the Ministry of Land, Infrastructure, Transport and Tourism.

The Tokyo metropolitan region, Shizuoka in central Japan, and Fukuoka on the southwestern island of Kyushu are some of the other spots where such vending machines have appeared.

DyDo Drinco Inc., along with Secom Medical System Co., and Daio Paper Corp., began installing disposable diaper vending machines in October 2019. Paper diapers and wet wipes are sold for 240 yen ($2.30) each. Starting with a roadside station in Itako, Ibaraki Prefecture, there are now around 100 units from Tohoku, northeastern Japan, to Kyushu in the south, the companies said.

Diaper vending machines are installed by each business operator, and there are no data available that summarize the exact locations or number of units nationwide.

The seed for the idea of buying diapers from a machine as easily as a can of coffee took a while to germinate. 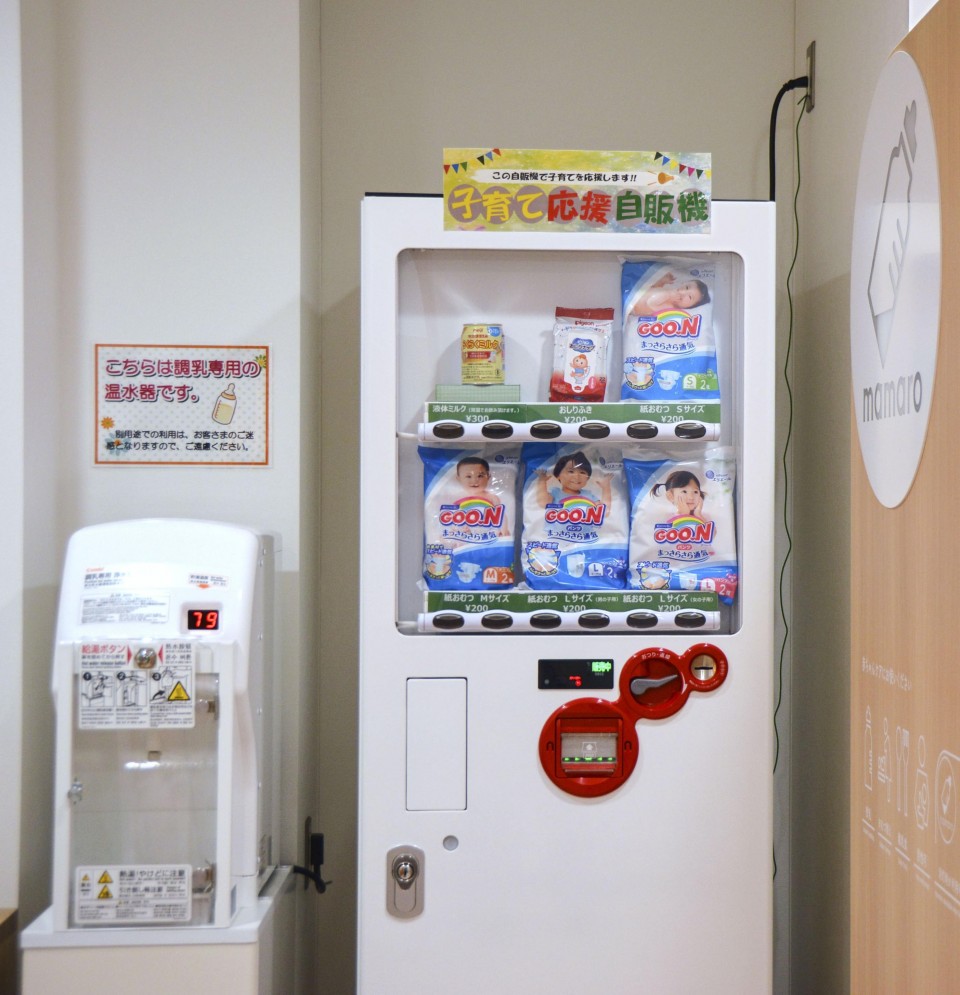 Photo taken on Nov. 23, 2020, shows a vending machine that sells baby diapers and formula at the Hana-road Eniwa roadside station in Eniwa, Hokkaido. On the left is a water heater for preparing formula. (Kyodo)

At a workshop held in 2016 by Comachiplus, a nonprofit corporation in Yokohama that supports child care, a father talked about how helpful it would be to have vending machines dispense diapers. He lamented the trouble of having to pack a bag full of items, especially bulky diapers, whenever going out of the house.

After hearing these remarks at the workshop, officials concerned at Tokyo Kirin Beverage Service Co. and Kao Corp. spent one year through trial and error developing the first vending machine in Japan to sell disposable diapers.

Those vending machines have medium- and large-sized diapers with plastic bags and wet wipes. They also sell drinks alongside, with mothers asked in a questionnaire their preferences -- a majority went for beverages with no caffeine and juices.

A portion of sales from the two firms' diaper vending machines will be donated to the "Welcome Baby Project" they launched together with Comachiplus in hopes of encouraging more childbirths.

"When babies are born, mothers usually become confined to the home. If there are vending machines (that support baby care), they feel at ease about going out. We want to create a society where people don't feel isolated," said the project coordinator Yoshimi Sato, 44.