As China likely became the only major country to achieve positive economic growth in 2020 amid the novel coronavirus pandemic, fears are mounting that Japan will lag further behind the world's second-largest economy in digital technology.

Some foreign affairs experts have adopted an optimistic view on China's rise in the digital field, saying it would provide commercial opportunities for Japanese companies, many of which have been bolstering their business relations with Chinese firms.

Others, however, have warned that unless Japan makes serious efforts to promote its own digital competency as a national strategy, the world's third-biggest economy could be swallowed up by China's more influential platform in the not-so-distant future. 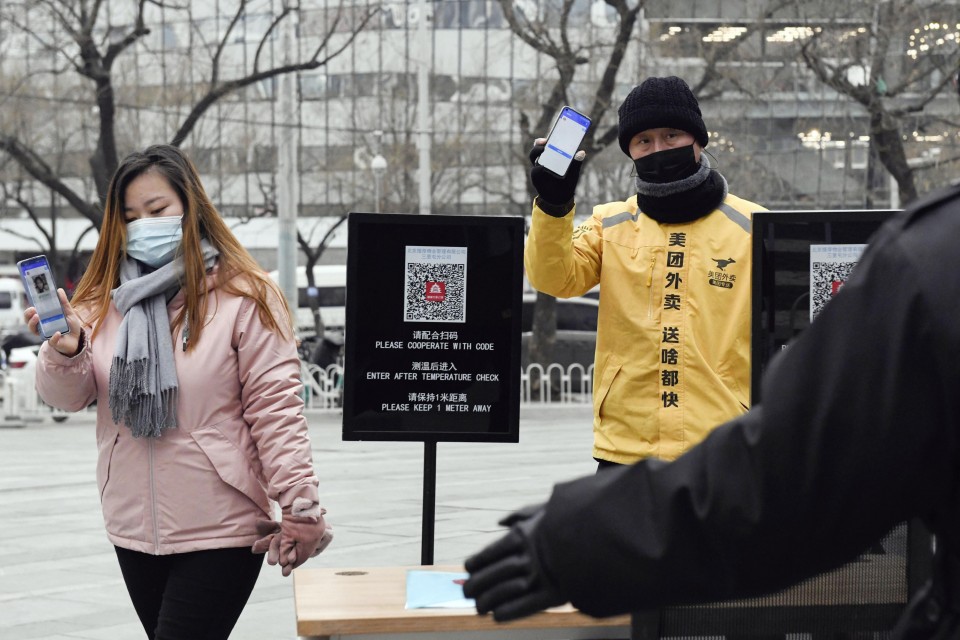 People showing smartphones are pictured on Jan. 14, 2021, as a sign at the entrance of a shopping street in Beijing seeks an electronic certificate of health.

Although Japanese Prime Minister Yoshihide Suga has pledged to make digitalization a top policy priority since he took office in September, he has yet to yield visible results as he has been compelled to concentrate on taking steps to contain the virus crisis.

China's economy is expected to "gain momentum in 2021 with domestic demand bouncing back from the coronavirus shock," probably allowing the Communist-led nation to spend "huge money" for developing digital technology, a diplomatic source in Beijing said.

In contrast, Japan's economy "may not recover sharply," as the virus has rapidly spread in the past few months at home, forcing Suga's government to issue a state of emergency for several regions to restrict economic activities on a mass scale there, he said.

The increase in new infections peaked in China in late February 2020 on the back of the country's hardline "zero corona" policy approach, but Japan's request-based "with corona" policy has apparently failed to curb the virus outbreak so far.

While Japan might struggle to prop up its virus-hit economy this year, China is set to try to strengthen its digital infrastructure and capitalize on it as one of the drivers to expand its exports, a key engine of economic growth, the source said.

"Even now, Japan cannot hold a candle to China in terms of digital technology. If Japan cannot catch up, the course of its digital transformation could be dominated by China," he added.

China registered 2.3 percent year-on-year economic growth in 2020, government data showed Monday, as the International Monetary Fund has projected Japan, the United States and the eurozone would have experienced a contraction last year.

During the October-December period, China's gross domestic product grew 6.5 percent from the previous year, posting the third straight quarter of expansion, after shrinking 6.8 percent in the first three months of 2020.

With the broader economy recuperating, China has reportedly planned to invest 10 trillion yuan ($1.54 trillion) for five years through 2025 in development of digital-related technologies such as artificial intelligence, 5G network and quantum computers.

As the pandemic has highlighted the importance of "non-contact" activities including telemedicine and online education, China may also accelerate provision of its digital services to other nations, said Yoshino Tamai, a senior economist at the Mizuho Research Institute.

In early 2020, the Chinese government introduced a health code system that can confirm whether a person has a high risk of infection. The leadership of President Xi Jinping has been attempting to pitch the technology to the world.

The system assigns residents multicolor QR codes to register where they went and whether they had contact with infected patients. With a green light shown on their smartphones, they are permitted onto trains and expressways, and into shops and office buildings.

Moreover, China's central bank, the People's Bank of China, has already begun the trials of its digital currency in specific areas since mid-2020, paving the way for its becoming the first country to establish a national electronic payment system.

Central banks in Japan, the United States and Europe have been vigilant of China's lead in issuing a digital currency, as it could threaten the long-standing position of the U.S. dollar as an international reserve currency, analysts say.

Japan, meanwhile, has been clearly been one lap behind China in the digital field.

For example, when cash handouts, aimed at cushioning the virus impact, started to be offered in May last year, online applications were launched. But the inconvenience of the proceedings prompted many local governments to only accept mail-in applications.

Until recently, hospitals in some prefectures are believed to have reported new coronavirus cases to municipal authorities by fax after completing paperwork by hand.

In 2020, Japan ranked 27th in digital technology competitiveness among 63 economies, while China placed 16th in the global ranking released by the International Institute for Management Development, a business education school in Switzerland.

"Only China can bring the virus under control and maintain a high economic growth rate in 2021," Yukio Noguchi, an adviser to Waseda University Institute for Business and Finance in Tokyo, said in a twitter post.

China's advance in state-of-the art technologies "might continue," Noguchi said, adding democratic nations would have to challenge it down the road.