Prime Minister Yoshihide Suga apologized Wednesday after facing mounting criticism for participating in two year-end dinner parties despite the government's warnings to the public to refrain from dining in large groups to prevent spreading the coronavirus. 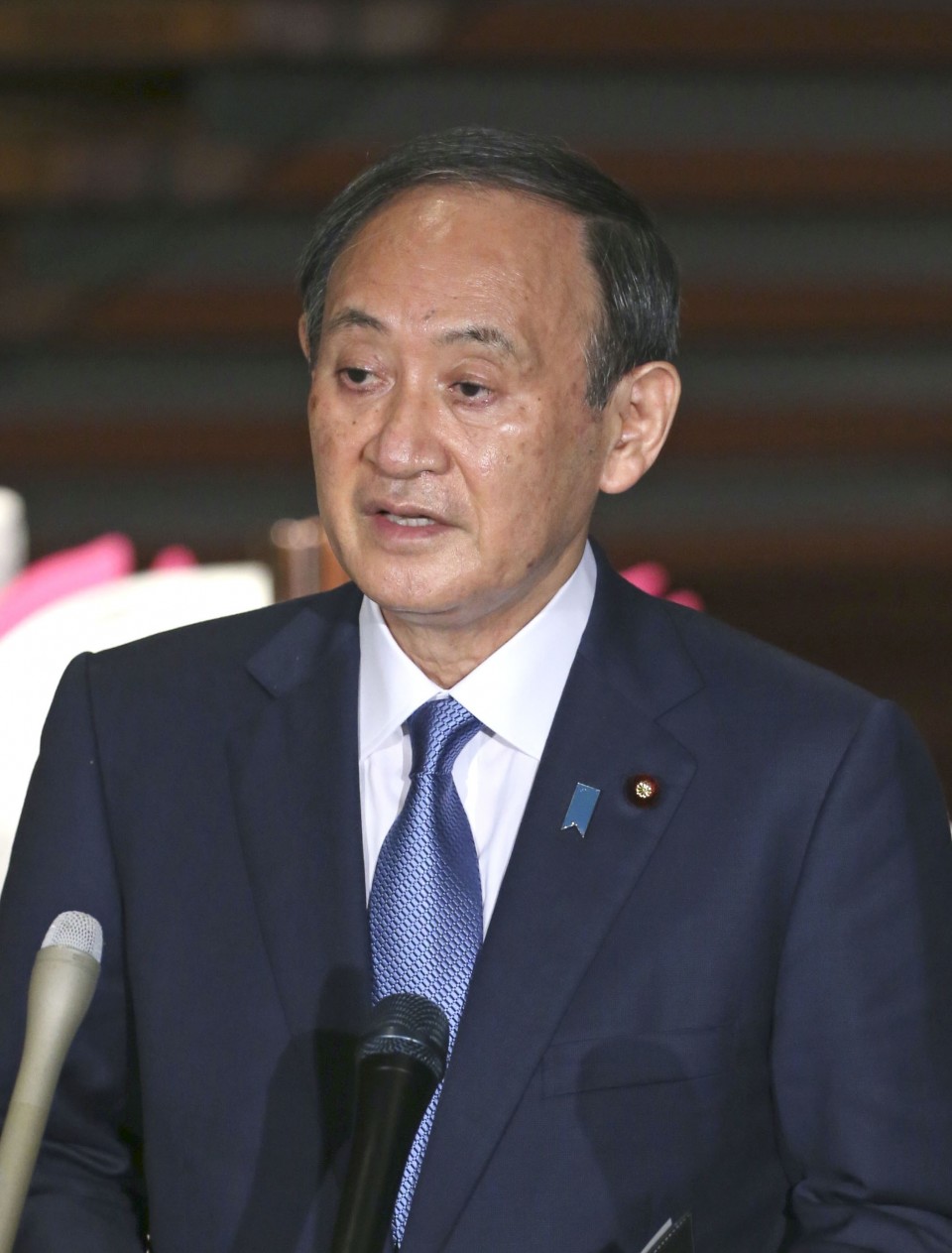 Prime Minister Yoshihide Suga speaks to reporters at his office in Tokyo on Dec. 16, 2020.

Suga attended two gatherings on Monday night, the first at a luxury hotel with about 15 people including a number of business executives and the second at an upscale steakhouse with senior members of his ruling Liberal Democratic Party and others including Sadaharu Oh, chairman of the Fukuoka SoftBank Hawks baseball team, and actor Ryotaro Sugi.

Speaking to reporters at his office, the prime minister said that while he and the other attendees had "sufficient distance" between them to prevent spreading the coronavirus, he "sincerely regrets" doing something that would "invite misunderstanding" among the public.

The government has warned the public that dining in large groups, for example with five or more people, carries a high risk of spreading the virus.

But Yasutoshi Nishimura, the minister in charge of Japan's response to the pandemic, said the five-person limit is not a hard and fast rule and cannot be enforced.

The government's top spokesman, Chief Cabinet Secretary Katsunobu Kato, said that it was important for the prime minister to meet people to "hear a wide range of views," and that the dinner parties were held with proper precautions against spreading the virus.

Suga's apology came after lawmakers from opposition parties as well as the LDP's junior coalition partner Komeito ramped up their criticism of his attendance at the gatherings, which took place on the same day the government announced a nationwide suspension of its travel subsidy program amid a surge in coronavirus cases.

"They're eating expensive steak and having a blast while telling the public to exercise self-restraint," said Jun Azumi, Diet affairs chief of the Constitutional Democratic Party of Japan.

"The prime minister's schedule serves as a message to the public. I'd hope they give sufficient consideration of this," said Komeito leader Natsuo Yamaguchi.

Suga's administration has seen support ratings plummet amid growing dissatisfaction with its response to the pandemic. 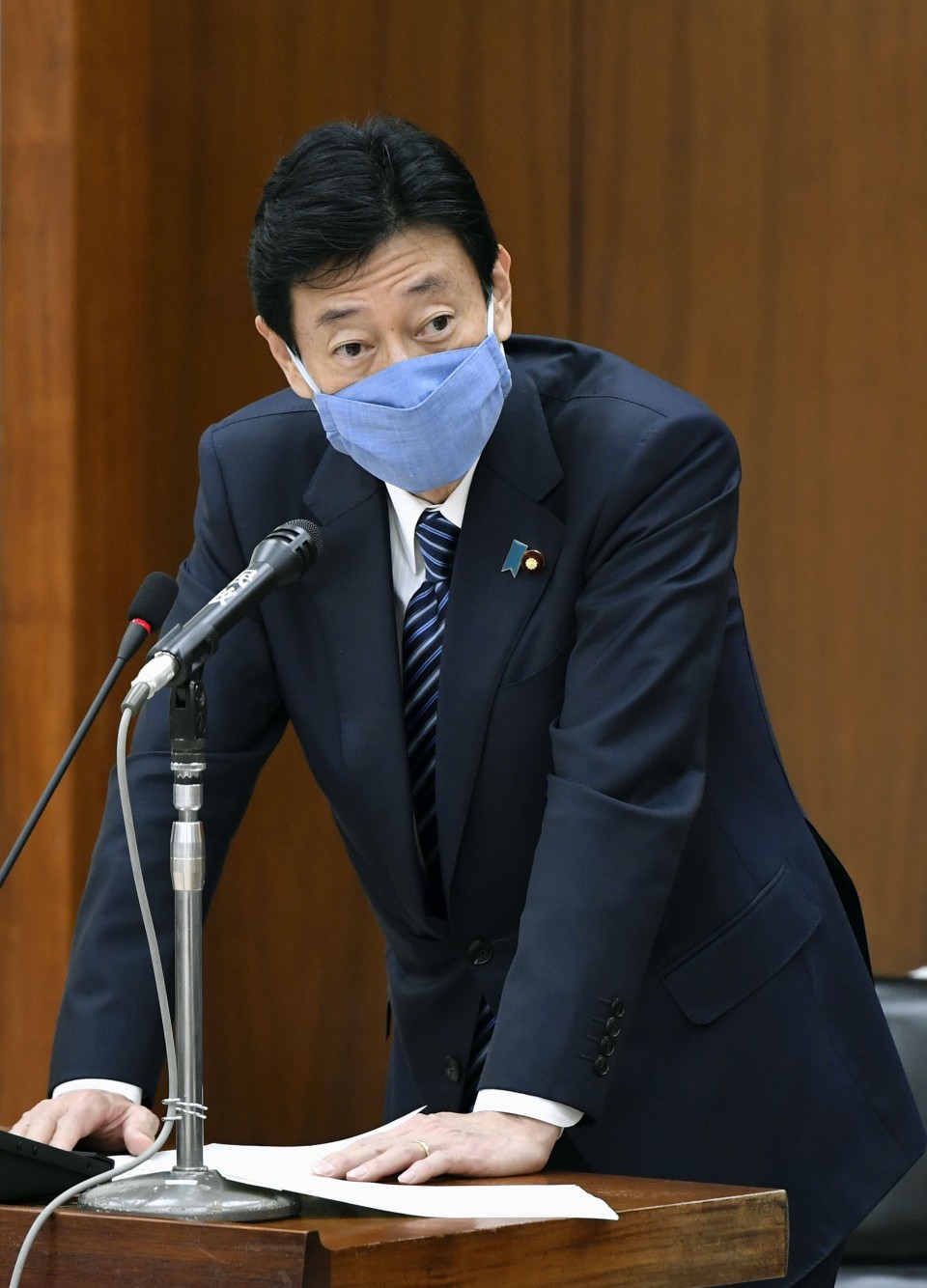 Speaking in an out-of-session committee meeting of the House of Representatives, Nishimura defended the decision to suspend the "Go To Travel" campaign over the New Year holidays, deflecting criticism that the move came too late.

Nishimura said halting the travel subsidy program, Suga's signature effort to promote domestic tourism and prop up the economy, from Dec. 28 to Jan. 11 was a "painful decision" but one that represented the "best timing" to reduce face-to-face interactions that could spread the virus.

"We will do everything we can to stop the spread of infections at an early stage," the economic and fiscal policy minister said.

Health experts had been urging the suspension of the travel subsidy program in parts of the country that were continuing to see a rise in coronavirus cases.

The government stopped the program for Osaka and Sapporo in late November, but Suga waited until Monday to suspend it nationwide after the country logged a record of over 3,000 daily new infections.

In the committee meeting, CDPJ lawmaker Masato Imai said the start date for suspending the travel subsidy program should be brought forward. "We have to stop infections now. Dec. 28 is too late."

Pushed on the need for legislation to provide compensation to businesses that are asked to temporarily close, Nishimura said there were ongoing discussions on "how to improve the effectiveness" of the legal framework for tackling the coronavirus.

"We will speed up (the process of) considering the matter," he said.