The Japanese government will suspend its subsidy program for promoting domestic tourism nationwide during the New Year holidays amid a surge in coronavirus cases, Prime Minister Yoshihide Suga said Monday, upending efforts to spur an economic recovery despite the pandemic.

The "Go To Travel" campaign will be halted from Dec. 28 to Jan. 11, and whether to restart the program will be decided at that point based on the latest situation, Suga told a meeting of the government's task force on the coronavirus response.

The abrupt announcement came after the daily number of new infections in Japan topped 3,000 for the first time on Saturday, in what some medical experts describe as a "third wave," and as the support rate for Suga's Cabinet dropped in recent media polls. 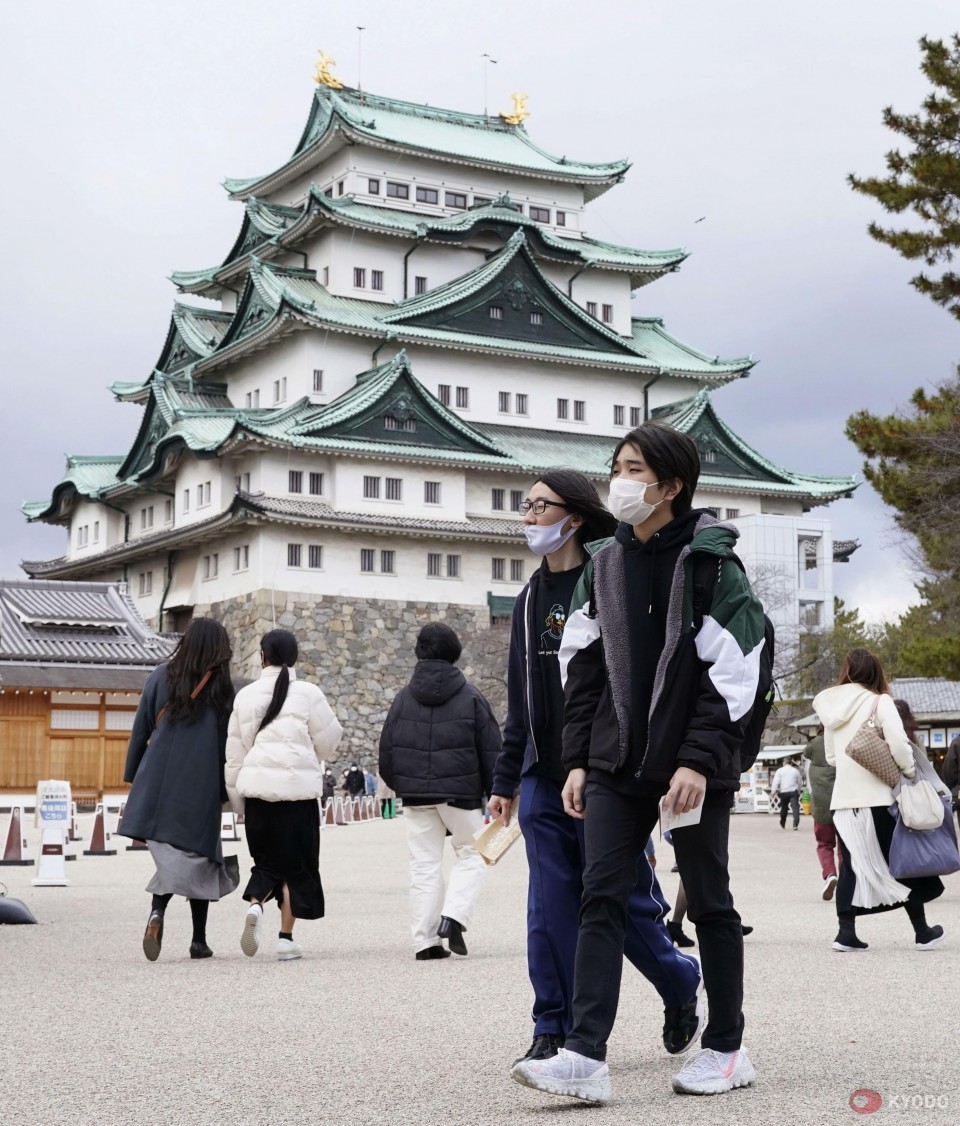 Travel subsidies for trips to Tokyo and Nagoya, both of which have seen a sharp rise in infections in recent weeks, will be suspended before Dec. 28, with residents also being asked to refrain from using the program for trips departing from either city.

Aichi Gov. Hideaki Omura told a press conference that the move will take effect for Nagoya, the capital of his prefecture in central Japan, from Wednesday.

The government will cover any cancellation fees and compensate hotels for some of their lost business, according to an official at the Ministry of Land, Infrastructure, Transport and Tourism.

"The nationwide number of infections continues to be high, and based on a number of indicators we are seeing more regions with infections spreading," Suga warned. 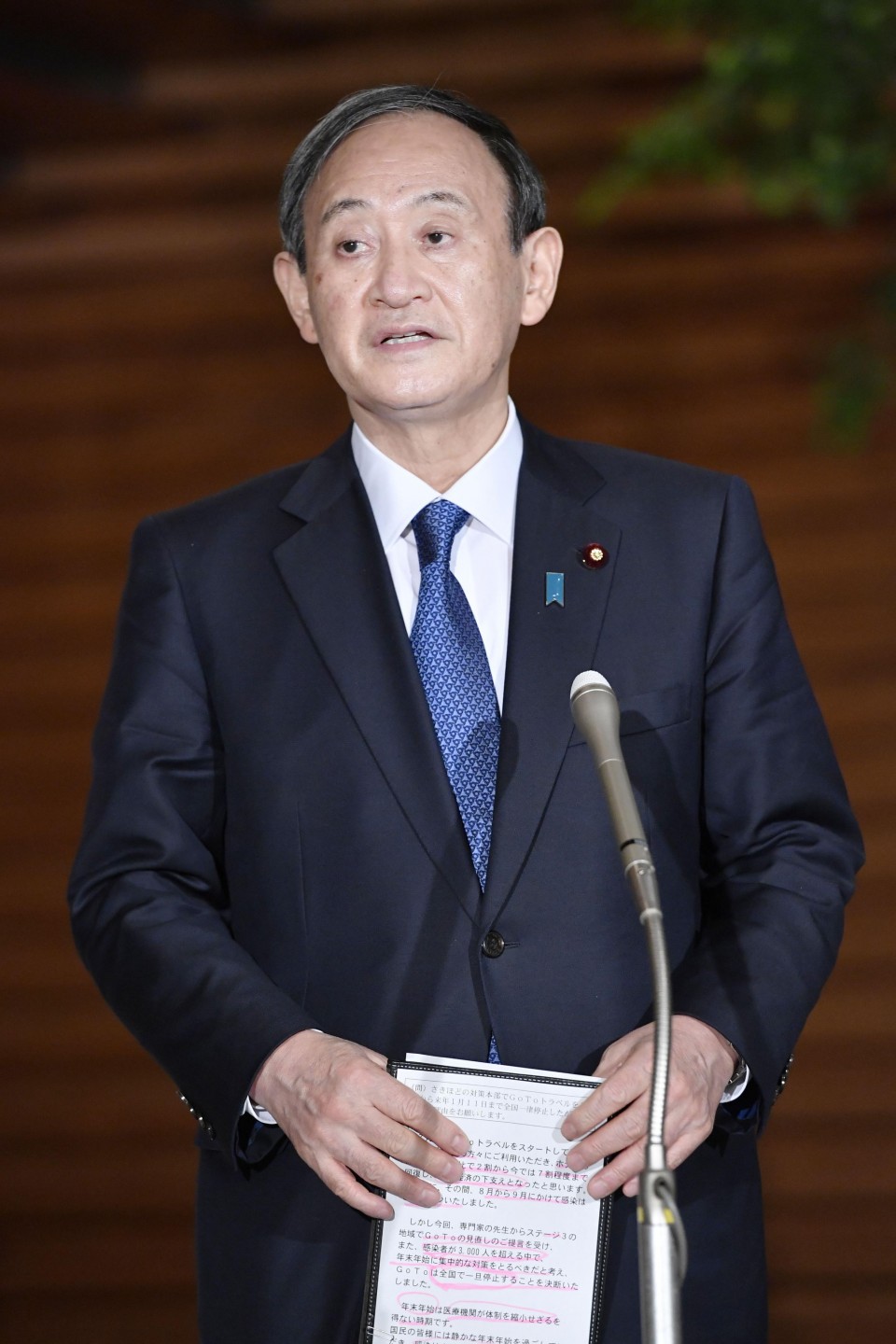 Japanese Prime Minister Yoshihide Suga speaks to reporters at his office in Tokyo after a meeting of the government's task force on the coronavirus response on Dec. 14, 2020. (Kyodo)

"I ask the people to take basic precautions against spreading infections, especially during meals, and to carefully consider whether to travel to their hometowns during the holidays, so that we may have a peaceful new year," he said.

The holidays are usually one of the busiest travel periods in the country, with planes and shinkansen bullet trains packed with vacationers and city-dwellers visiting family in the countryside.

Suga told reporters he is not thinking about declaring another state of emergency in Japan, as his predecessor Shinzo Abe did in April in an effort to quickly stem the spread of the coronavirus by asking the public to stay at home and some businesses to temporarily close.

Tokyo and Nagoya follow Sapporo in Hokkaido and the city of Osaka in western Japan in being removed from the travel promotion initiative amid a resurgence of COVID-19.

Tokyo's seven-day rolling average of new coronavirus cases stood at 503.9 as of Monday after topping 500 for the first time the previous day since the start of the pandemic. Nagoya reported 93 cases on Sunday with a total of 181 new cases confirmed in Aichi.

Tokyo decided Monday to extend its request for restaurants, bars and karaoke establishments serving alcohol in most parts of the capital to adopt shorter business hours through Jan. 11, with Aichi making a similar decision for eateries in some parts of Nagoya.

Osaka Gov. Hirofumi Yoshimura told a press conference that requests for some businesses in parts of the prefectural capital to shorten work hours or suspend operations will be expanded citywide and last until Dec. 29. 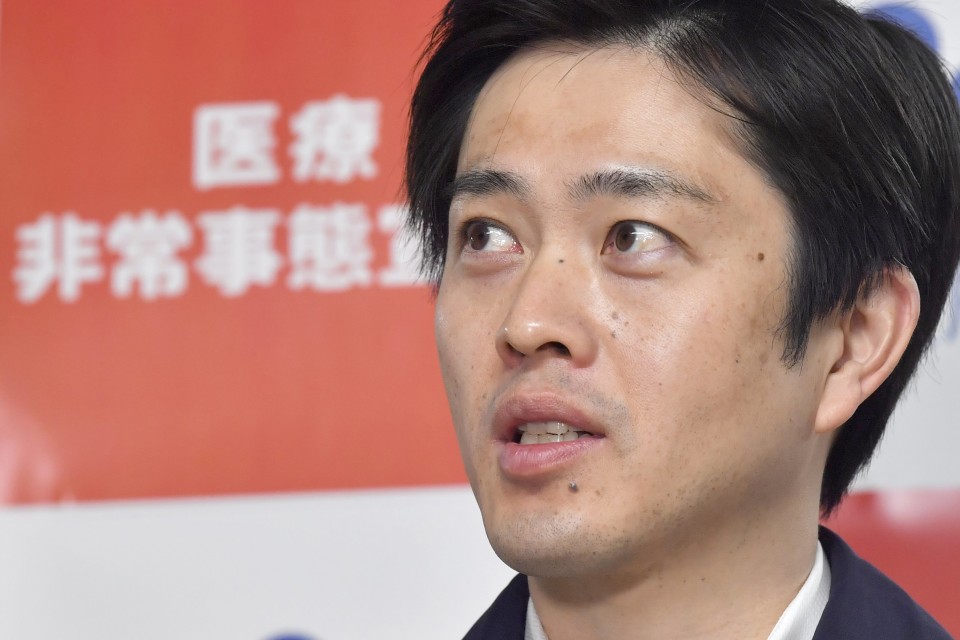 The "Go To Travel" campaign, which effectively shoulders about half of domestic travel expenses, was launched in July to help the tourism industry weather the impact of the pandemic.

Trips to and from Tokyo were initially excluded because of the relatively high number of coronavirus cases but were added in October when the "second wave" of infections in the capital eased.

The latest development came after the government's subcommittee on anti-virus steps called Friday for the halt of the campaign in areas with rising cases amid concern that the movement of people prompted by the travel campaign has increased infections.

Suga had resisted such calls, insisting on balancing efforts to curb the spread of the virus and reviving the battered economy.