The two other teams in the pool will be Oceania 1 -- either Samoa or Tonga -- and the second-ranked team from the Americas qualifying tournament.

Michael Leitch (C) of Japan runs with the ball during the first half of a Rugby World Cup quarterfinal against South Africa on Oct. 20, 2019, in Chofu, western Tokyo. (Kyodo) ==Kyodo

The Brave Blossoms, hosts of the 2019 tournament, reached the quarterfinals for the first time in their history last time out and will be looking to continue that showing in France in three years' time.

Japan will face the 2019 finalists in England led by a certain Eddie Jones, the man behind the rise of the Brave Blossoms in 2015 when they stunned the world with a 34-32 win over South Africa in Brighton during their pool-stage encounter.

England, second in the World Rugby rankings, won their only past encounter with Japan at the World Cup by 60-7 in 1987.

Argentina, who beat New Zealand for the first time in their 30th attempt during the Rugby Championship in November, are also set to provide Japan with a stern challenge.

The South Americans, currently eighth in the world, also won their only World Cup encounter 33-12 in 1999.

"We're in a tough pool and each match represents a unique challenge," Michael Leitch, captain of Japan at the 2019 World Cup, said. "France 2023 will give us another opportunity to show the world the style of rugby that is unique to the Brave Blossoms." 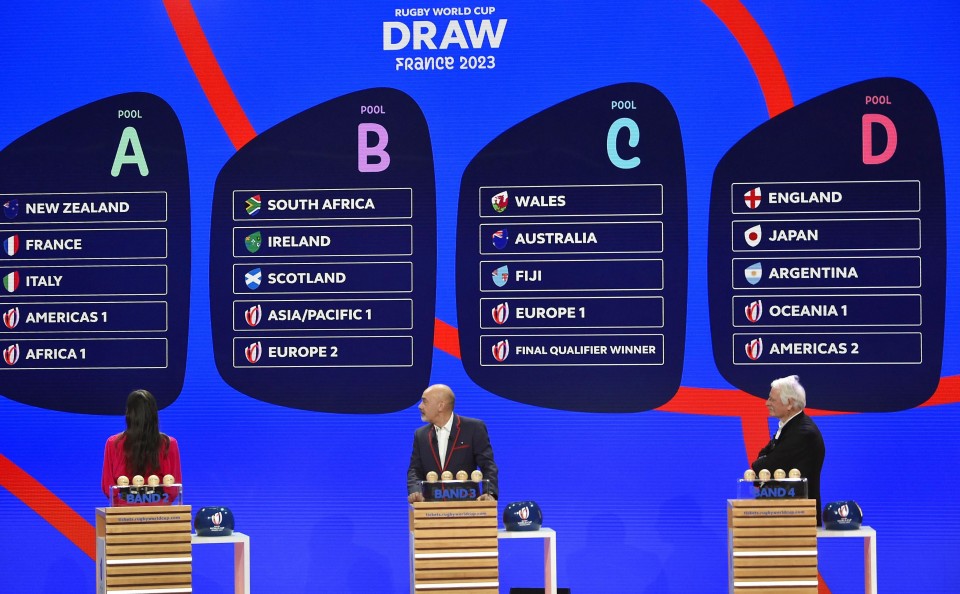 Japan were among 12 countries to clinch qualification for the 2023 tournament by finishing third or above in their respective pools at the 2019 World Cup.

Jamie Joseph's side were placed in Band 2 of the draw based on their World Rugby ranking on Jan. 1, which saw them start the year in eighth spot.

Joseph, however, has been unable to work with his team since last year's World Cup due to the novel coronavirus pandemic with all their activities canceled, including home test matches against Wales and England in the summer and their proposed participation in the Autumn Nations Cup after the November tests were called off.

Japan are currently ranked 10th in the world.

"We're enormously excited to be facing England and Argentina, as well as the yet to qualify representatives of Oceania 1 and Americas 2," Japan Rugby Football Union President Shigetaka Mori said.

"Having reached the final eight in 2019, we showed the world the potential of Japanese rugby. I trust that as a team we can maintain our focus on training and self-discipline so that we can continue to compete with the world's best."

The upsurge of public interest in the sport in Japan has been hampered by the cancelation of the 2020 Top League season and the end of the Sunwolves' five-year stint in Super Rugby.

But two players from the 2019 campaign, in particular, are hoping time spent away from Japan will help them and the Brave Blossoms go even further in 2023.

Fullback Kotaro Matsushima has excelled at Clermont since joining the French Top 14 side in the summer and scored a hat-trick of tries against English Premiership side Bristol on Saturday in the Champions Cup.

Back-row forward Kazuki Himeno, meanwhile, has headed to New Zealand where he will play for the Highlanders in Super Rugby Aotearoa.