The idea to boost Japan's standing as a financial hub is not new, but China's imposition of a national security law and tightening of its grip on semiautonomous Hong Kong, an Asian financial hub, is injecting new momentum into the drive. In addition to Tokyo, Osaka and Fukuoka have emerged as candidates for financial centers. 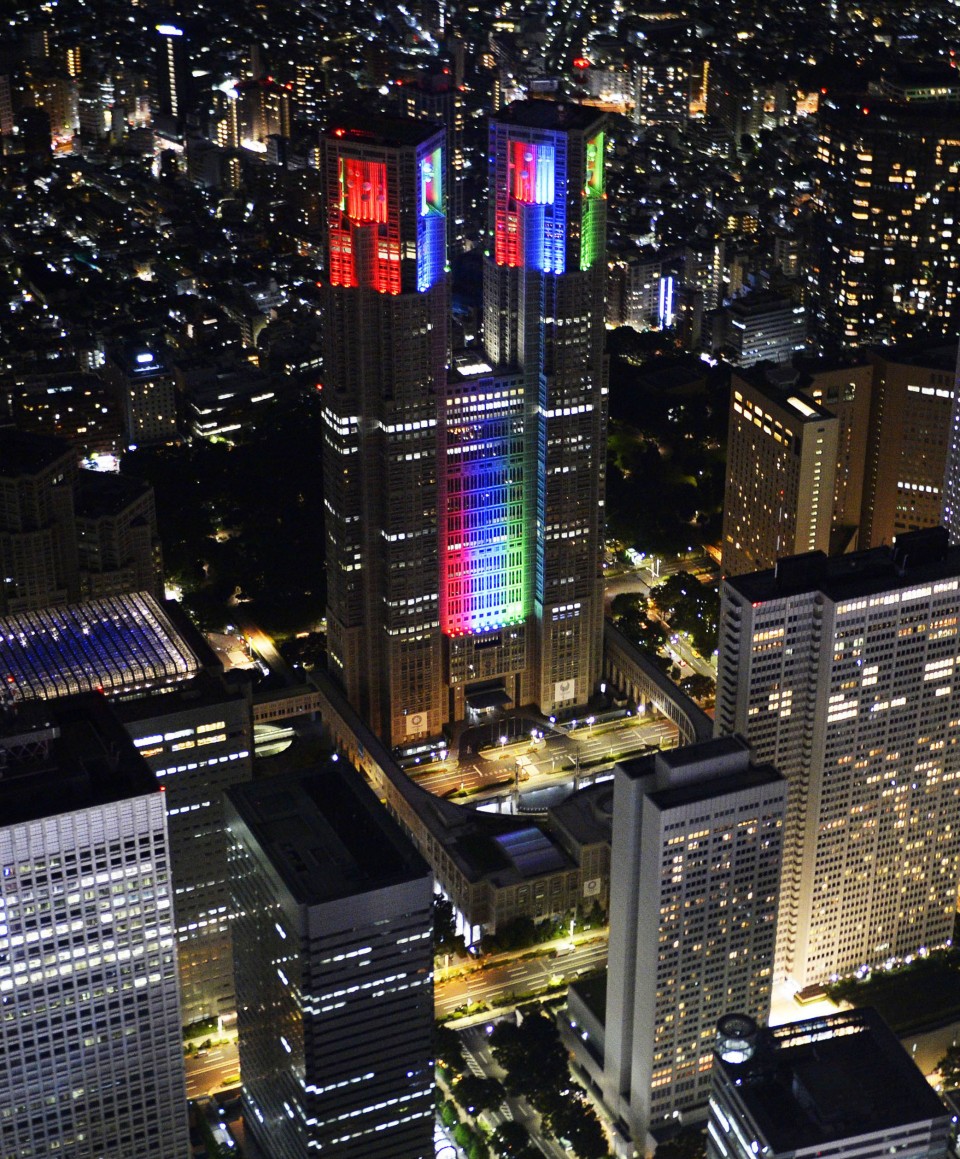 Tokyo Metropolitan Government Buliding is lit up on Aug. 25, 2018. (Kyodo)

Tokyo is stepping up its campaign to invite foreign financial institutions to the Japanese capital with its renewed focus on Asia by setting up a liaison office in Hong Kong. The office provides support and consultations both online and face-to-face to financial firms aiming to establish a business base in Tokyo. The local government is planning to update its 2017 document explaining its vision for a global financial city.

"The situation surrounding international finance has become tense. We will see intensifying competition with other Asian cities," Tokyo Gov. Yuriko Koike said when she unveiled the plan for the liaison office. "We believe this is going to be the last opportunity for us to draw companies and human resources in the financial sector."

Many foreign financial institutions have offices in Tokyo that has the world's third-largest stock exchange with about 3,700 listed firms after the New York Stock Exchange and the Nasdaq Stock Market, both in the United States.

Tokyo ranked fourth after New York, London and Shanghai in the Global Financial Centers Index from London-based think tank Z/Yen Group and the China Development Institute. It slipped one notch from the previous ranking of the world's leading financial hubs.

Higher taxes and language barriers are often cited as making Japan less attractive than other Asian rivals. Suga, who became prime minister in mid-September inheriting his predecessor's economy-boosting program "Abenomics," has promised to change that.

"We will take a look swiftly at the tax system, make sure administrative services are provided in English and consider easing visas to create an international financial center for Asia and the world," Suga told parliament in October.

In Fukuoka, a public-private sector initiative has been launched to make the southwestern prefecture a new magnet for foreign financial companies.

The city of Fukuoka, which has been drawing IT firms recently, opened a consultation center targeting foreign financial institutions last month. It provides support and advice in doing business in the city, with experts such as lawyers and accountants also available.

"In times like this, speed matters," a city official said.

Osaka is also eager to raise its status. The full-day trading outage recently at the Tokyo bourse due to a system glitch and the global coronavirus pandemic are apparently giving supporters of Osaka a reason to push the area as an alternative to Tokyo. Osaka has Japan's first integrated bourse for stocks and commodity futures.

Osaka Gov. Hirofumi Yoshimura has indicated that Osaka has what it takes to serve as an international financial center and it will step up to the plate if the central government is "serious" about changing the tax and visa systems accordingly.

Financial firm SBI Holdings Inc. led by President and CEO Yoshitaka Kitao is pushing for a plan to create an international financial center in Osaka and neighboring Hyogo Prefecture in western Japan, in cooperation with local governments.

"The time has come to create the next-generation international financial center (in Osaka and Hyogo)," Kitao told a recent press briefing, adding that the Osaka governor had promised to step up its efforts toward that end. "We will increase our calls to make it come true."