The SoftBank Hawks exploited their opponents' defensive lapses to come from behind and win Game 1 of the Pacific League Climax Series over the Lotte Marines 4-3 on Saturday.

In a season abbreviated due to the novel coronavirus, the PL trimmed its playoffs to a single best-of-five format. With the league champion Hawks receiving a one-win advantage and prevailing in the event of a tied series, a win or a tie in Sunday's Game 2 will send SoftBank to its fourth straight Japan Series. 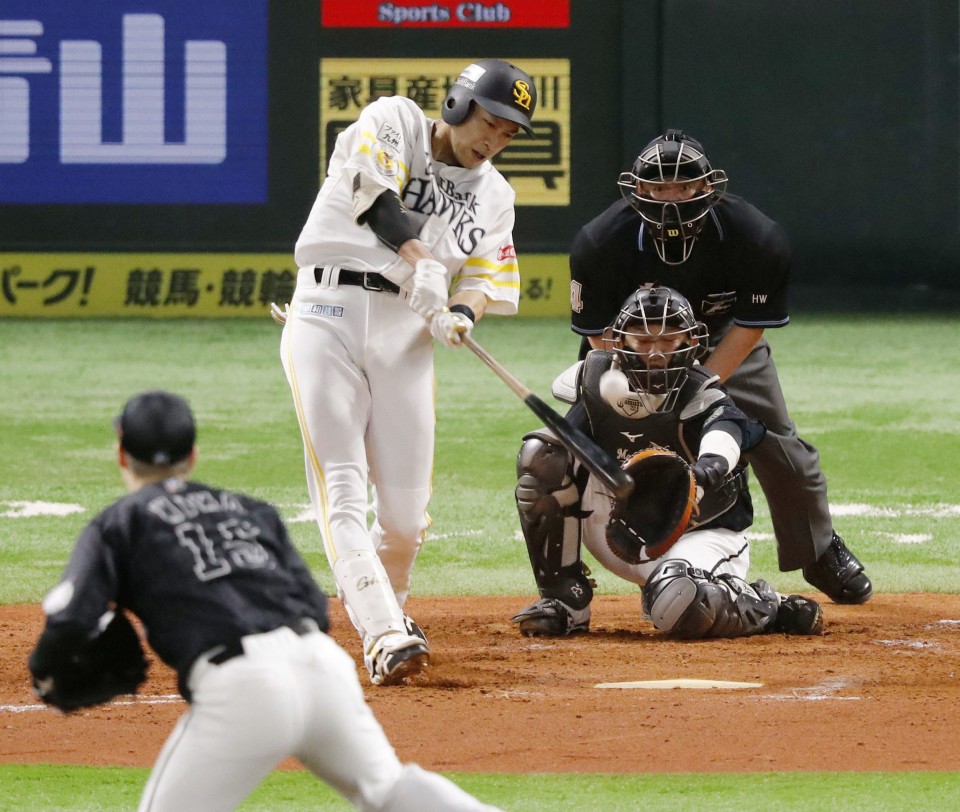 Yuki Yanagita of the SoftBank Hawks hits a solo home run in the fourth inning off Manabu Mima of the Lotte Marines in Game 1 of the Pacific League Climax Series on Nov. 14, 2020, at PayPay Dome in Fukuoka, Japan. (Kyodo) ==Kyodo

Before 19,901 at PayPay Dome, the Hawks tied the game in the sixth inning through some daring base running and an error.

With one out, Yurisbel Gracial bolted for home after second baseman Shogo Nakamura committed to throwing to first base. First baseman Seiya Inoue, however, dropped the throw, allowing Gracial the time he needed to score.

The Hawks took the lead in the eighth against reliever Hirokazu Sawamura (0-1) after two walks and a single. With two outs, Takuya Kai hit a high chopper to short and beat the throw as the go-ahead run scored.

"I just ran for all I was worth," the Hawks catcher said.

SoftBank ace Kodai Senga went seven innings and gave up three runs on eight hits thanks to some good swings by the Marines hitters.

Rookie Hisanori Yasuda made it a 2-0 game in the second, slamming a splitter off the right-field wall and into the home run terrace.

Marines starting pitcher Manabu Mima overcame a shaky first inning with the help of a big catch from right fielder Takashi Ogino, but was victimized by Hawks superstar Yuki Yanagita in the fourth. The left-handed slugger blasted a solo homer out to center field on a low pitch that had no business being hit. 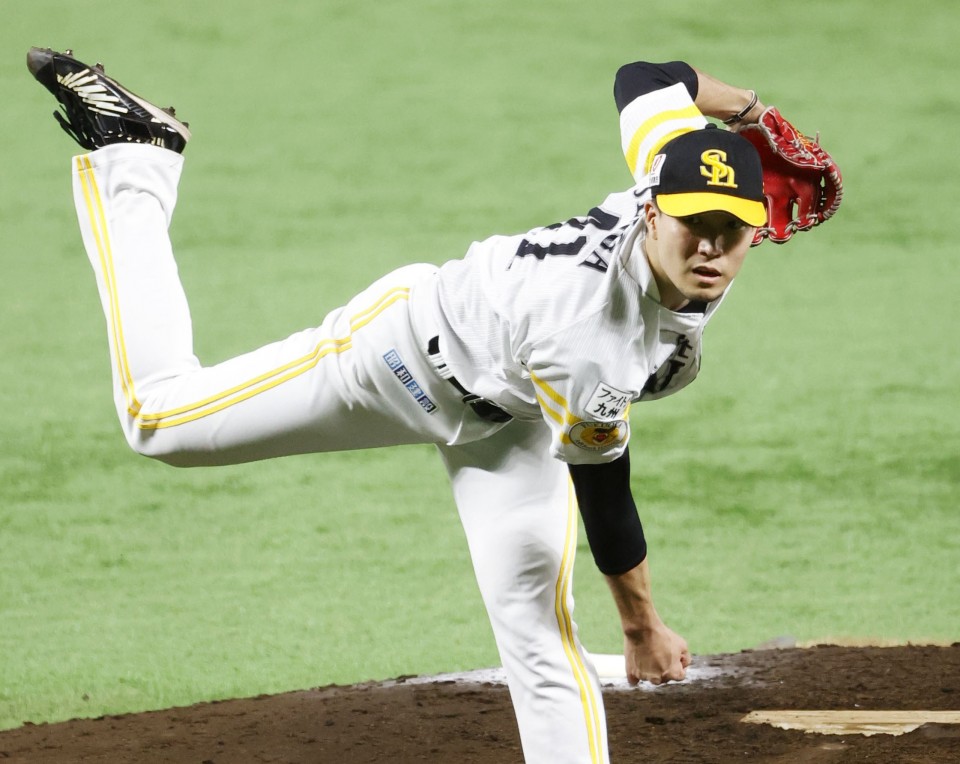 Kodai Senga of the SoftBank Hawks pitches against the Lotte Marines in Game 1 of the Pacific League Climax Series at PayPay Dome in Fukuoka, Japan, on Nov. 14, 2020. (Kyodo) ==Kyodo

The visitors made it 3-1 in the fifth, putting good swings on bad pitches from Senga as Tatsuhiro Tamura doubled and scored on an Ogino single. Mima pitched out of more trouble in the fifth after Taisei Makihara set the table with his base running. When shortstop Yudai Fujioka failed to bare-hand his chopper, Makihara sped to second for a leadoff infield double.

Mima, however, didn't make it out of the sixth after back-to-back singles and a sacrifice. Reliever Taiki Tojo surrendered an RBI infield single before Gracial hustled home to tie it against the next pitcher, Yuki Karakawa.

Lefty Livan Moinelo (1-0) worked a 1-2-3 eighth in relief of Senga to earn the win, and closer Yuito Mori did the same in the ninth.

"Nothing was different about today," Mori said. "I just tried to focus on one batter at a time, and came to the mound to come out on top."

Marines skipper Tadahito Iguchi, who began his pro career with the Hawks, rued the slip-ups.

"We were in good shape thanks to the Yasuda home run, but we couldn't outlast them," Iguchi said. "Mistakes in a playoff series can turn the tide. We can't afford another loss, so we just need to regroup and do our best."

The Hawks will send Nao Higashihama, their Opening Day starter, to the mound in Game 2. The right-hander went 2-1 against Lotte this year. The Marines will counter with former major league lefty Chen Wei-yin.

In the Central League's regular season finale, Kazuki Kamizato drove in three late runs to lift the DeNA BayStars to a 5-4 walk-off win over the Yomiuri Giants at Yokohama Stadium.

The CL abandoned its playoffs due to the pandemic, so the game was a tune-up for the champion Giants before they face either the Hawks or Marines in the Japan Series starting next Saturday.