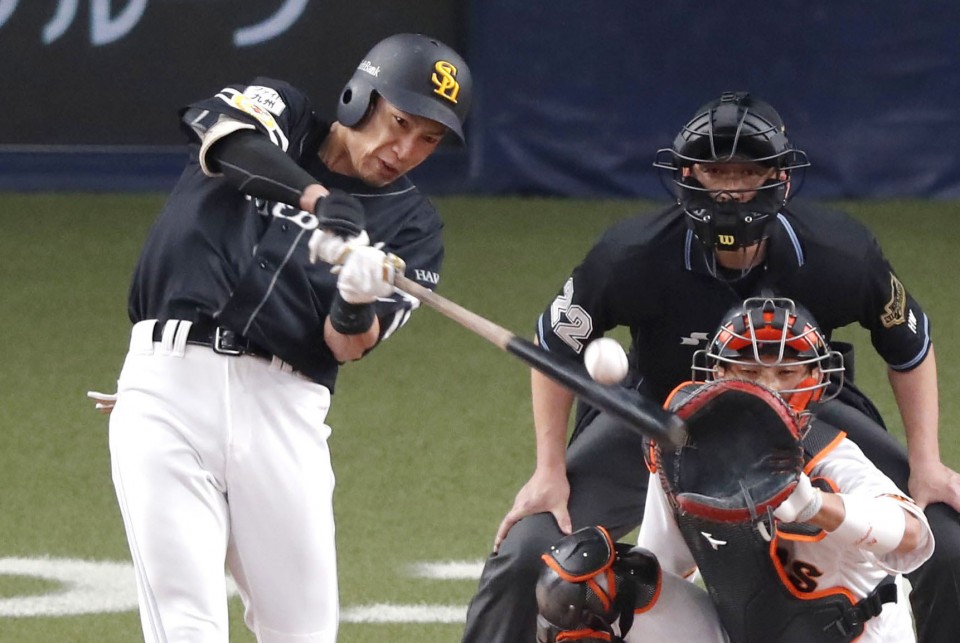 Yuki Yanagita of the SoftBank Hawks hits an RBI double in the first inning in Game 2 of the Japan Series against the Yomiuri Giants at Kyocera Dome in Osaka on Nov. 22, 2020. (Kyodo) ==Kyodo

The SoftBank Hawks built up a big early lead before easing their way to a second straight win in the Japan Series on Sunday, trouncing the Yomiuri Giants 13-2 with three home runs including a seventh-inning grand slam from Alfredo Despaigne.

Having gone 11-3 during the Pacific League season, Shuta Ishikawa picked up where he left off on the mound. He held the Giants to one hit and a walk over the first four innings, by which time the game had swung heavily in favor of the three-time reigning Japan Series champions.

Yomiuri starter Nobutaka Imamura had a night to forget. The Hawks pounded the lefty for four runs, three earned, in 1-2/3 innings on four hits and a walk.

Imamura issued a one-out walk in the first inning before Yanagita doubled in the opening run. Gracial's sharp drive was caught well by Naoki Yoshikawa, but the second baseman's wild throw to first saw the second run scored before a Kurihara single and a Despaigne groundout plated another. 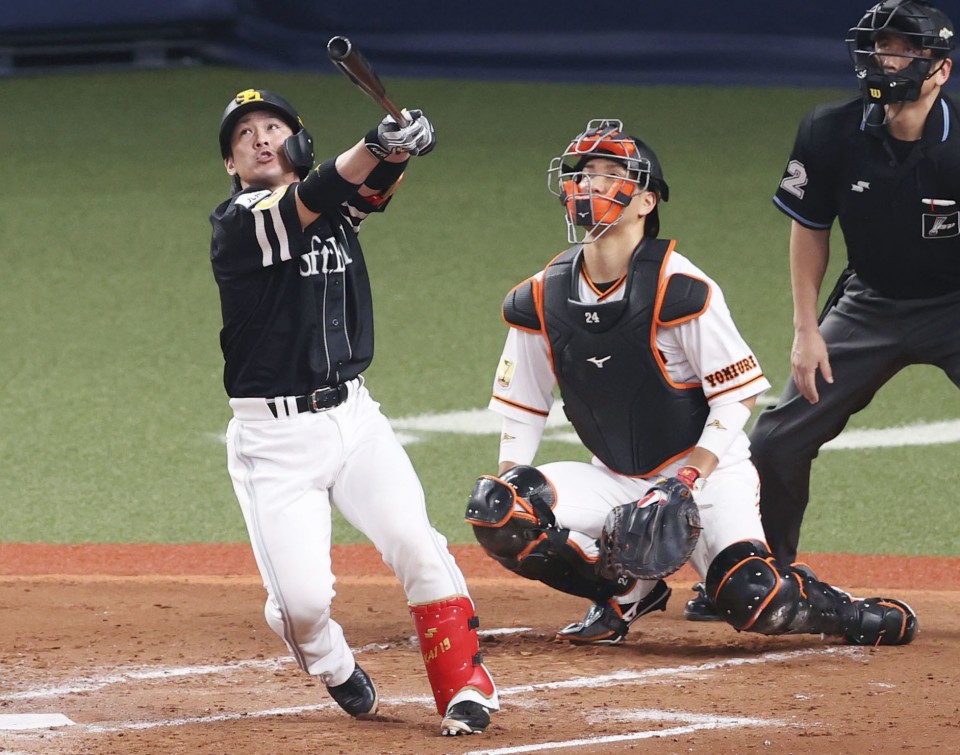 Takuya Kai of the SoftBank Hawks hits a solo home run in the second inning in Game 2 of the Japan Series against the Yomiuri Giants at Kyocera Dome in Osaka on Nov. 22, 2020. (Kyodo) ==Kyodo

Imamura gave up a solo home run to catcher Takuya Kai, batting ninth, with one out in the second before regular-season starter Shosei Togo took over with two outs. But the 20-year-old right-hander failed to stem the flow, as Yanagita opened the third with a single before Gracial went deep for a 6-0 lead.

SoftBank had a scoreless fourth but was quick to pounce on another pitching change by Yomiuri in the fifth.

Kazuto Taguchi, another starter for the Giants during the Central League season, walked Gracial with one out and gave up a single to Kurihara before Despaigne's sacrifice fly plated the seventh run. 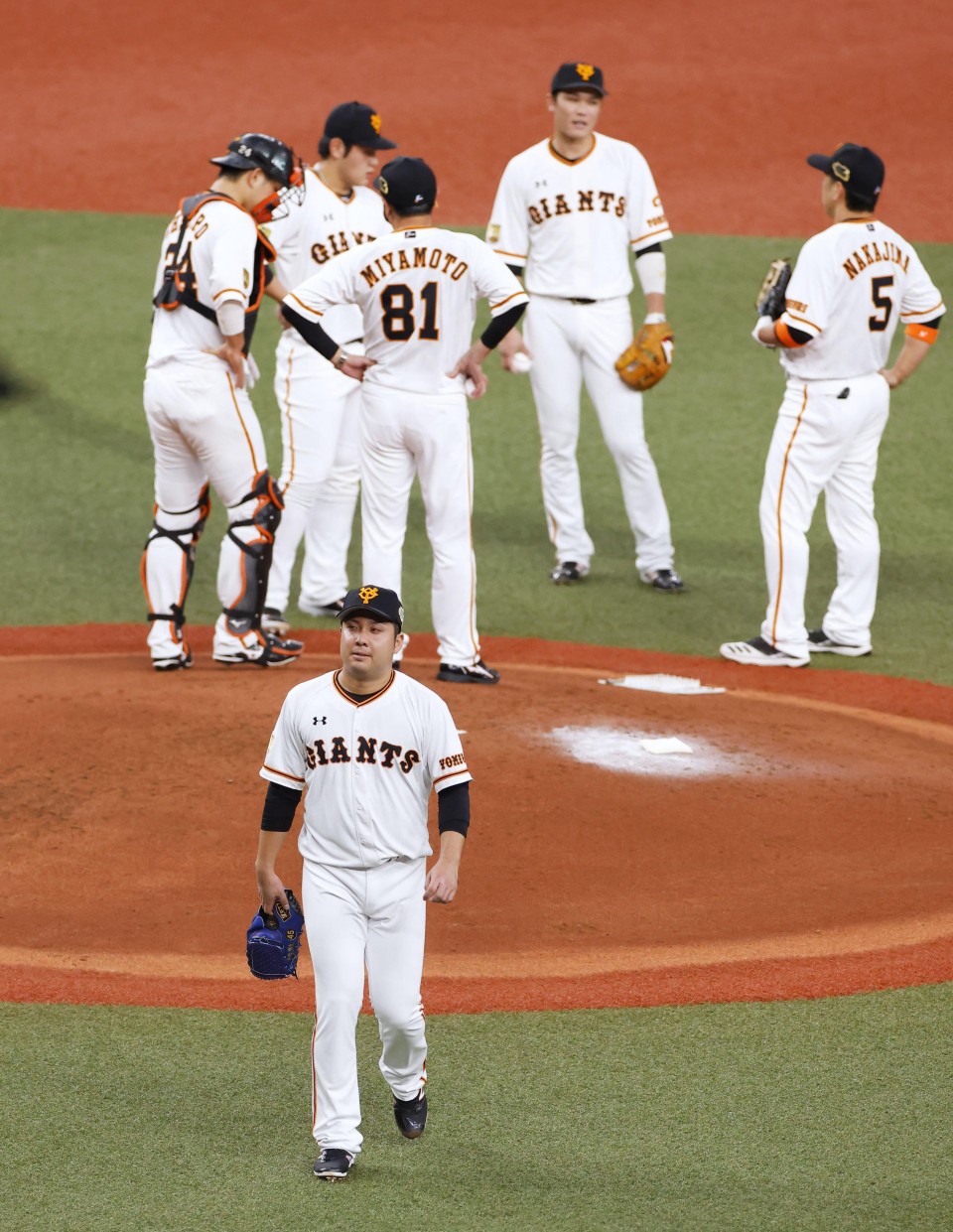 Yomiuri Giants pitcher Nobutaka Imamura (front) is pulled after giving up four runs in 1-2/3 innings in Game 2 of the Japan Series against the SoftBank Hawks at Kyocera Dome in Osaka on Nov. 22, 2020. (Kyodo) ==Kyodo

Yomiuri finally caught sight of SoftBank starter Ishikawa in the bottom of the inning, as he hit Hiroyuki Nakajima with one out before Zelous Wheeler slugged a two-run shot.

The 33-year-old Wheeler has driven in all of Yomiuri's runs in the series so far, having hit a ninth-inning sac fly during his side's 5-1 loss in Game 1.

Back-to-back singles with one out in the sixth from Hayato Sakamoto and Kazuma Okamoto saw SoftBank skipper Kimiyasu Kudo hook Ishikawa. The right-hander allowed two runs on four hits, a walk and a hit batsman over 5-1/3 innings, while striking out seven in an 84-pitch effort.

"I was able to pitch at my own tempo from the first inning, which gave my team momentum," Ishikawa said.

"I'm sure there's nervousness when starting in the Japan Series. There are cases where your body's not moving as you want it to, but he pitched well from the outset," Kudo said.

"Getting runs in the first inning was big, our players were all aiming to keep the offense going at at-bats and that led to the win today."

Cuban slugger Despaigne slammed with one out against the Giants' third reliever Yohei Kagiya, putting the game to bed with a shot over right-center field.

After a day off on Monday, the series resumes with Game 3 on Tuesday at SoftBank's PayPay Dome in Fukuoka. The best-of-seven series will return to Osaka from Game 6 if the winner is not decided by then.

The Giants are playing their home games in Osaka this year, as Tokyo Dome is unavailable due to a scheduling conflict following the delayed start to the season resulting from the coronavirus pandemic. Attendance at this year's series is limited to half the venues' capacities to limit the spread of the virus. 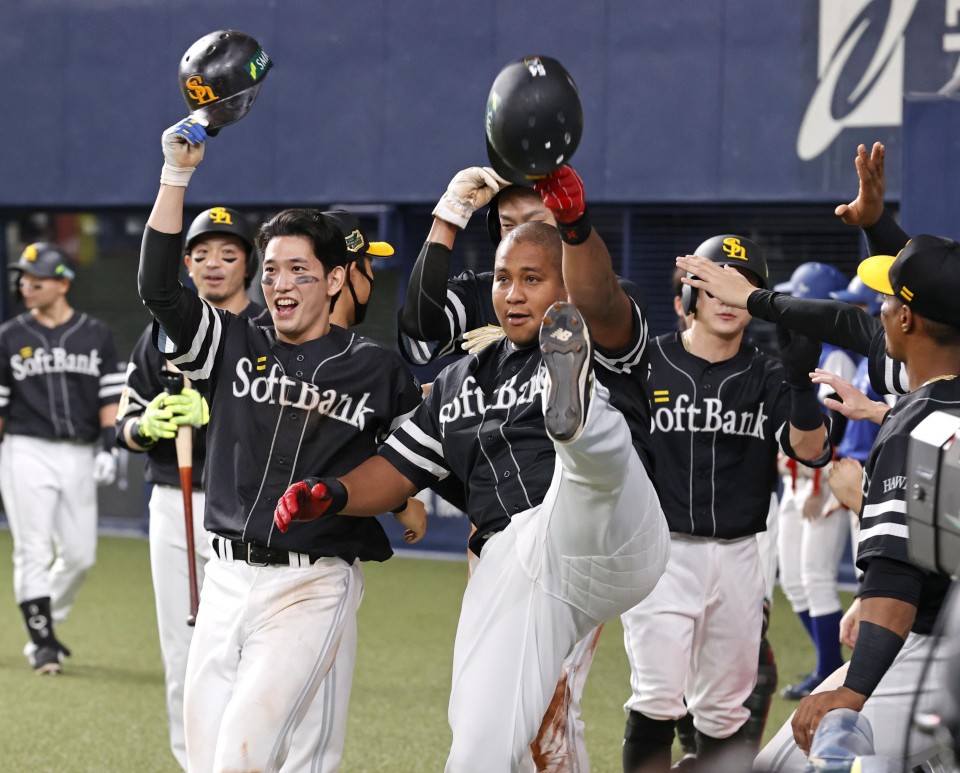 Alfredo Despaigne (C, R) poses with SoftBank Hawks teammate Ryoya Kurihara (C, L) after hitting a grand slam in the seventh inning in Game 2 of the Japan Series against the Yomiuri Giants at Kyocera Dome in Osaka on Nov. 22, 2020. (Kyodo) ==Kyodo