The SoftBank Hawks opened the Japan Series with a bang as youngster Ryoya Kurihara homered and drove in four runs to lead the Pacific League champs to a 5-1 win over the Yomiuri Giants in Saturday's Game 1.

Kurihara went 3-for-3 with a walk, a two-run homer and a two-run double off Giants ace Tomoyuki Sugano before 16,489 at Osaka's Kyocera Dome. Hawks ace Kodai Senga, starting Game 1 for the fourth straight year, worked seven scoreless innings to earn the win. 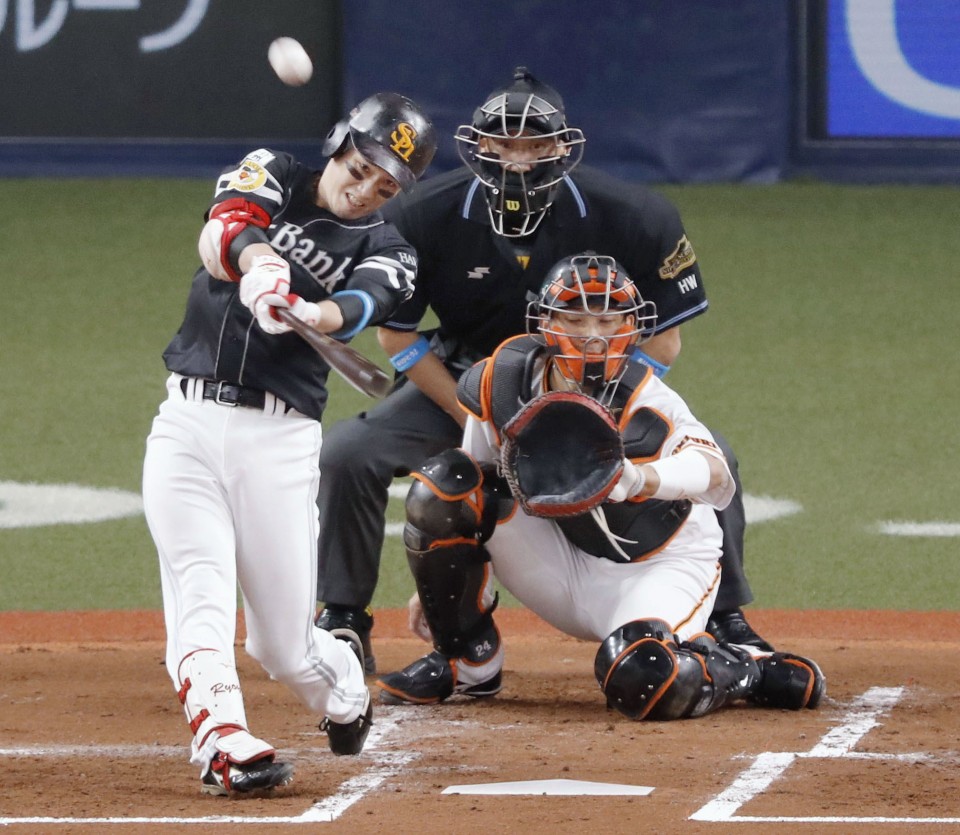 Ryoya Kurihara of the SoftBank Hawks hits a two-run home run in the second inning in Game 1 of the Japan Series against the Yomiuri Giants at Kyocera Dome in Osaka on Nov. 21, 2020. (Kyodo) ==Kyodo

The 24-year-old Kurihara opened his Japan Series account with a two-run second-inning homer after Yurisbel Gracial, the series' 2019 MVP, opened the inning with a single. Sugano, who led both leagues with 14 wins this season, hung a 2-0 slider in the heart of the zone for Kurihara who drove it into the right field stands.

"I was just so nervous. I was thinking to just put as good a swing I could on the first strike I saw," said Kurihara, who was in his first season as a regular this year. 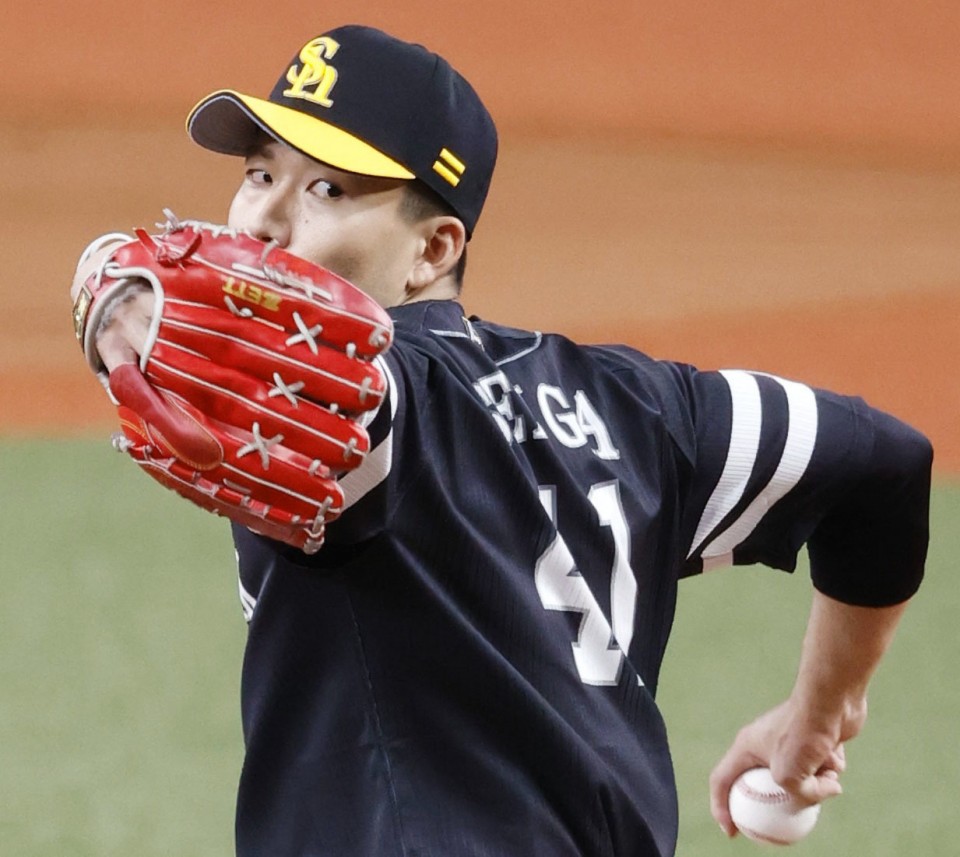 Kodai Senga of the SoftBank Hawks pitches in Game 1 of the Japan Series against the Yomiuri Giants at Kyocera Dome in Osaka on Nov. 21, 2020. (Kyodo) ==Kyodo

Giants left fielder Zelous Wheeler prevented the Hawks from taking a 3-0 lead in the fourth. Kurihara doubled with two outs but Wheeler threw him out at home trying to score on an Alfredo Despaigne single.

Kurihara and the Hawks made it 4-0 in the sixth. Sugano retired the first two batters before hitting Yuki Yanagita and surrendering a flare single to Gracial. Kurihara this time tagged a good 2-1 fastball for his third hit of the game.

Sugano allowed four runs on six hits and a hit batsman while striking out four over six innings. Senga walked three and gave up three hits over seven. He struck out six.

Hawks lefty Livan Moinelo struck out three batters in a scoreless eighth, but closer Yuito Mori filled the bases with Giants in the ninth. A walk, a single and a one-out hit batsman allowed Wheeler to break up the shutout with a sacrifice fly.

The Giants are hosting their games this year in Osaka because their home park, Tokyo Dome, is unavailable due to a scheduling conflict. Due to the novel coronavirus pandemic, which forced the abbreviated season to start late, attendance at this year's series is limited to half the venues' capacity.

The Giants will send Nobutaka Imamura to the mound for Game 2 at Kyocera Dome. The lefty went 5-2 this season with a 3.16 ERA. The Hawks will start right-hander Shuta Ishikawa, who posted a 2.42 ERA and tied Senga for the PL lead in wins with 11.

Games 3 and 4, and 5 if necessary, will be played at the Hawks' home park, Fukuoka's PayPay Dome. 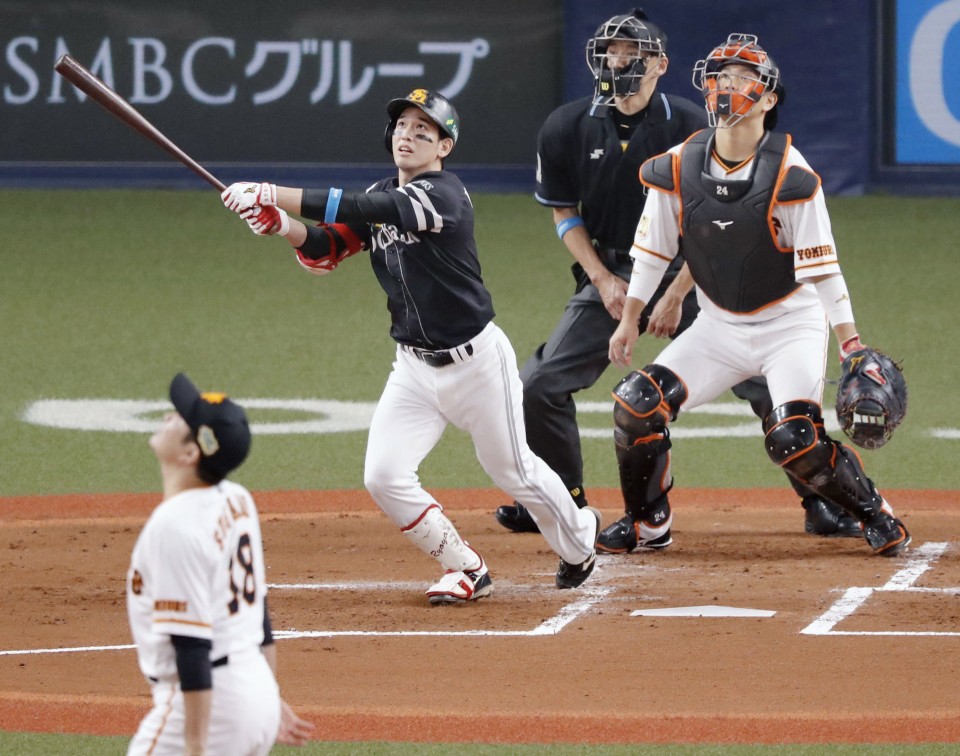 Ryoya Kurihara of the SoftBank Hawks hits a two-run home run in the second inning off Yomiuri Giants ace Tomoyuki Sugano in Game 1 of the Japan Series at Kyocera Dome in Osaka on Nov. 21, 2020. (Kyodo) ==Kyodo