Japan international Takumi Minamino scored his first goal for Liverpool in the Community Shield against Arsenal on Saturday, but the English Premier League champions lost 5-4 in a penalty shootout.

Minamino, who transferred from Austrian champions Salzburg in January, slotted past Emiliano Martinez in the 73rd minute at Wembley Stadium to make it 1-1 before the match was forced into penalties. 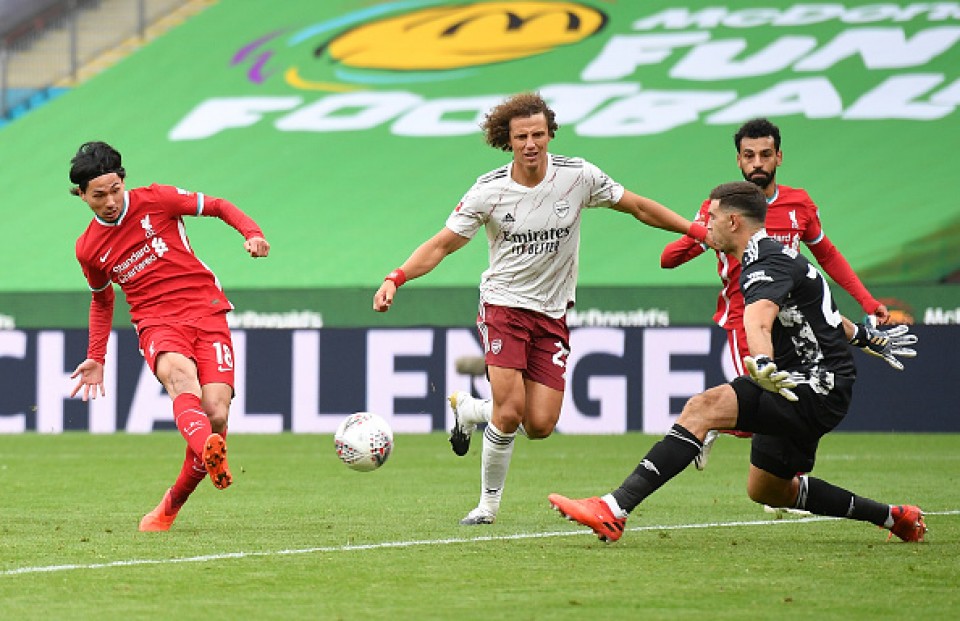 Takumi Minamino of Liverpool scores his team's first goal during the FA Community Shield final between Arsenal and Liverpool at Wembley Stadium on August 29, 2020 in London, England.(Pool/Getty/Kyodo)

Football: Unable to give my all "disrespectful" to team: Atsuto Uchida

Liverpool manager Jurgen Klopp praised Minamino's performance and called the 25-year-old's maiden strike an important step in his career with the club.

"It was big for him and big for us because it was the only thing he lacked since he is with us," Klopp said during a press conference. "He didn't score a goal (before), but had situations and was close in plenty of moments."

"The shape he is in is obviously good, I think everybody could see when he came on. Then, the goal is more or less the logical step after performing on the level he performs now, especially in the pre-season."

Klopp said he expects Minamino to "be a real player" for Liverpool now that he has had time to adjust to the league and his new life in England, made particularly challenging by the coronavirus pandemic.

"He can have an impact, that's why we signed him," he said. "It was not only the goal today. He is in between, he is really good in small spaces, his first touch is exceptional, then his decision-making between the lines is really quick."

"He came in in the most difficult period of all our lives, I would say, and had to adapt to different things, being alone in England in the lockdown and all that stuff... But he dealt really well with it because he's a super professional. So I'm really pleased for him that he could score the goal today and that's another big step for him."

Minamino was on target in the shootout but Rhian Brewster struck the crossbar as Liverpool lost the Community Shield on penalties for the second straight year. Pierre-Emerick Aubameyang put Arsenal ahead in the first half.

The Community Shield is an annual match-up between the Premier League champions and winners of the FA Cup.

Liverpool, aiming to win a second straight Premier League title, will face Leeds United in their first match of the 2020-2021 season on Sept. 12.