The last of the Kounotori unmanned cargo vessels ended its final mission Thursday as it burned up re-entering the Earth's atmosphere after transporting supplies to the International Space Station, the country's space agency said.

The Japan Aerospace Exploration Agency's Kounotori 9 left the ISS on Wednesday carrying waste materials from the station, following the delivery of food and water for astronauts, as well as equipment for experiments in May. 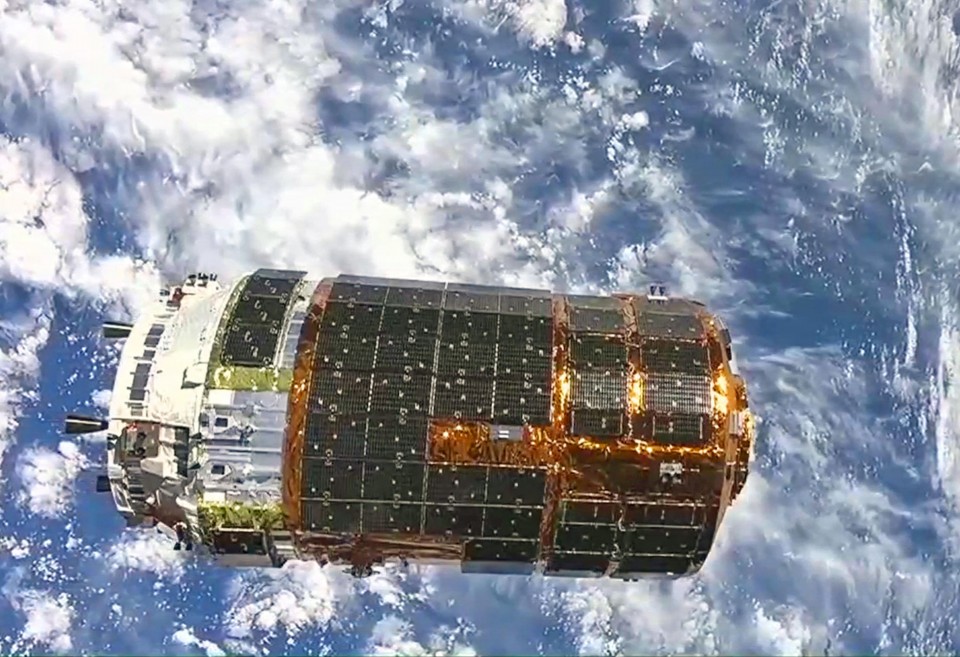 Supplied photo shows the Kounotori 9 unmanned cargo vessel as pictured by a camera aboard Kibo, the Japanese laboratory unit on the International Space Station. (Photo courtesy of JAXA)(Kyodo)

The Kounotori (which means "stork" in Japanese) cylindrical cargo transporters had successfully transported daily commodities, experimental units, samples, and replacement equipment such as batteries to the ISS dating back to 2009.

The nine transporters measured 9.8 meters in length with a payload capacity of 6 tons.

From fiscal 2021, Kounotori's successor, the HTV-X, is scheduled to transport vital supplies to the ISS, orbiting 400 kilometers above Earth. The HTV-X will be launched aboard the new H3 rocket, according to JAXA.

In May, an H2B rocket carrying the Kounotori 9 lifted off from the remote Tanegashima Space Center in Kagoshima Prefecture, southwestern Japan. The launch was the last for both the Japanese cylindrical cargo transporter and the H2B rocket.

JAXA said the Kounotori spacecraft had unique advantages over some of its rival ISS cargo transfer vehicles as it was capable of delivering materials used both onboard and outboard the ISS.