China on Wednesday launched a central government office in Hong Kong tasked to oversee enforcement of a newly enacted national security law, as stipulated under the law.

The new organization's temporary office was set up in the Metropark Hotel in Causeway Bay on Hong Kong Island opposite Victoria Park where mass demonstrations have previously been held. 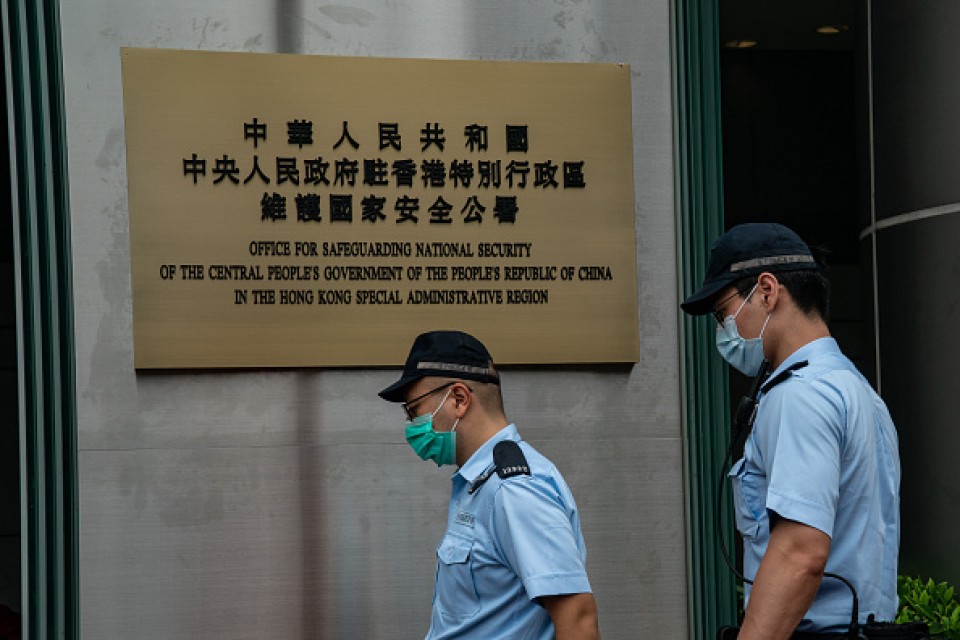 Police officers walk past a plaque outside the Office for Safeguarding National Security of the Central People's Government in the Hong Kong Special Administrative Region after its official inauguration on July 8, 2020 in Hong Kong, China.(Getty/Kyodo)

The opening ceremony there was attended by Chinese officials and military representatives as well as Hong Kong leader Carrie Lam. It was closed to the public and most media organizations.

The Office for Safeguarding National Security of the Central People's Government in the Hong Kong Special Administrative Region is headed by Zheng Yanxiong, a Communist Party official known for his handling of a mass protest in a village in Guangdong Province on the mainland in 2011.

The law stipulates that the office oversees and guides the Hong Kong government in enforcing the law, as well as collects and analyzes intelligence and information concerning national security.

The office can also exercise jurisdiction over a case that endangers national security if the case is deemed "complex due to the involvement of a foreign country or external elements."

In exercising such jurisdiction, the office can also initiate investigation. Suspects can be sent to mainland China for trial there.

The office "will perform its mandate in strict compliance with the law," Luo Huining, head of the Central Government Liaison Office in Hong Kong, said at Wednesday's ceremony outside the hotel, according to local media.

"It will not infringe upon the lawful rights and interests of any individual or organization," added Luo, who was also newly appointed as the national security adviser to the Hong Kong government, a position created under the law.

The Chinese parliament enacted and imposed the contentious law on Hong Kong on June 30, on grounds that the local government had failed to enact such a law even though it was supposed to do so following the former British colony's return to Chinese rule in 1997.

The law bans acts of separation, subversion, terrorism and collusion with foreign forces, with the maximum penalty of life imprisonment for such acts.

Lam at the same ceremony stressed the importance of the law.

"Having a law to abide by is where safeguarding national safety begins," Lam said. "We have to ensure strict law enforcement and pursue any violation of the law."