The Japan Meteorological Agency warned Thursday of the risk of further flooding and mudslides as torrential rain, unleashed since last weekend on southwestern and central Japan, will continue unabated after killing at least 60 in the Kyushu region.

A seasonal rain front spanning from the Kyushu region to the Kanto region is expected to stay, and there is "a possibility of heavy downpours in western and eastern Japan lasting until at least Sunday," according to the agency. 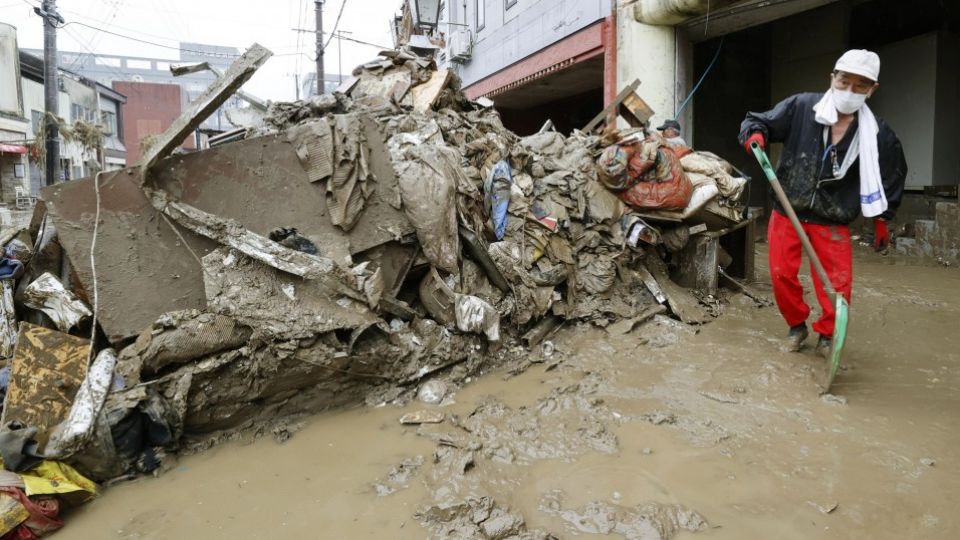 A man removes mud in the flood-hit city of Hitoyoshi in Kumamoto Prefecture, southwestern Japan, on July 9, 2020, after torrential rain. (Kyodo)

Rainfall of up to 250 millimeters is expected in the Kyushu and Shikoku regions in the 24 hours to 6 a.m. Friday, 180 mm in the Kinki region and 150 mm in the Kanto-Koshin and Tokai regions.

The rain has already left 60 people dead in the Kyushu region, with one feared dead, and at least 13 people missing.

The agency is asking for the public to remain vigilant, as the rain has already weakened the ground and caused 59 rivers, including the Kuma in Kumamoto Prefecture, to overflow, while at least 123 mudslides have occurred in 18 prefectures, as of Wednesday.

Fukuoka and Oita prefectures have suffered flooding over large areas, while the highest level of rain warning was issued for Gifu and Nagano prefectures.

Around 100 districts in prefectures such as Kumamoto and Gifu remain cut off, Chief Cabinet Secretary Yoshihide Suga told reporters, saying that he wanted to resolve their isolation as "quickly as possible."

Local fire brigades and the Self-Defense Forces dispatched to the areas are seeking information on the health and food conditions of the isolated residents, and are helping with the clean-up, he said. 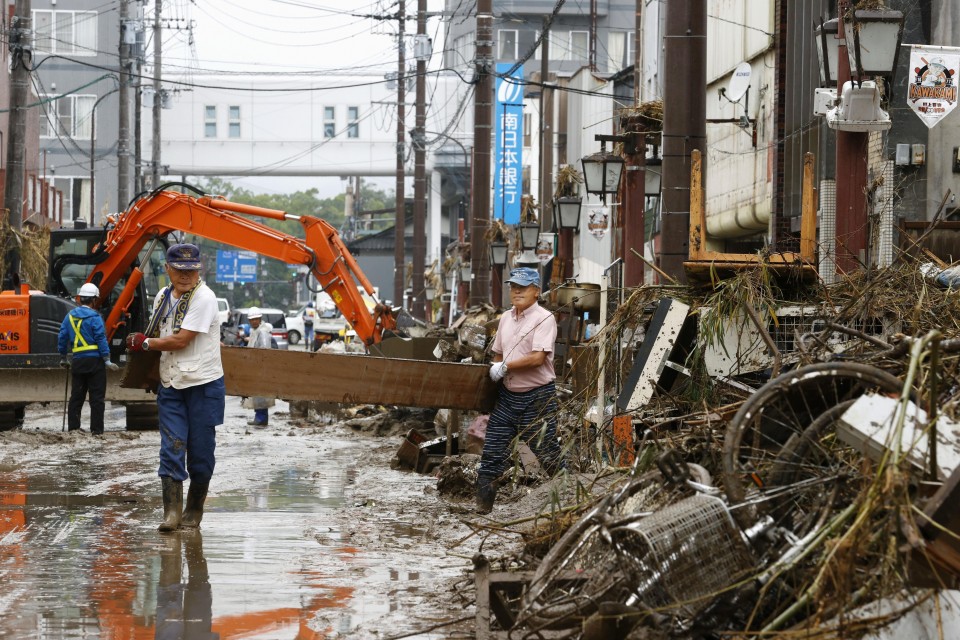 People clean up in the flood-hit city of Hitoyoshi in Kumamoto Prefecture, southwestern Japan, on July 9, 2020, after torrential rain. (Kyodo)

In the central Japan prefecture of Gifu, which has seen record rainfall, roads have been severed by mudslides and overflowing rivers, at one point cutting off 5,000 people. Around 2,300 people remain isolated according to local authorities.

Around 4,000 people were cut off in the cities of Gero, Takayama, and Gujo, until mud and debris was removed by Thursday.

Residents are attempting to clean-up the damage even as the rain continues to fall.

Tamotsu Mori, 68, and his wife worked to remove mud that had flowed into his property in Gero, where the Hida River had flooded.

He said that at one point, the water had risen up to their thighs.

"The water submerged the wood in our workshop, ruining it for our customers. How long is the rain going to last?" he asked.