Yokozuna Hakuho and new ozeki Asanoyama both picked up their third straight wins of the July Grand Sumo Tournament on Tuesday, while three wrestlers from the sport's elite ranks suffered their first losses. 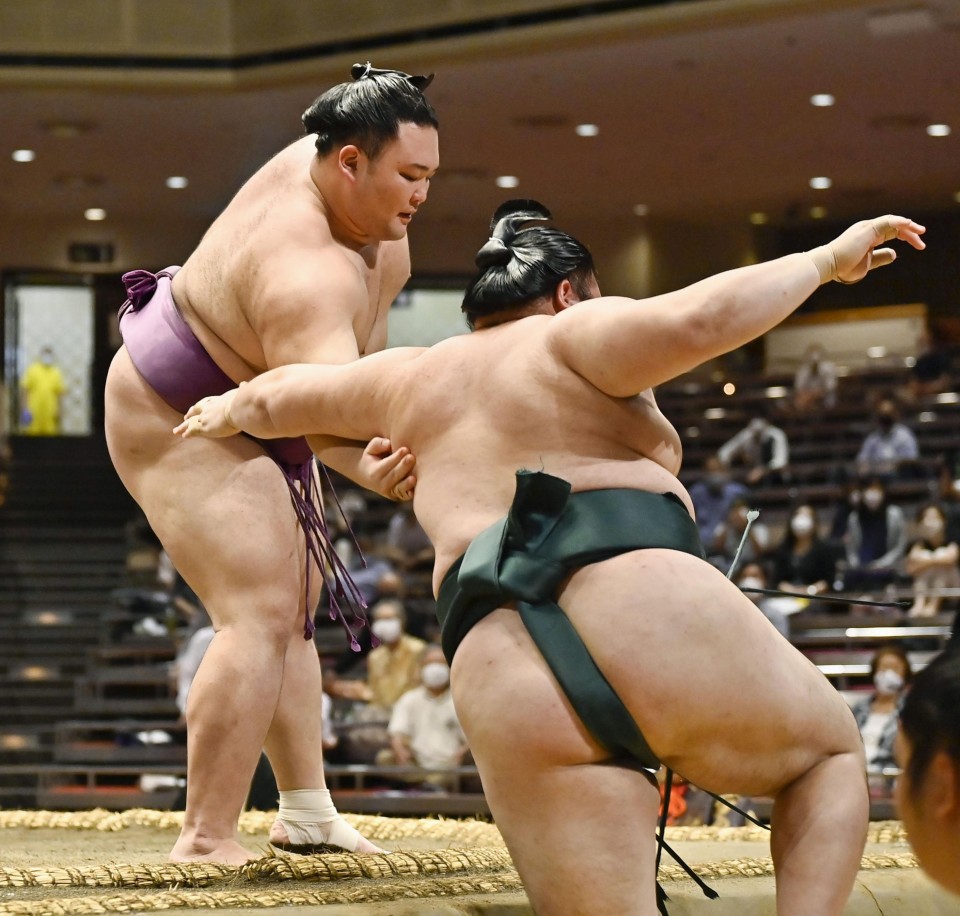 After a hard initial hit, Hakuho blasted the rank-and-filer off the dohyo so hard that his momentum nearly carried him out of Tokyo's Ryogoku Kokugikan, the tournament's venue following its relocation to the capital as a precaution against the coronavirus pandemic.

Earlier on Day 3, Asanoyama quickly wrapped up No. 1 Yutakayama (0-3) and kept him on the back foot wile inching him out of the ring. The ozeki earned his third win in five matches with Yutakayama, who is fighting at the highest rank of his career.

The 26-year-old ozeki, predicted by some to be the sport's next home-grown grand champion, is looking to win his second makuuchi title. 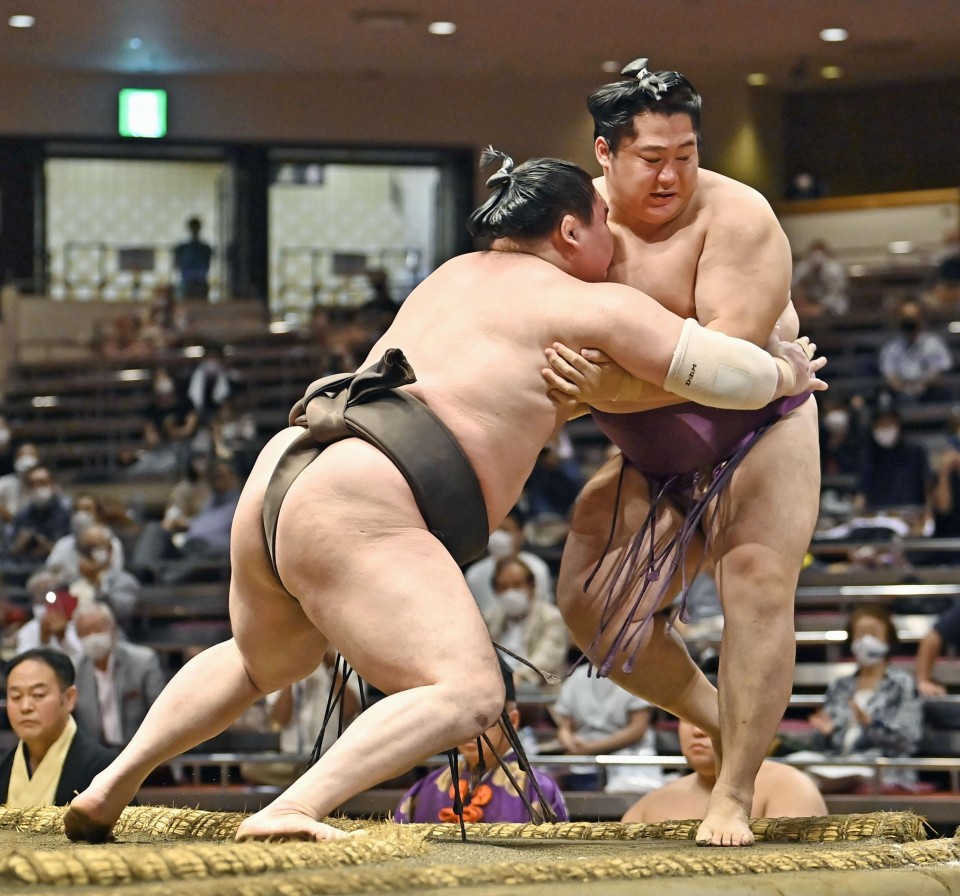 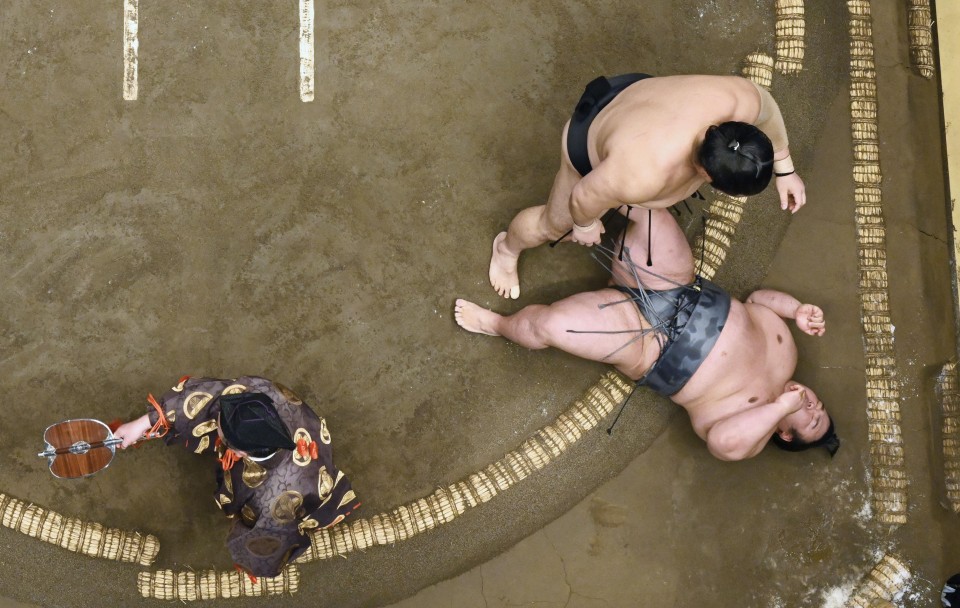 Nine men share the lead, but Ozeki Takakeisho (2-1) fell off the pace after losing to Okinoumi (2-1). Unable to penetrate the komusbi's defenses, Takakeisho went for a slap-down but was pushed backwards when Okinoumi delivered a high shove.

Takakeisho is fighting as a demotion-threatened "kadoban" ozeki for the second time in his career, and needs at least eight wins here to keep his position at the sport's second-highest rank.

Sekiwake Mitakeumi (3-0) stayed spotless after withstanding an attack from No. 2 Onosho (0-3). Onosho got the better of the initial charge and forced Mitakeumi back, but the two-time winner of the Emperor's Cup pivoted and threw the winless rank-and-filer down with a headlock.

His sekiwake counterpart Shodai, however, fell to his first loss. Shodai (2-1) got turned around while trying to drive out No. 2 Takanosho (1-2) before getting shoved over the straw trying to escape. 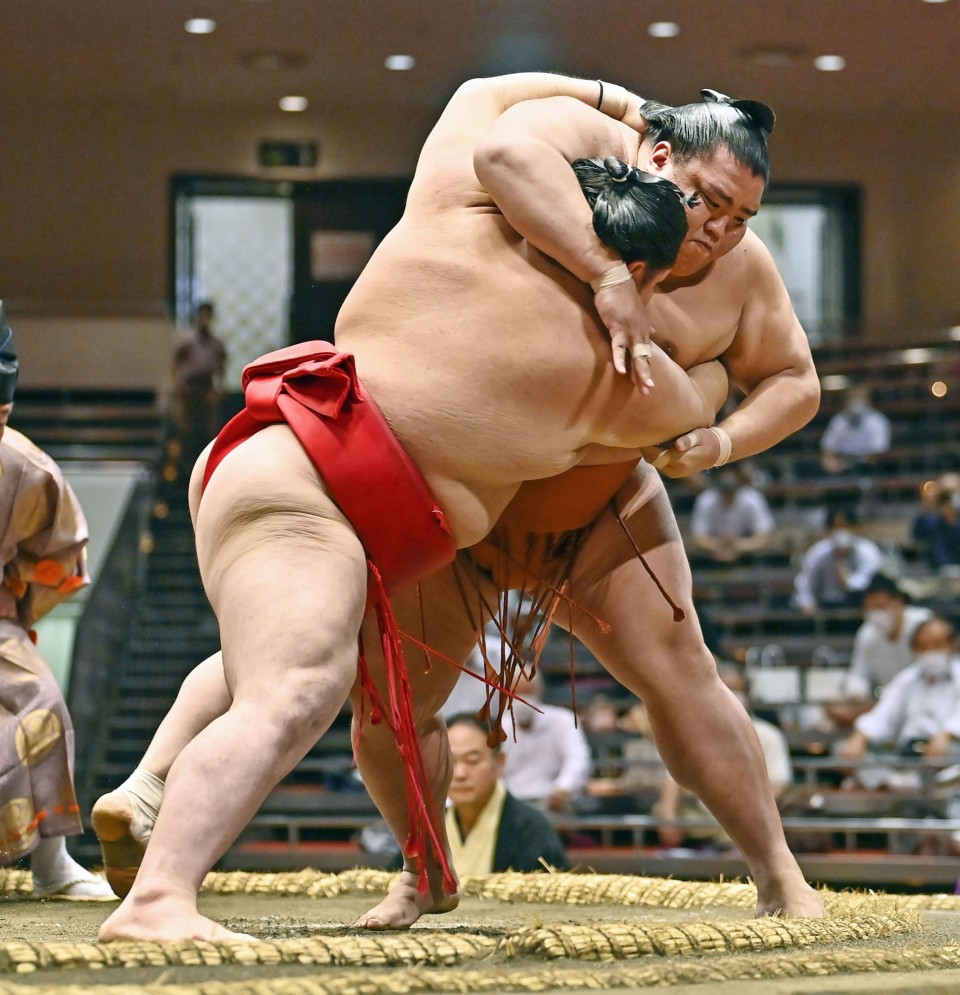 Komusubi Daieisho (2-1) also suffered his first loss after getting pushed out by Takarafuji (1-2). The No. 3 maegashira got Daieisho off balance by deflecting a shove, then sent him out from behind to break a two-bout losing streak.

No. 17 Terunofuji (3-0) continued to impress after rising back to the top ranks over the last three years, defeating No. 15 Chiyomaru (0-3) with an overarm throw.

No. 13 Takayasu (2-1) emerged victorious in a battle between two former ozeki after driving out No. 14 Kotoshogiku (2-1).

Among the rookies, No. 15 Kotoshoho bulldozed No. 16 Nishikigi (1-2) over the straw to remain undefeated in his makuuchi debut. No. 13 Kotonowaka, who went 9-6 at his first top-division meet in March, pushed out Shohozan (0-3) for his third win.

The July tournament was moved from its traditional location in Nagoya to limit travel during the coronavirus pandemic, with the Ryogoku Kokugikan limited to about a quarter of its capacity to prevent the spread of the virus.