Yokozuna Hakuho claimed his first win of the July Grand Sumo Tournament in front of a live crowd on Sunday as the sport returned after a four-month suspension due to the coronavirus pandemic.

The 15-day tournament was moved from Nagoya to the capital as a precaution against the coronavirus, with up to roughly 2,500 spectators admitted to Tokyo's Ryogoku Kokugikan each day to watch the action. Spectators are being instructed to cheer on the wrestlers through applause while refraining from shouting. 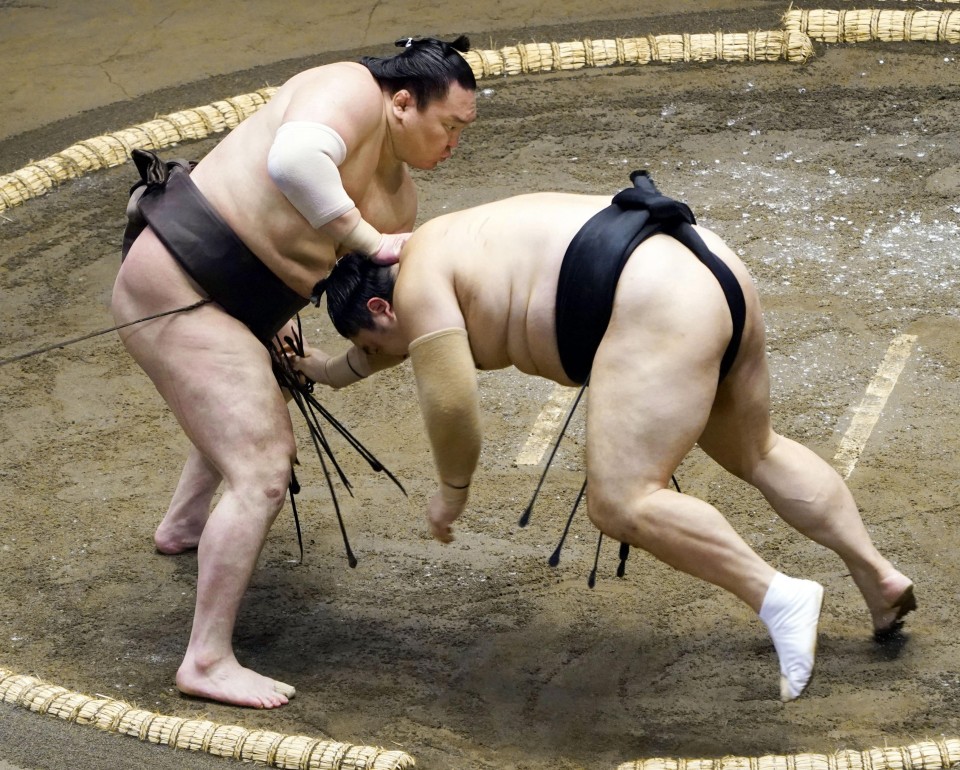 In the day's final bout, Hakuho was taken by surprise by Okinoumi, who came out blazing on the initial charge. Hakuho regained his footing and avoided an upset by forcing the returning komusubi down.

"My timing on the throw was good, and I reacted well," said Hakuho, who commented on the crowd's silence.

"It was definitely a curious sensation, but I'm grateful to them."

The other grand champion, Kakuryu, blundered on opening day and suffered his first loss against top-ranked maegashira Endo. Kakuryu went for a leg sweep but missed his target and inadvertently fell to the clay. 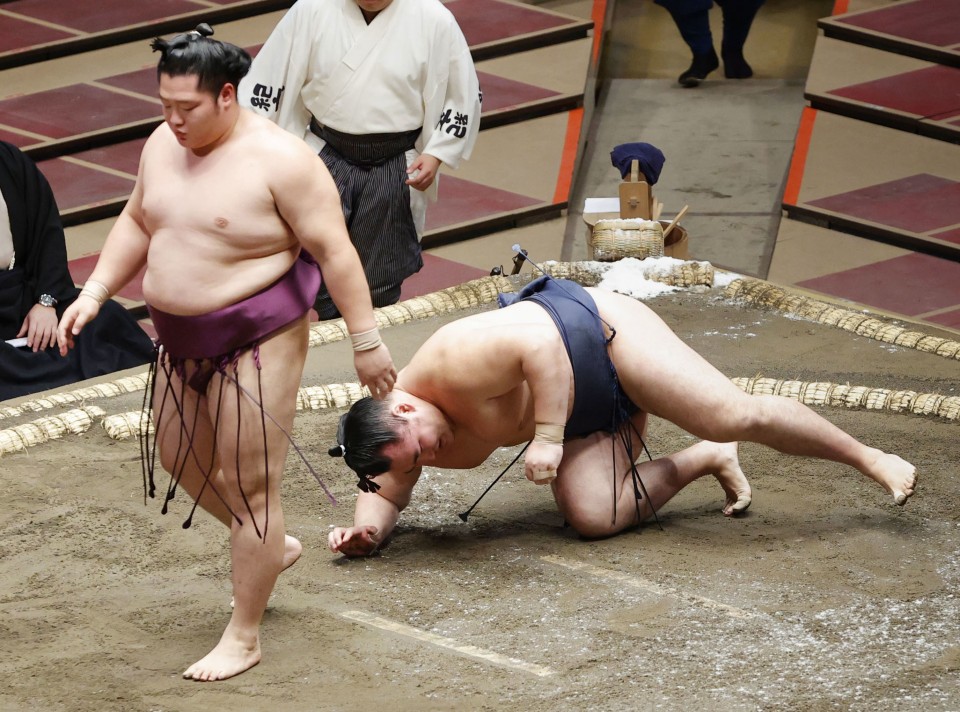 Endo, who also beat Kakuryu on Day 1 of January's New Year meet, earned his seventh "kimboshi" prize for defeating a yokozuna as a rank-and-filer.

In other bouts, new ozeki Asanoyama earned his first win at the sport's second-highest rank after making quick work of No. 2 Takanosho.

Asanoyama took the brunt of a hard initial charge from Takanosho, but was able to turn his opponent around and bounce him out from behind.

Takakeisho got off to a strong start in his second tournament as a demotion-threatened "kadoban" ozeki after he turned the tables on No. 1 Yutakayama. 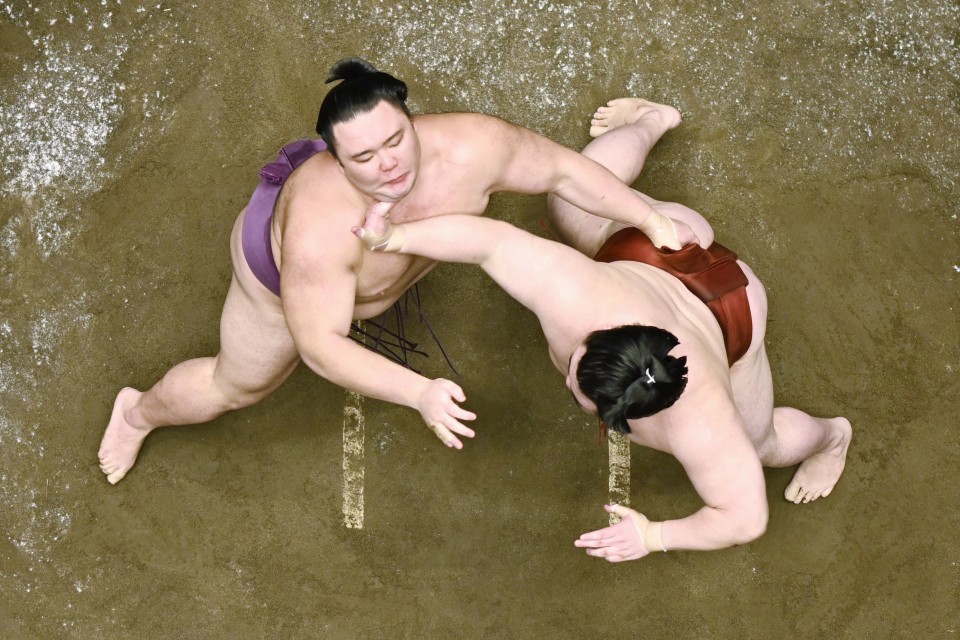 Yutakayama delivered some hard shoves and had Takakeisho on the ropes, but the ozeki slipped to the side and pushed Yutakayama off the dohyo.

The two ozeki are both seeking their second top-division title.

Both sekiwake clinched opening-day victories, with Shodai throwing down No. 2 Onosho, and Mitakeumi pushing out No. 3 Takarafuji.

Shodai secured a left-handed outside grip on Onosho's belt and downed him with an overarm throw at the edge of the ring. Mitakeumi, returning to sekiwake for the first time in three meets, dug in low against Takarafuji with an inside grip and drove him over the straw.

Returning komusubi Daieisho prevailed in a pushing-and-slapping contest against No. 3 Kiribayama. 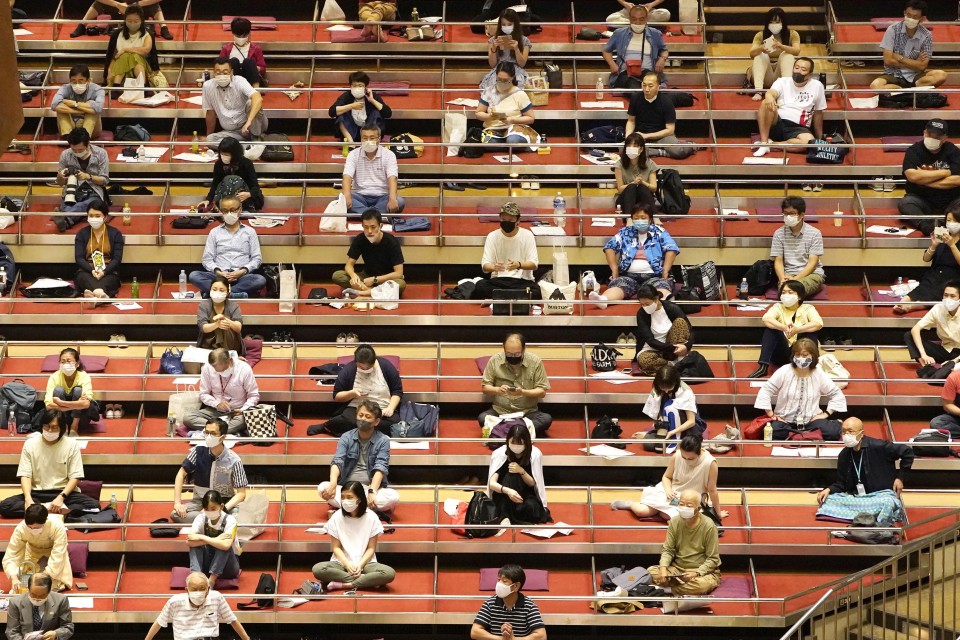 Each spectator sits in a box seat for four people on the first day of the July Grand Sumo Tournament at Ryogoku Kokugikan in Tokyo on July 19, 2020, as the tournament allows up to about 2,500 spectators per day amid concerns over coronavirus infections. (Kyodo)

No. 17 Terunofuji kicked off the meet's top-division bouts and captured his first makuuchi victory in nearly three years by thrusting out No. 17 Kotoyuki.

The former ozeki, who is coming back from surgery on both knees, became the first sumo wrestler in history to return to the top flight after dropping all the way down to the lower-tier jonidan ranks.

Two bouts later, up-and-coming grappler Kotoshoho made his top-level debut. He forced out fellow No. 15 maegashira Chiyomaru to start off with a win.

The 20-year-old makuuchi newcomer won the second-tier juryo division championship with a 12-3 record in March before the coronavirus pandemic halted sports events across the country.