A U.S. Marine Corps base in Okinawa has confirmed a further 36 novel coronavirus infections, the prefectural government said Wednesday, bringing the total number of cases at American military facilities on the island to 136.

The Okinawa government said it was informed by the U.S. forces of the latest positive tests returned by personnel at Camp Hansen, which now has seen 58 of the total infections.

In addition to Camp Hansen, 71 cases have been linked to the Marine Corps Air Station Futenma, with another five confirmed at Kadena Air Base, and one each at Camp McTureous and Camp Kinser. 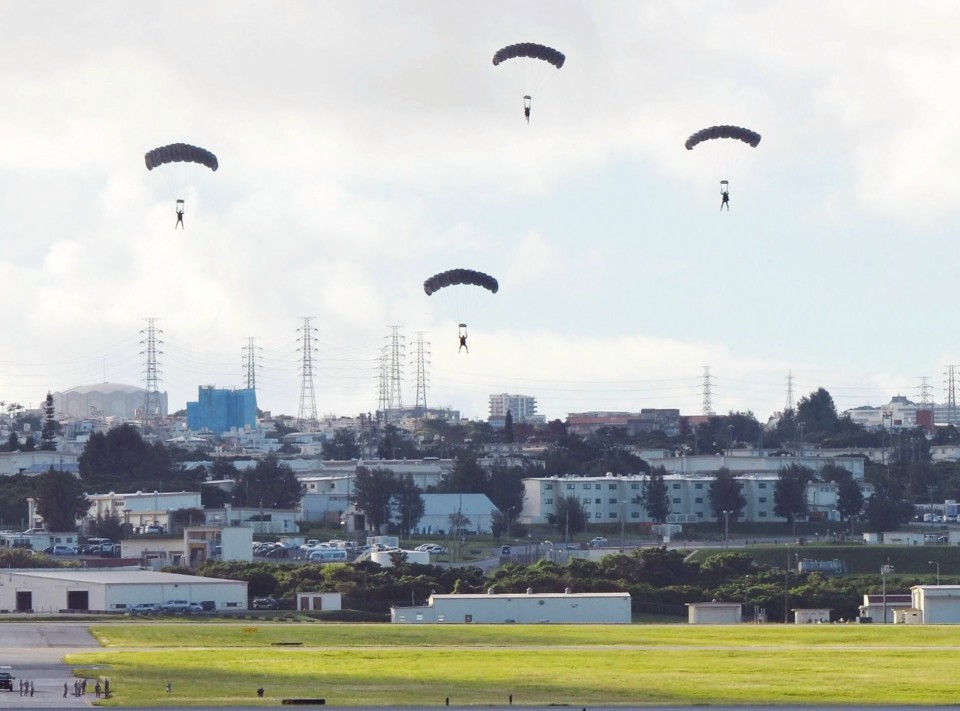 File photo of parachute drop training at U.S. Kadena Air Base in Okinawa in September 2017. (Kyodo)

The southern island prefecture, which has so far reported 148 coronavirus cases among the general population, said it would not be including the U.S. military personnel infections in its total.

Okinawa Gov. Denny Tamaki met on Wednesday with Japanese and U.S. government officials in Tokyo to relay local concerns over the on-base outbreaks.

In a letter to Defense Minister Taro Kono and Foreign Minister Toshimitsu Motegi, Tamaki called for the U.S. military to suspend transfers to Okinawa as soon as possible and in the meantime conduct polymerase chain reaction, or PCR, tests on all incoming personnel.

Tamaki also called for a review of the Japan-U.S. Status of Forces Agreement that places American troops outside the jurisdiction of Japanese law, saying they should be subject to the same quarantine guidelines.

The governor on the weekend urged local residents who attended parties with U.S. personnel in downtown areas and at beaches around July 4 to celebrate Independence Day to seek medical advice if they feel unwell.

PCR tests conducted on 130 people, including employees of establishments in the town of Chatan who could have come into contact with U.S. service personnel at Independence Day parties, all came back negative, according to the prefectural government.

Outside of Okinawa, which hosts the bulk of American military facilities in Japan, people have returned positive coronavirus tests at Marine Corps Air Station Iwakuni in Yamaguchi Prefecture, Misawa Air Base in Aomori Prefecture and at other military locations. 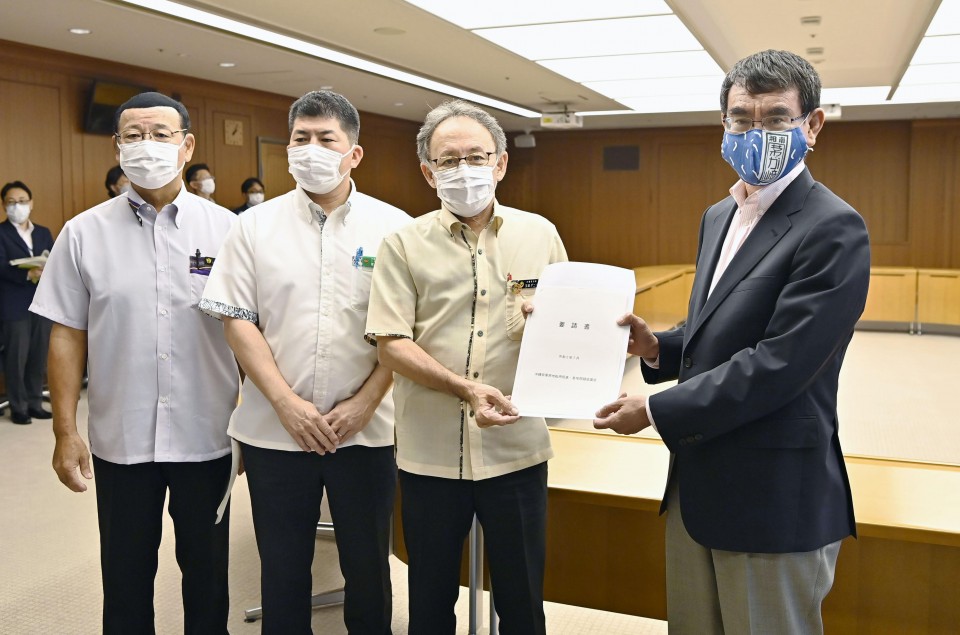 Okinawa Gov. Denny Tamaki (2nd from R) hands a letter to Japanese Defense Minister Taro Kono (R) in Tokyo on July 15, 2020, calling for the U.S. military to conduct polymerase chain reaction, or PCR, tests on all incoming personnel for the novel coronavirus. (Kyodo)