Nippon Professional Baseball released updated guidelines on Wednesday outlining measures to prevent the spread of the coronavirus when its two leagues begin admitting fans to games this Friday.

The new guidelines include refusing admission to spectators with temperatures of 37.5 C or higher and prohibiting fans from bringing noise makers or musical instruments into the stadium that could be used for cheer songs.

The league is also reserving the right to bar fans exhibiting symptoms such as coughing or having difficulty breathing, or if a certain period of time has not passed since they tested positive for the virus, or if they have been in close contact with others who have been infected. 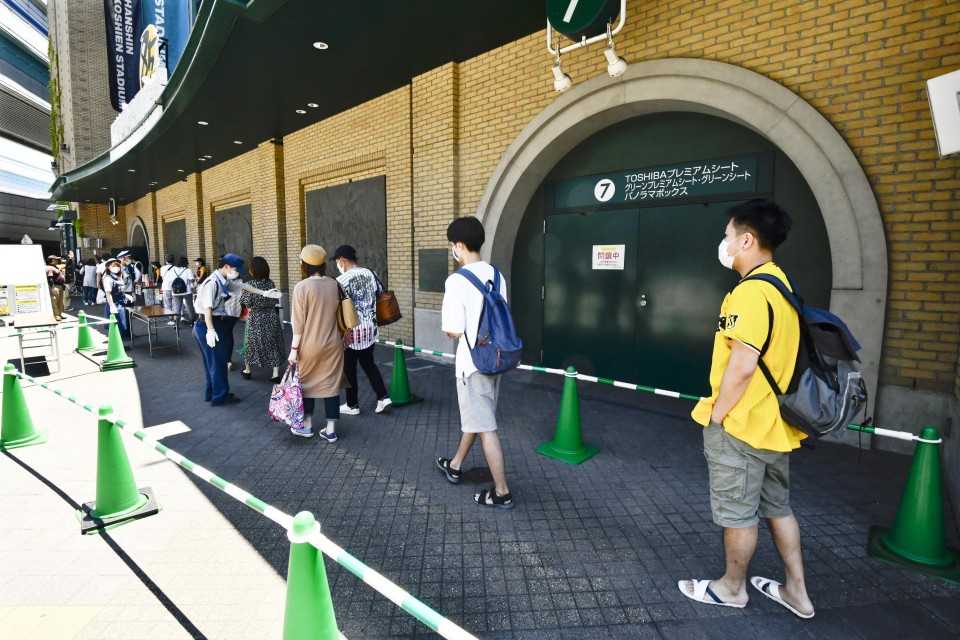 Fans enter Koshien Stadium in Nishinomiya, Hyogo Prefecture, western Japan, on June 23, 2020. The stadium allowed visitors in for a game between two farm teams on a trial basis, requiring them to undergo temperature checks and wear a face mask before Japan's professional baseball will permit spectators to attend games from July 10. (Kyodo)

Individual clubs have been tasked with handling ticket refunds for those refused entry.

In order to be admitted, fans will have to have their temperatures taken and wear masks, and will be asked to keep their ticket stubs for at least two weeks in case they need to provide their seating information to the team should they become infected.

Any type of cheering activity deemed as posing a high risk of infection, such as the customary balloon launches by some teams' fans or participating in organized cheering or shouting through cupped hands, is prohibited.

If spectators later test positive for the virus, teams will announce on their websites where the fans were sitting and plan to contact those who were seated nearby.

The 2020 NPB season started behind closed doors on June 19 after a three-month postponement. Government guidelines will allow for up to 5,000 people to attend sports events from Friday.

Teams are planning to begin admitting up to around half of their stadiums' capacities from Aug. 1, with a decision to come around July 20 based on the infection situation across the country.