Professional baseball may have returned to Japan, but with new rules in place due to the coronavirus pandemic every aspect of the game has been affected, including player-media relations.

Take the traditional postgame "hero of the game" interview as an example.

After the Rakuten Eagles defeated the Lotte Marines 5-3 last week, Hideto Asamura and Kazuhisa Makita appeared in front of the cameras for a joint hero interview, maintaining social distancing and physical separation with a transparent partition barrier. 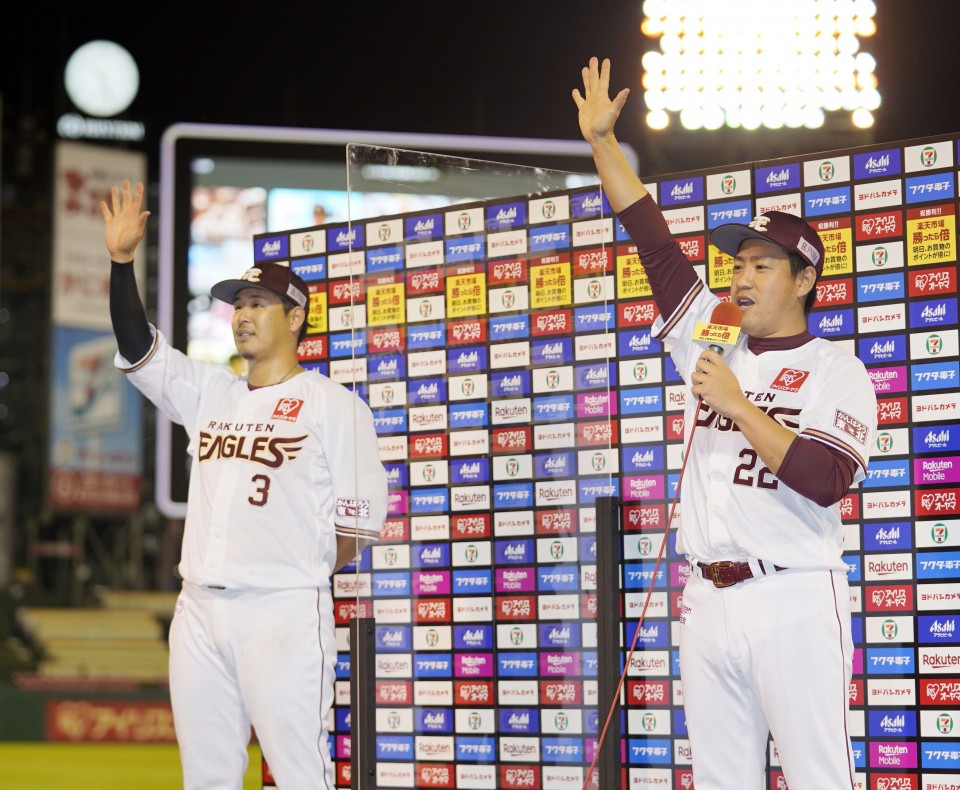 Asamura homered in Rakuten's first three runs of the game, and Makita provided some clutch relief for the hosts at Rakuten Seimei Park Miyagi.

Before the pandemic, players were typically put on the stage side by side while fans stuck around after the game to listen to the interview, broadcast over the stadium public address system.

For many fans, who were watching the game from home, these small changes instituted by Nippon Professional Baseball in return for getting their sport back may be a small price to pay. NPB resumed the 2020 season on June 19 after a three-month wait.

The announcer, who usually appears next to the honorees brandishing a microphone, had been relegated to the photographers' spot and called out questions from there.

"People are coming up with creative solutions to make playing baseball possible," former major leaguer Makita said. "It's a little sad not having any fans, but we just need to be a little more patient."

Teams have taken varied approaches to addressing the virus risk, with many of them implementing procedures that isolate players from the media.

After games at MetLife Dome, Seibu Lions manager Hatsuhiko Tsuji and players stand in foul territory and take questions from members of the press, who are kept about 5 meters apart in the stands.

Interviews are conducted in a manner ensuring that reporters keep their distance, but as Tsuji pointed out, "There aren't many reporters." Lions outfielder Takumi Kuriyama also expressed surprise at the strange scene, saying, "Isn't that pretty far?" 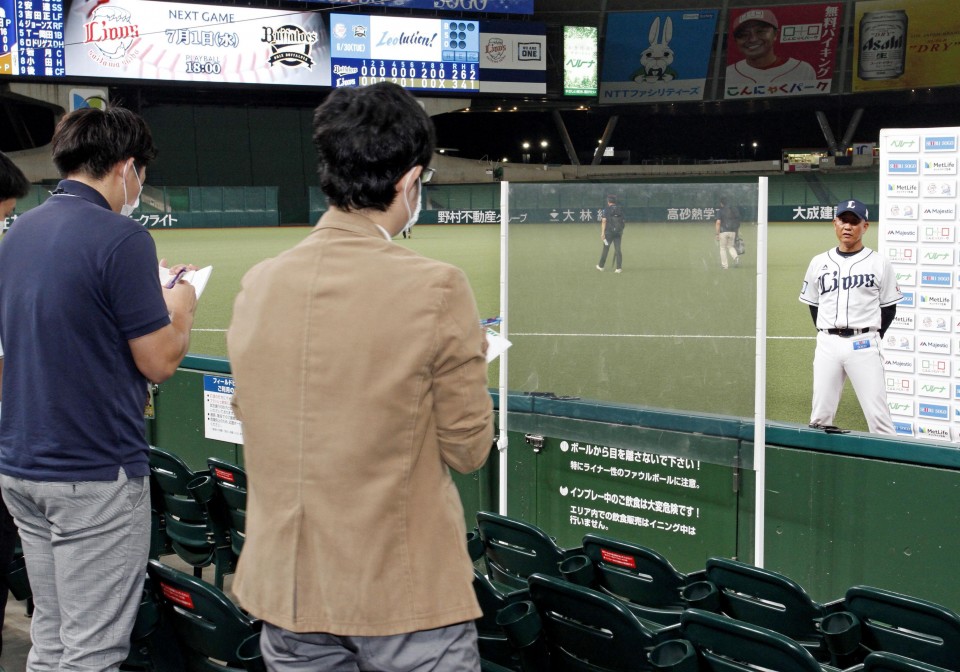 Reporters are kept at a distance from Seibu Lions manager Hatsuhiko Tsuji during an interview. (Kyodo)

With spectators barred from games until their gradual re-admission starting Friday, some issues have cropped up as well.

At Jingu Stadium, the Yakult Swallows' home field, a live broadcast discussing the pitcher's intended throw could be heard from the bench without the noise from the crowd to drown it out. An acrylic board had to be installed in the broadcasting booth, and announcers took caution not to relay the catcher's signal.

Ryo Eda, an announcer of Chubu-Nippon Broadcasting Co. in Nagoya, also shed light on an interesting problem the empty stadiums have created for radio broadcasts.

"Listeners said they always knew which player was at the plate because of cheer songs, but now they don't because there are none," he said. "The fans' presence actually helped us (radio broadcasters) too."

A male announcer from a station in Hokkaido said, "When there's no cheering or applause, it's hard to create tension and excitement (during a live game). We need different technology from before."

Announcers usually spend time at the stadium a few days before their broadcast gathering information, but they are finding the routine work difficult under the present circumstances.

For their part, clubs are trying to get the players' voices heard by fans through online conferencing platforms and telephone interviews, though there are still kinks to be worked out.

From the Eagles' third home game on, the skipper started doing interviews in person while wearing a mask and face guard.

The trial-and-error approach continues without an end in sight to the pandemic.

"The main premise is not to spread infection," said Satoshi Koike, head of Rakuten's public relations. "It's important that players understand and cooperate with us because they're in this situation, too. We have to come up with a new approach."