Singapore on Wednesday launched a campaign to get citizens to take local holidays in the hope of throwing a lifeline to the city-state's tourism industry that has been suffering from a lack of visitors due to the coronavirus pandemic.

Keith Tan, chief executive officer at the Singapore Tourism Board, hopes to inspire Singaporeans and other residents to take what he has dubbed a "Singapoliday" or a mini holiday in the country. It is part of the nine-month, S$45million (US$32 million) campaign, which includes the promotion of local hotels for staycations. 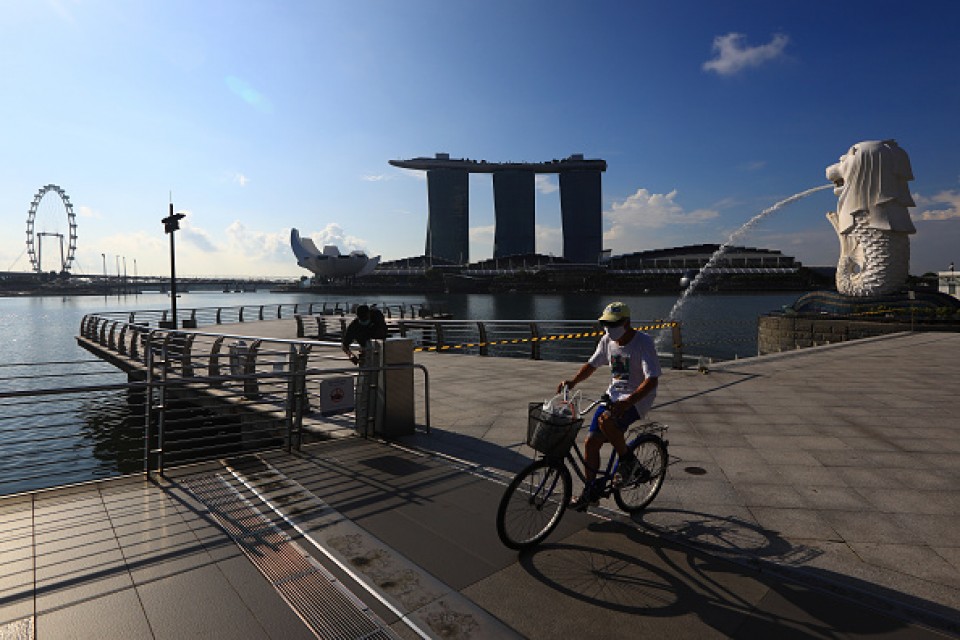 A cyclist rides past a worker wearing protective mask cordoning off the Merlion Park with tape on May 26, 2020 in Singapore. (Getty/Kyodo)

"In terms of domestic campaign, it's something that we need to do," Tan said. In "countries like Japan and Australia...a large chunk of their tourism industry in a normal year is already supported by their domestic tourism. We don't have that, so we have to work extra hard to support the domestic industry."

Noting that Singaporeans splurged more than S$34 billion on overseas travel in 2018, Tan said during a virtual press conference on Tuesday, "Since they can't spend that overseas this year...we hope to capture some sliver of that here."

Singapore hotels have seen business dry up after the city-state banned the entry of short-term visitors and the holding of large gatherings such as conferences to curb the spread of the virus earlier this year.

Currently, more than half of the nearly 67,000 hotel rooms in Singapore are being used for COVID-19-related purposes, such as isolation and quarantine, Tan revealed at the news conference.

The campaign is being introduced as the board announced plans this week for the gradual resumption of business for hotels and event organizers, which had been frozen earlier this year due to the restrictions on social gatherings and business activities.

Tan said the reopening of hotels for staycations "has to be balanced against making sure that we have enough of a buffer of hotel rooms that are still required in case there is any subsequent surge of infections."

"We haven't given carte blanche to the entire hotel industry to reopen for staycations, we do it on a case-by-case basis," he said.

The board also announced Wednesday that it has developed a risk management framework that will be tested as early as next month to help pave the way for the resumption of business gatherings of up to 50 attendees, in a sign that the city, which has been a major hub for big conferences and trade shows in Asia, is ready to jumpstart the sector.

Singapore, which has one of the largest outbreaks of COVID-19 in Southeast Asia with more than 48,000 infections so far, is currently going through the second phase of a three-stage plan for a gradual exit from a two-month-long semi-lockdown as infections in the wider community has remained low and under control.

The government has said that this second stage, which began last month, could last several months.

The pandemic has dealt a big blow to the tourism industry in Singapore, which welcomed about 19 million visitors, who spent a total of S$27.1 billion last year. Big-ticket events such as the Shangri-La Dialogue, scheduled for June this year, and the Formula One Grand Prix night street race, originally planned for September, have been canceled.

Visitor arrivals in Singapore in the first quarter of this year plummeted 43 percent over the same period last year to 2.7 million, while tourism revenue declined 39 percent to S$4 billion.