Environmentalists have warned that a global increase in use of single-use masks, latex gloves and other protective gear for use against the novel coronavirus could exacerbate marine pollution.

OceansAsia, a grassroots environmental organization based in Hong Kong, reported earlier in the month that disposable masks were found floating underwater and on seabeds, caught among ghost nets and other debris. 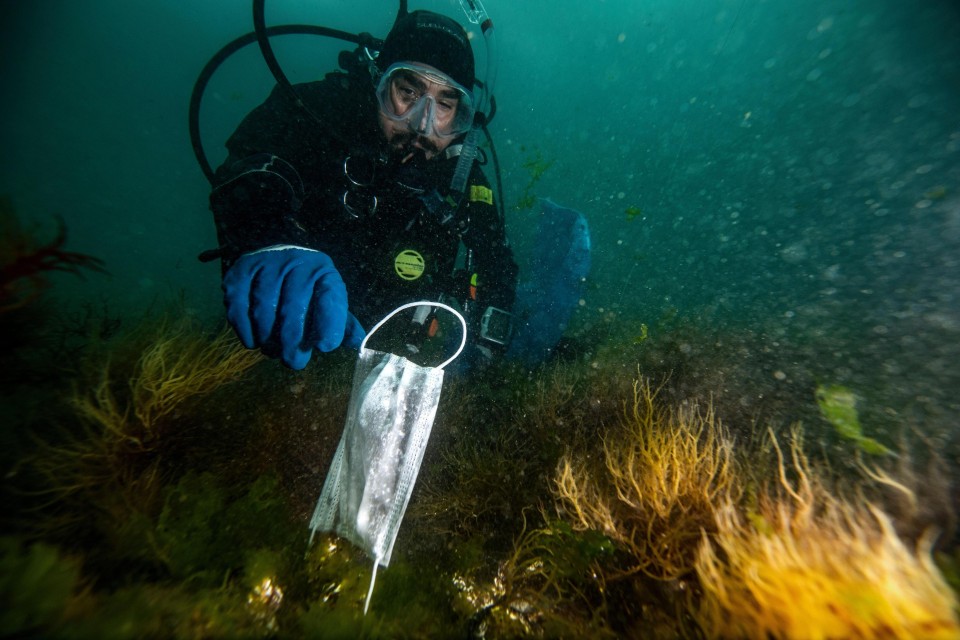 A diver collects a face mask in the sea at Gurpinar Coast in Beylikduzu district of Istanbul, Turkey, on July 14, 2020. (Anadolu Agency/Getty/Kyodo)

"A single face mask could take hundreds of years to break down into microplastic, the kind of microplastic is now being found in fish destined for human consumption, sea salt and even sea spray," the organization said, recommending that people switch to reusable masks where possible.

Japanese coasts and waters have also witnessed an apparent increase in the number of disposable masks recently, said Masahiro Takemoto, a professional diver and environmentalist.

On the other side of the world, medical waste has been adding to the glut of pollution washing up on the shores of Turkey and Europe.

"Knowing that more than 2 billion disposable masks have been ordered (in France), soon there may be more masks than jellyfish in Mediterranean waters," Laurent Lombard of Operation Mer Propre, a French environmental group, said in a Facebook post dated May 23.

Calling for citizens and governments to take action to protect the environment, the group, whose activities include cleaning up the Cote d'Azur, warned, "It's only the beginning and if nothing changes it will become a real ecological disaster."

While the economic slowdown brought by the virus pandemic has reduced carbon emissions, fishing and offshore oil drilling, and paused coastal development projects, such effects are only for the short-term, according to the U.N. Development Program and other organizations.

The temporary reprieve will not lead to a reduction in the concentration of carbon dioxide in the Earth's atmosphere, and is not sufficient for depleted marine life to recover from overfishing, experts said.

In fact, poaching in Africa and Asia is said to be on the rise as patrol boats and other surveillance have been unable to make their rounds during the pandemic.

Nirmal Shah, director of Nature Seychelles, an environmental organization based in the Western Indian Ocean country, referred to a dire situation in Africa in a webinar in June.

With Seychelles' marine sanctuary largely funded by tourism -- practically nonexistent in the coronavirus crisis -- many guides have been left without an income and have turned to fishing, leading to an increase in poaching, he said.

U.N. Secretary General Antonio Guterres has stressed the need for countries to work together to ensure the conservation and sustainability of the oceans.

"As we work to end the pandemic and build back better, we have a once-in-a-generation opportunity -- and responsibility -- to correct our relationship with the natural world, including the world's seas and oceans," Guterres said in a video message marking World Oceans Day on June 8.