Travelers in Japan were cautious Thursday as they set out on excursions on the first day of a four-day holiday, even amid persistent concerns over rising novel coronavirus infections in the country.

The national holidays began a day after the "Go To Travel" subsidy campaign was launched to help revive the domestic tourism industry affected by the virus, but with Tokyo being excluded due to a spike in new cases in the capital. The government covers part of the cost of the trips, but the initiative has stirred worries it could worsen the outbreak.

Japan reported Thursday more than 980 new daily coronavirus infections, marking a record for a second straight day. The figure brings the nationwide tally to more than 28,900, including some 700 cases from the Diamond Princess, the cruise ship quarantined in Yokohama in February.

While Tokyo Station was busy with people dragging suitcases, shinkansen bullet trains saw vacancies in both their reserved and non-reserved seats.

"I decided to travel because I'm not sure until when I should be refraining from taking trips," said Seiya Noro, 32, who was traveling to Sendai, Miyagi Prefecture, from Kisarazu, Chiba Prefecture, to see his older brother.

Hakone in Kanagawa Prefecture, known for its hot springs, also fully reopened the Hakone Tozan Railway for the first time in nine months following the resumption of the part connecting Hakone-Yumoto and Gora. The line had been closed after a typhoon caused a landslide on the tracks last October.

"I'm happy to see many people riding the train," said Masashi Kashiwada, 57, from Tokyo. Seeing the fallen trees and remnants of the disaster, Kashiwada said, "It made me realize just how serious the disaster was."

At Tokyo Disneyland, another popular spot for vacationers, near Tokyo, Sakae Nagai, 56, was among the visitors. "I think people should enjoy going out while taking precautions," Nagai said.

Ayano Nakayama, 30, came to visit Universal Studios Japan in Osaka Prefecture with her daughter on an overnight trip. "I'm worried, but the park has measures against the virus, so I'd like to have fun," she said. 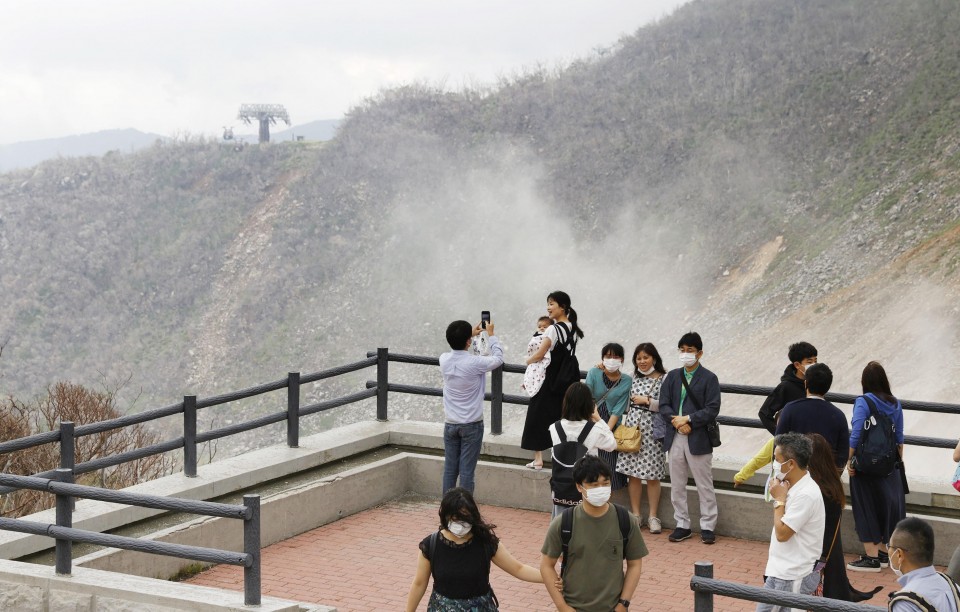 Travelers also gathered at popular hot spring resort Yufuin in Oita Prefecture, which was recently battered by torrential rainfall earlier in the month.

"I'm grateful that people are here because the number of customers plunged due to the heavy rain," said souvenir shop owner Koei Hino, 42.

"But I'm worried about the spread of the virus with so many people traveling during the long weekend," he added.

Under the 1.35 trillion yen ($12.6 billion) travel campaign, the government will eventually subsidize up to half of travel expenses, including accommodation and transport fees. Initially, it will provide discounts worth 35 percent of total costs.

However, the tourism push was thrown into disarray recently when the government decided to remove trips to Tokyo and by its residents from the campaign as the number of daily cases in the capital continues to hit record-highs in July.

Tourism minister Kazuyoshi Akaba initially said the government had no plans to compensate for cancellation fees incurred by the decision to exclude Tokyo at the last minute but reversed the stance on Tuesday amid a public outcry prior to the launch.

The subsidy scheme was initially slated to begin in August before Japan's summer holidays around the middle of the month, when many people living in major cities return to their hometowns. But it was moved forward in time for the current four-day weekend.

Baseball: NPB to maintain cap on spectator numbers till end of August