TOKYO - Organizers of the postponed Tokyo Games said Wednesday they have agreed with the International Olympic Committee to hold a "simplified" games next summer to ensure safety from the coronavirus and reduce the financial impact of the one-year delay.

Speaking at a press conference following an online meeting of the IOC executive board, Tokyo Olympic organizing committee President Yoshiro Mori and CEO Toshiro Muto said the IOC and local organizers had identified 200 items to simplify the games but avoided going into detail.

Muto was specific about the top priority, however, saying countermeasures to ensure safety against the coronavirus were "the biggest challenge."

He also said organizers would consider reducing the number of people involved in the games -- other than athletes and spectators -- with IOC officials and representatives from national sporting bodies likely to be among those cut.

The CEO also confirmed that the Olympic torch relay was among the 200 items under review. Under a road map to the games released by the organizers, the Japanese leg of the relay is set to take between next March and July. 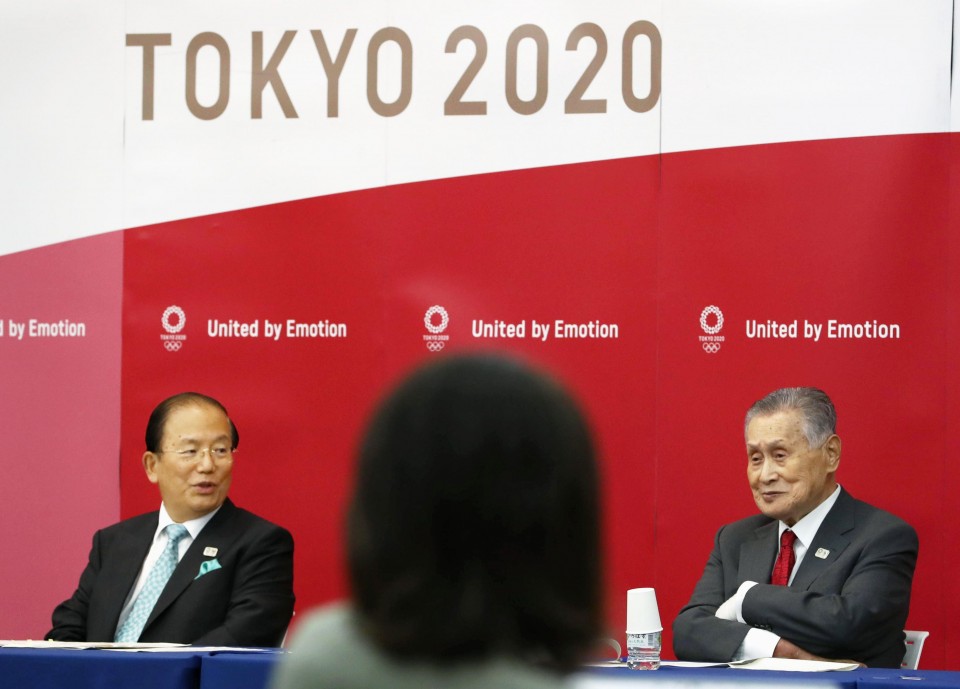 At a later meeting of the IOC executive board, IOC executive director Christophe Dubi explained there were five different categories of candidate items for simplification: service levels, quantities of things provided during the games, activities, operations and venues.

"Do we need all this space? All these services?" he said. "Which activities add real value? Do we need all of these test events?"

Asked whether the number of sports or athletes in the games were candidates for reduction, IOC President Thomas Bach said, "It would be wrong to reduce the number of athletes."

"We can simplify and reduce the cost of the games. That is our full concentration."

Asked about the possibility of the games being called off entirely due to the coronavirus pandemic, Mori said the local organizers and IOC had "never discussed cancellation."

The local organizers outlined three central principles for the postponed Olympics -- providing a safe and secure environment, minimizing costs to gain the understanding of Tokyo residents and the wider public, and simplifying the games for the sake of safety and sustainability.

The local organizing committee will review each item on the list and the IOC's Coordination Commission is expected to make a final proposal at the IOC executive board meeting in September after holding discussions with international sports federations.

The agreement between the local organizers and the IOC comes roughly a week after Mori reached a similar accord with Tokyo Gov. Yuriko Koike.

In Wednesday's meeting, the IOC executive board discussed how to manage the postponement of the games, which was decided in March due to the coronavirus pandemic.

The IOC is considering rationalizing many aspects of the games, including venues and transportation. It has told the sports federations it will confirm the venues and the competition schedule by this summer.

Japanese government sources last week said a reduction in the number of spectators and scaling back of the opening and closing ceremonies were among the steps being considered.

While the Tokyo Games organizing committee has not yet revealed how much extra the postponement will cost, the IOC decided at the previous executive board meeting in May that it will put up to $650 million toward organizing the games in 2021.

IOC President Bach said in an interview with BBC Sport last month that he accepts that the virus-hit Tokyo Games will have to be canceled if they cannot be held next year.

The Olympics and Paralympics, which were originally scheduled for this summer, were pushed back to the summer of 2021 after athletes and National Olympic Committees voiced fears over the virus, and a number of qualifying events had to be canceled.

The domino effect of the coronavirus could still be felt next year, however, when sports schedules around the world are adjusted from their normal windows due to this year's disruptions.

One concern is a potential conflict between the Olympics, starting on July 23, 2021, and a revised schedule for America's National Basketball Association.

Bach said he was in contact with FIBA, the sport's world body and said after the executive board meeting that there would be no conflict.

Conflict, or at least protest, was another issue of concern. The IOC has long held a hard line against political demonstrations, but the wave of protests sweeping the world against police brutality, forced Bach to define his stance.

He said the IOC would support non-divisive demonstrations in support of the Olympic principles, such as non-discrimination but stopped short of saying what kind of demonstrations should be allowed. Instead, he said merely taking part in the Olympics was a demonstration in itself.