China was prompted to seek a national security law on Hong Kong by its need to deter foreign forces from taking control of the former British colony, according to a pro-Beijing local legislator.

With critics pointing to the possibility the controversial law may curtail freedoms and rights in Hong Kong, Michael Tien, a member of Hong Kong's Legislative Council, made no pretense about its likely impact, saying that it will leave the people with "little space to talk politics."

The draft law was still under consideration by the standing committee of China's parliament, the National People's Congress, when its latest meeting ended Saturday. But it may be approved soon, possibly by the end of this month, as the committee is scheduled to meet again for three days from next Sunday. 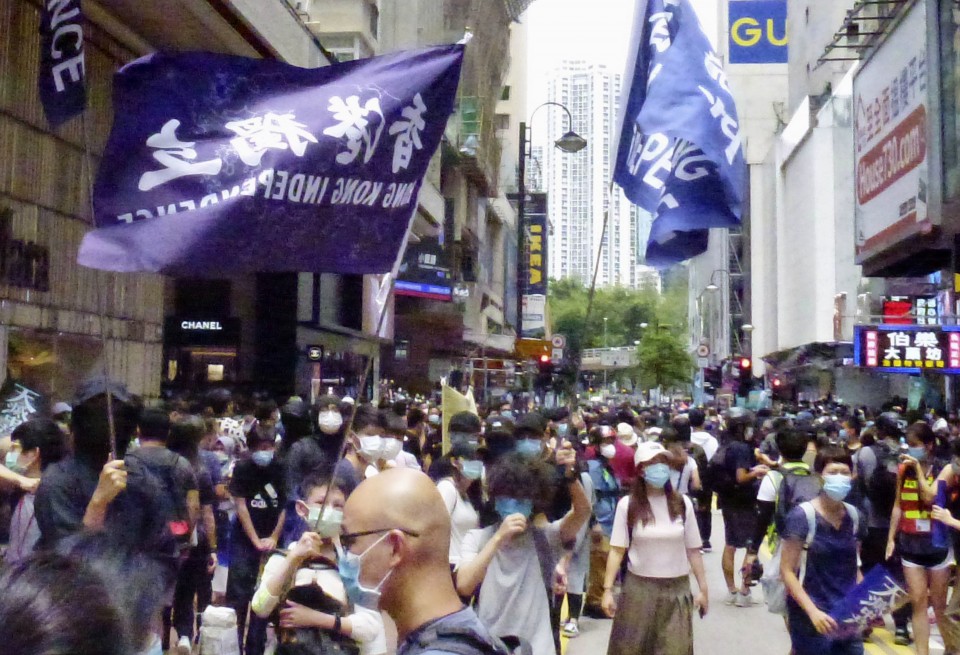 People protest in Hong Kong on May 24, 2020, against China's move to introduce the mainland's national security law in the territory, which is feared will hurt Hong Kong's autonomy. (Kyodo)

Some observers see the move tied to Beijing's effort to prevent pro-democracy forces from gaining the majority in the local legislature in the September election for the first time, following their electoral victory last November.

Tien said in a recent interview that China is determined not to let it happen because doing so would, in its view, amount to foreign forces taking control of the legislature, and therefore, Hong Kong.

The legislator is also one of Hong Kong's 36 deputies of the national parliament.

He explained that from Beijing's perspective, foreign forces have long fought with China over Hong Kong since its return to Chinese rule in 1997.

"Chinese officials have told me that the battle has been ongoing since the handover," Tien said. "Hong Kong people going abroad, meeting with the (U.S.) secretary of state and the House speaker, advocating for a democracy human rights act, asking for sanctions against Hong Kong and all that -- Beijing basically believes foreign forces were telling these people what to do."

FOCUS: China faces off with West in bid to keep Hong Kong under its clout

And in Beijing's view, after 23 years of the "high degree of autonomy" Hong Kong was allowed to enjoy, the territory's people are turning against China, with foreign influence growing strong, he said.

"The central authorities decided they have seen enough and are now tightening the leash."

At the height of anti-government demonstrations last year, pro-democracy advocates in Hong Kong lobbied the United States, among other foreign countries, for support.

The U.S. government subsequently enacted the Hong Kong Human Rights and Democracy Act, under which Hong Kong's autonomy would be scrutinized regularly by the State Department.

Beijing, however, is pressing ahead with the legislation, which would ban separatism, subversion, terrorism and collusion with foreign forces in Hong Kong.

According to the details of the draft law reported by state media Xinhua News Agency, China will set up a national security commission in Hong Kong overseeing enforcement of the law, among other stipulations.

The Hong Kong government sought in 2003 to legislate a national security law on its own as stipulated in the Basic Law, the territory's mini-constitution in effect since the handover. But the move failed after hundreds of thousands of people marched against it.

Tien said that since pro-democracy "Umbrella Movement" protesters occupied major thoroughfares in parts of the city for months in 2014, Beijing had concluded that foreign powers were involved.

Along came last year's anti-government protests, which were initially organized to oppose an unpopular extradition bill that would have enabled Hong Kong to send criminal suspects to the mainland for trial.

Tien said the tipping point for Beijing came not in June or July when the protests drew large numbers of people, but rather in October, when the country marked the 70th anniversary of the establishment of the People's Republic of China.

"Instead of having peace restored, more violent clashes erupted on the National Day," Tien said.

When the Hong Kong government later banned face coverings in public gatherings in the wake of intensifying violence, the new rule brought even more people on the streets.

"Beijing decided then the Hong Kong government was too weak and it has to take over and impose a national security law for Hong Kong," the legislator said.

Critics have blasted Beijing's move as breaching the high degree of autonomy Hong Kong was promised under the "one country, two systems" framework, but Tien argues the law simply reflects Beijing's tightening of the framework, not a violation.

He shared the view that once the legislation is enacted, going to the United States seeking for government sanctions -- something some prominent pro-democracy activists did last year -- would be illegal as it would constitute colluding with foreign forces, one of the prohibited acts under the proposed law.

Tien touted the legislation as helping make Hong Kong society more stable by curtailing political activities by foreign countries, and foresees little change in how people go about their lives, as long as they stay clear of politically sensitive matters.

"If you don't challenge the Communist Party, oppose the central government or seek foreign countries' sanction on Hong Kong, generally speaking, all is fine," he said.

But Tien said there will likely be much less freedom of speech in Hong Kong, and some people, especially young people, would be unhappy about it.

"Simply put, Hong Kong in the future will have little space to talk politics."