FOCUS: Olympics and virus make for stark election line but no move in needle

Candidates running in Tokyo's gubernatorial election have been hammering at each other over the capital's management of the coronavirus pandemic and the appropriateness of Tokyo hosting the Olympics and the Paralympics next year.

With a total of 21 challengers failing to build a united front against incumbent Gov. Yuriko Koike, both issues have facilitated her chances of winning the July 5 election for a second four-year term. 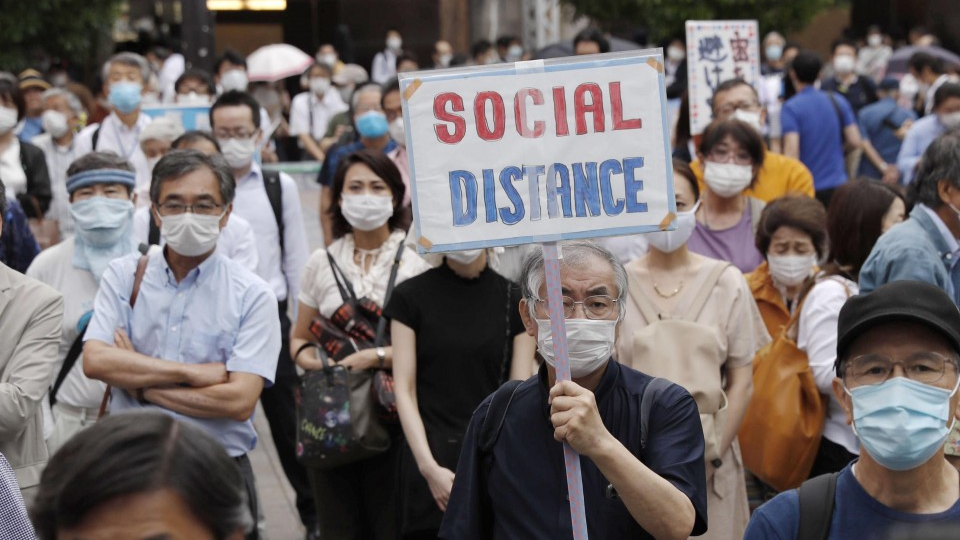 People listen to a stump speech by a candidate running in the July 5 Tokyo gubernatorial election in the Japanese capital on June 18, 2020. Attendees were asked to maintain social distancing to prevent coronavirus infections. (Kyodo)

A series of polls indicate the bulk of votes will go to Koike, who is running as an independent but is getting backing from about 70 percent of those aligned with the ruling Liberal Democratic Party and 90 percent of those with Komeito, the junior coalition partner of the LDP.

Koike's appeal was far-reaching, with 60 percent of unaffiliated voters and even 60 percent of supporters of the main opposition Constitutional Democratic Party of Japan -- which backs another candidate -- saying they plan to vote for her, according to a Kyodo News poll conducted over the weekend.

Koike has expressed eagerness to hold the Summer Games in 2021 by making them "simplified" and safe with reduced costs. She said her leadership will ensure Tokyo is well-prepared against the virus such as through a plan to establish a disease control center in the metropolitan area.

Her opponents' positions vary from outright cancellation to postponement by two to four years over worries that a second wave of COVID-19, the respiratory disease caused by the coronavirus, might be coming.

However, some watchers believe organizers' decision in March to postpone the Olympics and the Paralympics for a year increases the likelihood Koike will get re-elected. The postponement allows something positive for her to sell, embodying a sense of hope, they say.

"Her earlier decision to seek postponement of the Olympics gave her enough face-saving room because the games weren't canceled," said Koichi Nakano, a professor of political science at Sophia University in Tokyo.

"As we're getting to her re-election right now, she can still basically say she's going to make the Olympics a success," Nakano said.

According to the Kyodo poll, 31.1 percent of respondents said the games should be simplified, including being held without spectators, while 27.7 percent called for them to be canceled and 24.0 percent want them to be pushed back to 2022 or beyond.

Koike's opponents have argued her Olympics policy is unwise, leaving the capital vulnerable to the virus.

Taro Yamamoto, a former actor and leader of the anti-establishment party Reiwa Shinsengumi, has called for a complete cancellation, warning that "Tokyo will turn into a petri dish" if the games occur.

Yamamoto said that even if Tokyo itself beats the coronavirus pandemic, the rest of the world might not, stressing there is still no vaccine.

Kenji Utsunomiya, a lawyer backed by the CDPJ and two other opposition parties, is calling for cancellation if disease experts suggest so, while pointing out that "immense" expense could be saved and used to support Tokyo residents affected by the virus.

Taisuke Ono, a former vice governor of Kumamoto Prefecture who is backed by the opposition Japan Innovation Party, is for a renegotiation with the International Olympic Committee to postpone the games to 2024.

Giving the capital enough time to counter the pandemic and focus on boosting the economy will lead to a certainty of hosting the events, Ono argues.

But the pandemic has given Koike, a former news anchor, an opportunity to shore up support through her frequent media briefings, and seemingly rapid and decisive measures against the coronavirus compared with those of Prime Minister Shinzo Abe's government.

A JX Press Corp. poll found the support rate for Koike among Tokyo residents jumped 20 points in late May from March to 69.7 percent, and 76.6 percent said they appreciate her response to the pandemic.

Even though there may be those who do not think she has been successful in fighting the virus, "People have to have a very good reason why they'd want to change the leader at a time like this," said Sophia University's Nakano.

While Koike's major contenders have positioned themselves against her and along similar lines on the major issues facing the capital, they have been unable to unify, resulting in a vote split. 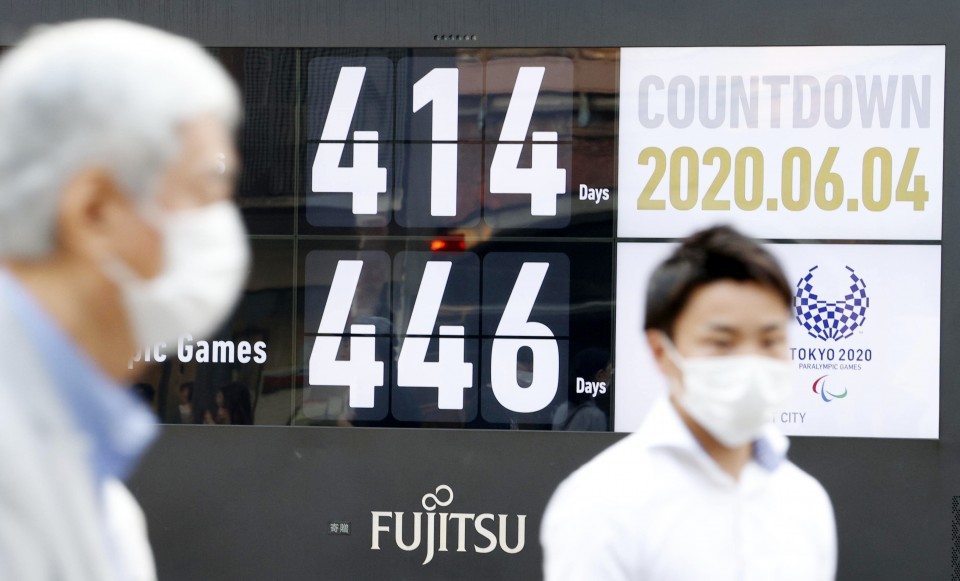 Photo taken on June 4, 2020, shows a Tokyo Olympics countdown board near Tokyo's Shimbashi Station. Japan may simplify the format of next year's Tokyo Olympics as part of efforts to prevent the spread of the novel coronavirus, according to government sources. (Kyodo)

But while a united candidate may be able to peel off some votes from Koike, defeating her would be difficult, as recent polls have suggested.

They say if she is unable to make good on her pledge for Tokyo to host the Olympics and Paralympics in 2021, she may not receive much blame if the decision is based on the pandemic.

But she could suffer criticism if the public finds the cost of hosting the Tokyo Games too much.

Estimates show the one-year postponement could cost an additional 300 billion yen ($2.8 billion), tacked on to the 1.35 trillion yen games.

The IOC has said it will pay $650 million toward the games, although expenses are expected to be several times more and the final cost division remains unclear.